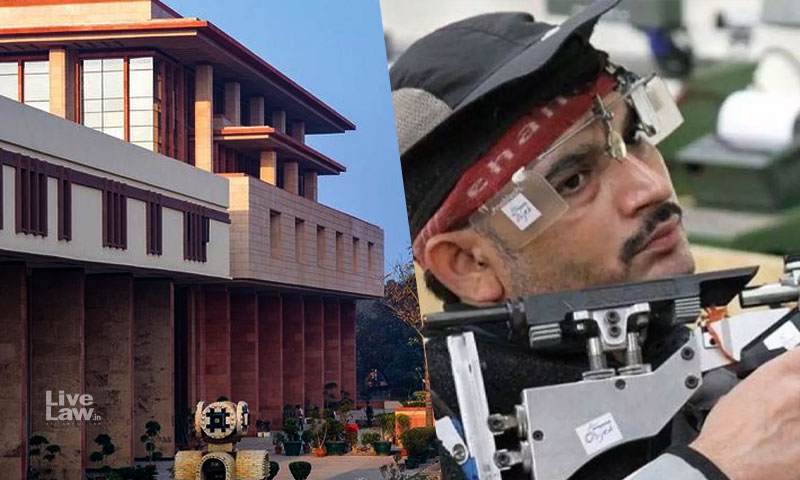 The Delhi High Court on Friday issued notice on an appeal preferred by Arjuna Awardee and five-time Paralympian shooter Naresh Kumar Sharma from a Single Judge order, refusing to interfere with the decision of the Paralympic Committee of India (PCI), the apex body for promotion and development of Para Sports in India, to not shortlist him for the Tokyo Games 2020. A Division Bench of...

The Delhi High Court on Friday issued notice on an appeal preferred by Arjuna Awardee and five-time Paralympian shooter Naresh Kumar Sharma from a Single Judge order, refusing to interfere with the decision of the Paralympic Committee of India (PCI), the apex body for promotion and development of Para Sports in India, to not shortlist him for the Tokyo Games 2020.

"This is a peculiar matter where all my submissions are admitted by the Single Judge. He has observed that there was biasness and favoritism in PCI's conduct. He has also ordered an investigation. But my prayer is denied. Such an order in a matter against an extremely corrupt body is against national interest," Singh argued.

Sharma had contended that the Selection Committee of PCI wrongly applied the eligibility criteria specified under the National Sports Development Code of India 2011, while shortlisting the candidates. He had complained that the Committee wrongly selected one Deepak to participate in Tokyo Paralympic in R7 event, in his place.

It is his case that to be eligible for participating in the 2020 Tokyo Paralympics, a para shooter must have participated in at least two international competitions approved by the WSPS (World Shooting Para Sports). Singh pointed out that the said Deepak had merely participated in one such event and the Committee has wrongly considered Serbia Grand Prix for calculating his marks, even though the said event is not a part of the recognized WSPS competition in terms of Rule 1.2 and 2.9.

In this backdrop, Singh informed the Court that there are three slots for each event. However, one slot is given in a manner which is not beholding of an organization. "This is mounting to favourtism," he remarked.

At this juncture, the Bench asked as to when the event is starting. Sharma responded that the deadline for submitting the application forms is August 2 and the event is scheduled to start from August 25.

Significantly, the Bench denied Singh's request to hear the matter on coming Monday.

"You are coming at the last moment. We have issued notice within 2 minutes. We understand the urgency but when you're coming on the last day, we will not allow such requests," the CJ remarked.

Sharma has stated that the single judge had erred in not considering the facts of the case "in proper perspective" and in not allowing the prayers despite noting the fact that the PCI acted in violation of its own criteria for selection of Paralympic Shooting Team.

"For that, the Ld. Single Judge noted that it is an undisputed position that the Detailed Selection Criteria uploaded by the PCI on its website had set out eight events whose scores could be used to calculate the final average score (FAS) of an athlete aspiring to compete at the 2020 Tokyo Paralympics. The Ld. Single Judge further noted that it is also a matter of record that the Novi Sad Grand Prix was not one of the qualifying events listed either by the PCI or the IPC. Despite noting these material facts, the Ld. Single Judge held that the decision of PCI to accept the Novi Sad Grand Prix scores of respondent no.4 to calculate his average Score, cannot be found fault with," the plea reads.

In his original plea, Sharma averred that he fulfills all the eligibility criteria as laid down by the Sports Technical Committee (STC) shooting of PCI in consonance and in conformity with the eligibility criteria as laid down by WSPS (World Shooting Para Sports). However, he alleged that the Selection Committee of the PCI in the arbitrary, capricious, and discriminatory exercise of discretion failed to select him for the Tokyo Paralympic Games.

On the other hand, the PCI contended that its endeavor was to select the best candidates for the games and that Deepak was found to be the one with the highest score in the relevant category. It was also informed to the Court that the Serbia Grand Prix was one of the World Shooting Para Sports (WSPS) events in which Sharma voluntarily chose not to participate.

Considering the submissions, the single judge had observed that the conduct of the PCI in permitting Deepak to participate in the Serbia Grand Prix after getting clarification from its parent body could not be faulted with by the Court.