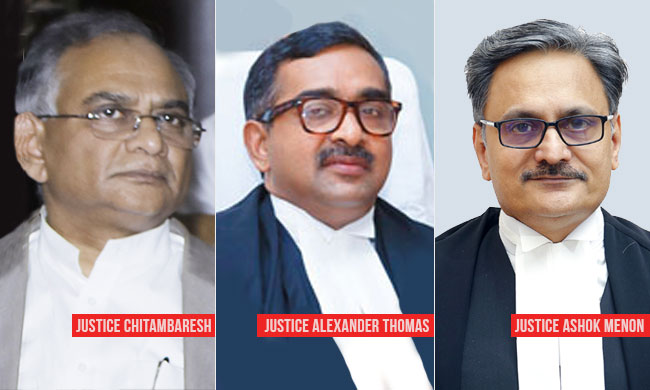 Mere provision of transportation facilities to the students is not a substitute to establish schools for elementary education, the Kerala High Court has held. The Judgment of the full bench comprising of Justice V. Chitambaresh, Justice Alexander Thomas and Justice Ashok Menon starts with a famous Sanskrit saying: "Vidya Dhanam Sarva Dhanath Pradhanam" (Knowledge is supreme of all...

Mere provision of transportation facilities to the students is not a substitute to establish schools for elementary education, the Kerala High Court has held.

The bench was answering the reference doubting correctness of the decisions in Kum. Sreya Vinod v. Director of Public Instruction and others  and T.K.M.M.L.P. & U.P.School v. State of Kerala and others

These cases arose out of writ petitions filed by educational agencies aggrieved with the fact that their applications to re-structure the schools by introducing classes in tune with the Right to Education Act are not favourably considered even after nine years. The state defended the non consideration on the ground that transportation facilities have been provided and that a child can seek transfer to another school for completing elementary education. Additional financial burden on the State exchequer to pay the teachers for the additional classes to be introduced in the schools is another aspect pointed out by the state.

Considering the submissions, the bench observed that the State Government cannot shirk its duty to establish schools having classes 1 to 5 every one kilometre and of schools having classes 6 to 8 every three kilometres as specified in Rule 6(1) of the Rules. The State Government cannot wriggle out of its obligation under the Act on the premise that a child has got a right of transfer to other school under Section 5 of the Act, it added.

"We should emphasise that a child is not to be treated as a chattel to be tossed about from one school to another for completion of elementary education which the Act has envisaged as explained above. Mere provision for easy transport from one school to the other or for the issue of a transfer certificate from the existing school is not one contemplated by the Act. A re-structuring of all the schools with uniform classes from 1 to 8 imparting elementary education is the scheme envisaged by the Act which cannot be trampled upon by any State. An immediate leap of schools having classes 1 to 4 and 6 to 8 into an uniform structure of classes 1 to 8 may incur heavy financial burden on the State all on a sudden. We are not oblivious of the fact that both the Central Government and the State Government shall have concurrent responsibility to share the financial commitment under Section 7 of the Act. The State cannot at any rate refuse permission to add class 5 to schools having classes 1 to 4 and add class 8 to schools having classes 5 to 7 as a preliminary step under the Act. The educational need as contemplated under the Kerala Education Act, 1958 and the Kerala Education Rules, 1959 pales into insignificance after the Act and the Rules."

Referring to Rule 6(4) of the Kerala Right of Children to Free and Compulsory Education Rules, 2011, the bench said:

Rule 6(4) of the Rules applies only for children from small hamlets identified by the Government or the local authority where no school exists within the neighbourhood as in the tribal area of Attappady. The intention is that no child even from a small hamlet shall suffer for want of transportation to school and the statute ensures that elementary education is completed without any hassles. The State cannot take refuge under Rule 6(4) of the Rules from establishing schools for elementary education mandated by Section 19 of the Act and Rule 6(1) of the Rules.

Overruling the above referred judgments, the bench held that the order of the General Education (F) Department which states that 'providing transportation facility will suffice their educational need' is arbitrary. It observed.

"Providing transportation facilities by the State under Rule 6(4) of the Rules is for a specified contingency referred to earlier and is not a substitute to establish schools for elementary education. The statutory duty cast on the State under Section 19 of the Act read with Rule 6(1) of the Rules is not discharged by providing transportation facilities as held in the decisions afore-quoted."

The bench then directed the department to consider applications of the educational agency to upgrade the existing schools in light of the above pronouncement.