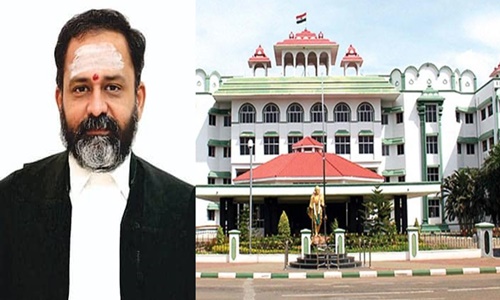 x
"gender identity falls within the domain of her personal autonomy and involves her right to privacy and dignity. It is not for the State authorities to question this self determination"

In a notable judgment, the Madurai Bench of Madras High Court has directed the authorities to register a marriage solemnized between a man and a transwoman.

They approached the High Court after the the registration authorities had refused to recognize and register their marriage solemnized in a temple. The authorities stated that a transwoman cannot be treated as 'bride' as per Section 5 of the Hindu Marriage Act 1956.

While allowing the petition, Justice G R Swaminathan, referred to judgments of the SC in NALSA, Puttuswamy(privacy case) and Navtej Johar(decriminalization of homosexuality) cases and observed that 'personhood' of transgender persons has been recognized under Indian Constitution.

"...after making an exhaustive reference to the human rights jurisprudence worldwide in this regard, the Hon'ble Supreme Court held that Article 14 of the Constitution of India which affirms that the State shall not deny to "any person" equality before the law or the equal protection of the laws within the territory of India would apply to transgenders also. Transgender persons fall within the expression "person" and hence entitled to legal protection of laws in all spheres of State activity as enjoyed by any other citizen of this country", said the judgment.

Justice Swaminathan observed that "gender identity falls within the domain of her personal autonomy and involves her right to privacy and dignity. It is not for the State authorities to question this self determination of the second petitioner herein".

The contention of the authorities that a transwoman will not come within the ambit of 'bride' as per definition of Hindu Marriage Act was rejected by the Court.

"When the right of the transgender persons to marry has been upheld by the Hon'ble Supreme Court, in the very nature of things, they cannot be kept out of the purview of the Hindu Marriage Act. One can have a civil marriage. One can also have a sacramental marriage. The petitioners' marriage was solemnized in a temple. Therefore, their fundamental right under Article 25 has also been infringed in this case", said the Court.

"...the expression "bride' occurring in Section 5 of the Hindu Marriage Act, 1955 will have to include within its meaning not only a woman but also a transwoman. It would also include an intersex person/transgender person who identifies herself as a woman. The only consideration is how the person perceives herself", added the Court.

Based on the works on intersex activist Gopi Shankar of Madurai, the Court  took note of the issue of rampant practise of compulsory sex reassignment surgeries performed on inter-sex infants and children.

"When a child is born it is usually endowed with male genitalia or female genitalia. But there are children who are born with a genitalia that belongs to neither category. They are known as intersex children", explained the Court.

The Court said that they must be given their time and space to find their true gender identity. But the parents make the infant undergo sex reassignment surgery (SRS).

Gopi Shankar had highlighted this practise in a complaint to the National Human Rights Commission, which was forwarded to the Ministry of Health. The Health Ministry's response, which the Court termed "strange", stated that the process was done with the consent of parents/guardian of the child and that isolated cases of abuse can be addressed by appropriate authorities.

In this regard,the Court said "consent of parent cannot be regarded as the consent of the child".

"...neither the father nor the mother can claim suzerainty over the child and in the ultimate analysis, the children are not the children of their parents", the judgment quoted Justice Chandru.

The Court took notice of a report of the World Health Organization calling for deferment of intersex genital mutilation (IGM) until the intersex persons are old enough to make decisions for themselves.

"the Hon'ble Supreme Court in NLSA case categorically stated that no one shall be forced to undergo medical procedures, including SRS, sterilisation or hormonal theraphy, as a requirement for legal recognition of their gender identity. But, what is happening in reality is more in breach of this judgement given by the Hon'ble Supreme Court", said the Court.

On this basis, it ordered :

The parents must be encouraged to feel that the birth of an intersex child is not a matter of embarrassment or shame, added the judgment.