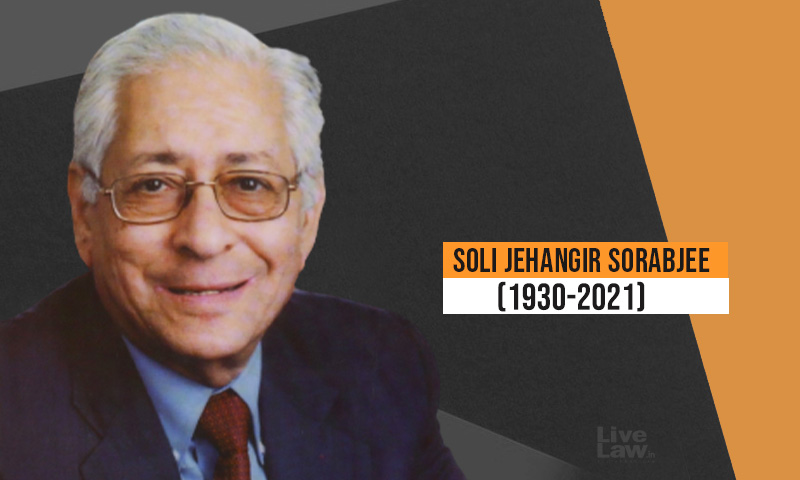 Former Attorney General for India and veteran jurist, Soli Sorabjee passed away on Friday morning. The 91-year-old Sorabjee was undergoing treatment at a private hospital in Delhi.Following the news of his demise, tributes started pouring in. Chief Justice of India N. V. Ramana said,"Shri Soli J Sorabjee served the office of Attorney General of India twice with great distinction. His humane...

Former Attorney General for India and veteran jurist, Soli Sorabjee passed away on Friday morning. The 91-year-old Sorabjee was undergoing treatment at a private hospital in Delhi.

"Shri Soli J Sorabjee served the office of Attorney General of India twice with great distinction. His humane and compassionate approach defined his legal work. His body of work, spread over nearly seven decades, in defending fundamental rights and human rights is of international repute. He will be remembered as a legend who added strength to the pillars of democracy. I pay my deep respect to the departed soul. Condolences to the family, friends and fans."

"I am deeply saddened to learn about the passing of Shri Soli Jehangir Sorabjee, former Attorney General of India. In his nearly 68-year long association with the judicial world, he made an immeasurable contribution in enriching the global jurisprudence of Human Rights and Fundamental Rights.

The matters that he had argued before the Courts and the judgments that he could secure; the books, essays, papers of international repute and the newspaper articles that he had authored; the independent opinions he could tender to the Government in his capacity as the Attorney General – they all stand testimony to his deep commitment to democratic values.

He not only lived up to the mandate of the Attorney General as enshrined in the Constitution but also raised the bar in the discharge of his Constitutional duties. Being a champion of 'Freedom of Press', he effectively used the media as a platform to elucidate the nuances of complicated legal issues on almost daily basis till recently, literally giving lessons of law to millions of common people who otherwise could not have followed what was happening in the judicial world.

His ability to adapt to the new trends in media was remarkable. I have personally gained immensely from reading his works, listening to his lectures and arguments, and his sagacious guidance and advise, since the time I started practicing as an advocate. SUPREME COURT OF INDIA (PUBLIC RELATIONS OFFICE) His humane and compassionate approach defined his legal work.

He will be remembered as a legend who added strength to the pillars of democracy. I pay my humble tributes to the departed soul. I convey heartfelt condolences to the family, friends and countless fans of Shri Soli Sorabjee, on my own behalf and on behalf of the Supreme Court of India where he will continue to command respect forever"

The President of India, Ram Nath Kovind said that he was among the "select few who deeply influenced the evolution of constitutional law & justice system."

Calling him "an outstanding lawyer and intellectual", Prime Minister Narendra Modi said that he would be remembered for his noteworthy tenures India's Attorney General.

Former Union Minister for Law and Justice, Dr. Ashwani Kumar called him "doyen of the legal profession" and said that he first met him around the time when the Keshavananda Bharti case was being argued in the Supreme Court when Dr. Kumar was still a student of law.

Union Home Minister, Government of India, Amit Shah said that he would "always be remembered for his contribution in the field of constitutional law".

Law & Justice, Communications, Electronics & Information Technology Minister of India, Ravi Shankar Prasad called his demise "the end of an era in the legal and judicial history of India"

Senior Advocate P. Chidambaram said that "the passing away of Mr Soli Sorabjee is a big loss to the world of law and justice."

Calling him an "exceptional legal mind and a great scholar of our constitution", the Defence Minister of India Rajnath Singh said that his services to the nation would always be remembered.

Senior Advocate Kapil Sibbal remembered him and said that he would "always be remembered for not only his signal contributions to law but also for his undying commitment to the cause of individual liberty & for the freedom of Press."

Born in 1930 in Bombay, Soli Jehangir Sorabjee began his legal practice in the year 1953 at the Bombay High Court. He was designated as a Senior Advocate by the Supreme Court of India in 1971. He became the Attorney General of India, first from 1989-90 and then from 1998-2004.

Sorabjee is a renowned human rights lawyer. He was appointed by the UN as a Special Rapporteur for Nigeria, in 1997, to report on the human rights situation in that country. Following this, he became a member and later Chairman of the UN-Sub Commission on the Promotion and Protection of Human Rights, from 1998 to 2004.

He is a member of the United Nations Sub-commission on Prevention of Discrimination and Protection of Minorities since 1998. He has also served as a member of the Permanent Court of Arbitration at The Hague from 2000 to 2006.

Sorabjee was also involved in many cases for defending the freedom of speech and expression and has been instrumental in revoking censorship orders and bans on publications. His publications on this subject include The Laws of Press Censorship in India (1976); The Emergency, Censorship and the Press in India, 1975-77 (1977).

In March 2002, he was honored with the Padma Vibhushan award for his defense of freedom of speech and the protection of human rights.