"UCC Is Long Due; Can't Be Made Voluntary": Allahabad HC Calls Upon Central Govt To Implement The Mandate Of Article 44 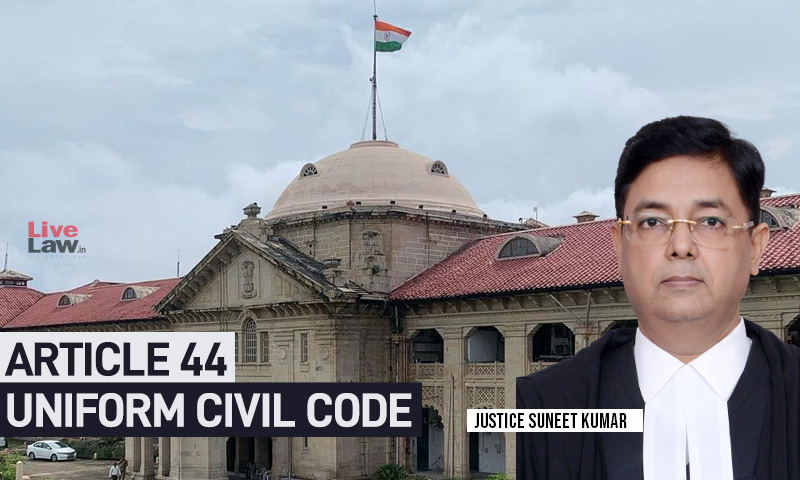 Dealing with a batch of petitions (17 in number), pertaining to an interfaith marriage contracted by the petitioners and seeking protection from the Court, the Allahabad High Court today called upon the Central Government to implement the mandate of Article 44 of the Constitution of India [Uniform Civil Code]. The Bench of Justice Suneet Kumar observed that the issue of UCC,...

Dealing with a batch of petitions (17 in number), pertaining to an interfaith marriage contracted by the petitioners and seeking protection from the Court, the Allahabad High Court today called upon the Central Government to implement the mandate of Article 44 of the Constitution of India [Uniform Civil Code].

The Bench of Justice Suneet Kumar observed that the issue of UCC, though Constitutional, rakes political overturns whenever raised or debated in the public domain and called for its implementation in the wake of a multiplicity of marriage and family laws in place.

"A belief seems to have gained ground that it is for the minority community to take a lead in the matter of reforms of their personal law. That has been the consistent official stand of the Government within the country and in international forums. A common civil code will help the cause of national integration by removing disparate loyalties to laws that have conflicting ideologies. No community is likely to bell the cat by making gratuitous concessions on this issue. It is the State which is charged with the duty of securing a uniform civil code for the citizens of the country and, unquestionably, it has the legislative competence to do so," the Court significantly observed.

Referring to the 21st Report of the Law Commission of India, the Court noted that just one year after the Law Commission said that 'uniform civil code is neither necessary nor desirable at this stage', the Supreme Court had, in Jose Paul Coutinho vs Maria Luiza, said that UCC should be enacted as 'the stage' has reached the citizens of the country.

In this regard, the Court said that it has its own limitations and it cannot embark the activist role of providing a civil code and that the Parliament has to step in and initiate the process of enacting the UCC by appointing a committee, and/or, making a reference to the Law Commission.

"The piecemeal attempts of courts to bridge the gap between personal laws cannot take the place of a common civil code," the Court further observed.

The Court, in an attempt to envisage the possible effect of UCC on the Indian population, if implemented, referred to the Hindu Family Code, which, in the Court's opinion, acted as a uniform civil code and integrated the citizens into an integrated and united Hindu citizenry, on terms that is equal and uniform, insofar as the law regulating family law is concerned.

Stressing that the impact of HFC on Hindu society has been phenomenal, the Court opined that HFC has not encroached upon the religious custom, culture, practice, and propagation of the minuscule minority i.e. Sikhs, Buddhists, and Jains, included within the definition of Hindus.

Deliberating upon the Hindu Family Code, the Court observed that the HFC can be said to be the UCC governing the Hindus and the communities, falling within the ambit and definition of 'Hindu and that it covers and has sway over 80 percent of the population.

Significantly, the Court noted that the HFC laid the foundation of transforming the traditional Hindu society, and the legislations lifted and transported the Hindu personal law from the Shastra/Religion and placed it within the domain of the Parliament.

"Parliament through HFC in a single stroke provided a legal platform where Hindu citizens could interact with each other on equal terms irrespective of rigid Hindu social order embedded in rigid caste, jati, creed, gotra and the concept of purity, pollution in marriage and dining. 88. HFC has been largely instrumental, (apart from other factors viz. education, mobility, health services), in facilitating, and creating, what the sociologist refer to as a Hindu 'social class', and/or a Hindu 'citizenry'," noted the Court.

Importantly, the Court observed that the area that immediately demands the attention of the Parliament is with regard to the interfaith relationships and noted that the answer to regulating such relations is through legislative intervention by enacting the UCC.

Lastly, the Court remarked that the Government, if decides to initiate the process by appointing a Committee/Commission for enacting the UCC, it would take considerable time, and therefore, the process should be initiated forthwith.

Thus, calling upon the Government of India to initiate the process as the 'stage' has been reached, the Court concluded by observing thus:

"The UCC is a necessity and mandatorily required today. It cannot be made 'purely voluntary' as was observed by Dr. B.R. Ambedkar 75 years back, in view of the apprehension and fear expressed by the members of the minority community."