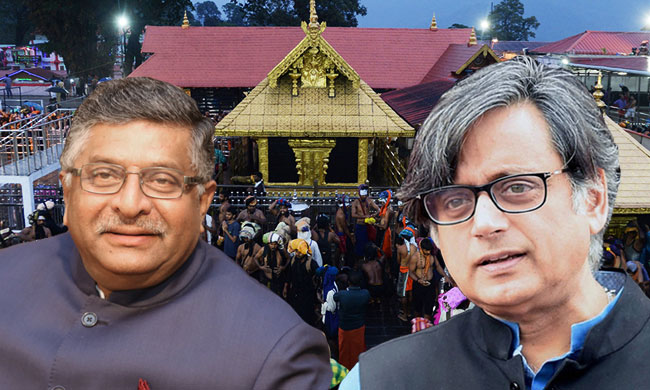 Dr. Shashi Tharoor, MP from Thiruvananthapuram, asked the Union Law Minister Ravi Shankar Prasad in Lok Sabha on Wednesday whether the Central Government is considering or is in the process of drafting any legislation, including an amendment to the constitution, to overturn the Sabarimala judgement of the Supreme Court "to restore the traditions of the temple".

In response, the Law Minister refused to give any details and merely stated that the "matter is sub judice".

Dr. Tharoor has taken a stand against allowing the entry of women of all age groups in Sabarimala temple and has been vocal in his criticism of the September 28 judgment of the Supreme Supreme Court which removed the ban on women entry to the hill top shrine.

Sabarimala matter was a major election issue in Kerala in the recently held general election, with the Prime Minister Narendra Modi and the then BJP President Amit Shah raising it during their campaign. In a road show held in Pathanamthitta district where the temple is located, Shah had said ""We will do everything possible to protect the faith of Sabarimala pilgrims", while appealing for votes for BJP candidate K Surendran.

BJP had mentioned the issue in their election manifesto as well, by stating that it will "undertake every effort to ensure that the subject of faith, tradition and worship rituals related to Sabarimala are presented in a comprehensive manner before the Hon'ble Supreme Court" and that it will "endeavour to secure constitutional protection on issues related to faith and belief."

On June 22,  NK Premachandran, MP from Kerala, introduced a private member bell having effect of overturning the Supreme Court verdict in Sabarimala case.

The Constitution Bench of the Supreme Court has reserved orders on review petitions in Sabarimala case on February 6, after hearing the arguments in a bunch of review petitions filed by the Travancore Devaswom Board, Pandalam Royal Family, and groups of devotees against the September 28 judgment, which declared right of women of all age groups to enter the temple.

Read the query and reply