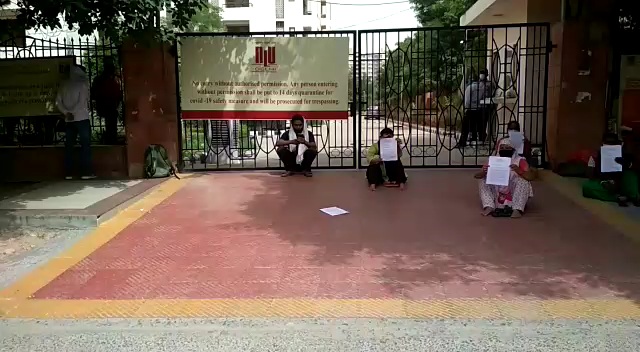 The NLUD Workers-Students Solidarity group has issued a statement asserting that the University cannot "shrug responsibility" on the issue of alleged illegal termination of its sanitation staff, at this stage. "The matter of reinstatement of Safai Karamcharis and cancellation of contract is not just between the contractor and the workers. The University, being a principal employer,...

The NLUD Workers-Students Solidarity group has issued a statement asserting that the University cannot "shrug responsibility" on the issue of alleged illegal termination of its sanitation staff, at this stage.

"The matter of reinstatement of Safai Karamcharis and cancellation of contract is not just between the contractor and the workers. The University, being a principal employer, has clear obligations under the law. The University Administration has been a part of the meetings with the Labour Ministry and has actively participated in the process, even in the absence of the contractor. Moreover, the Written Order is addressed to the University Registrar, NLUD and not the contractor," the group said.

The statement has been issued in response to a press note released by the University, stating that it has no legal obligation for employment/ termination of sanitation staff.

Relationship between the University and the workers

The students said that it is the University that exercises control and supervision over the workers, through its officers - the Assistant Registrar and the Wardens, and not the contractor. Therefore, they have claimed that the University has an obligation towards these workers and it cannot claim that it only 'hire services and not workers',

"The workers have always approached the Assistant Registrar for sanctioning leaves. The job profile of the Assistant Registrar itself explicitly entrusts him with responsibility of the housekeeping staff. The Contractor or the Field Officers never came into the picture. In fact, they have hardly ever come to the college to deal with such matters in the past 12 years. Furthermore, the Wardens of the University were involved in assigning the floors of the University buildings to all the workers," the students stated in an attempt to establish the employer-employee relationship between the University and the workers.

Significantly, in its Statement dated June 22, the NLU-D administration had said that "the workers have no enforceable rights vis-vis principal employer for continued retention and hence any direction to retain them after the termination of contract is without any legal basis."

Opposing this stance, the students stated,

As regards the offer of alternate employment made by the Contractor to the safai karmcharis on the basis of the University's "humanitarian" request, it is stated the same is a "mere façade" as it does not address the concerns of the workers and was therefore, unanimously rejected.

"The workers feared victimization and exploitation at the hands of the new contractor if they were to accept such an offer by the new contractor. Since the duration of contract and job security at the alternate sites has not been specified at all, it is plausible that the contract might be for a short duration rendering them unemployed again in a few months. Therefore, despite the 'magnanimous' move by the University administration in persuading RMG to retain the workers, these serious apprehensions of the Karamcharis about working with a new and unknown contractor, which was introduced to them at a moment's notice, cannot 24 June 2020 Page 3 of 5 be simply disregarded," the students said.

The University had claimed that the Labour Ministry's order to reinstates all the workers directly impinge upon the institutional "autonomy" of the University, which is a "sacrosanct" under the NLUD Act, 2008, and as also recognized by the Supreme Court in State of Punjab & Anr. v. Sardari Lal & Ors.

Refuting this stance the students have asserted,

"The Labour Ministry is well within their powers to pass the present Order dated 17.06.2020 on the issue of sanitation services, making this a 'legal and reasonable process'. It is wholly consistent with principles of natural justice, due process and has been reached through the University's active representations before the Ministry. The University cannot, in the face of an unfavourable outcome, distance itself from this fairly reached outcome."

"State of Punjab And Anr. vs Sardari Lal And Ors, as cited by the University, deals with the issue of autonomy with respect to permanent employees and a university's power to grant 'increment and allowance to its employees'. The present matter is evidently unrelated and distinguishable."

The student protests in question began on January 4 this year against termination of the contract with White Fox and Golden which resulted in the disengagement of 55 contractual workers, (allegedly without any prior notice).

The students have been demanding 100% retention of all old contractual workers and seek that the new contract with RMG be cancelled. Reminding the University administration that saving manpower beyond 20% amounts to exploitation, the students insisted that the University should strictly comply with all labour laws and other statutory provisions.

Giving a factual position of the matter on June 22, the University said that it hired the services of house-keeping staff through a contractor in 2008, without any legal requirement for assessment of manpower requirement. However, guidelines for the same were issued by the Delhi Government in 2012, pursuant to which the State Audit Team as well as the CAG Audit Team asked the University to float fresh tender for outsourcing the services of safai karmcharis.

It was stated that following the norms to assess the requirement of safai karamcharis, the University had to a float fresh tender, which was awarded to the present contractor RMG. Further, since the tenure of earlier contractor White Fox and Golden was over, its manpower was withdrawn.

It was further stated that the entire process is legally sound in light of the law laid down by the Supreme Court in Bharat Heavy Electricals Ltd. v. Mahendra Prasad Jakhmola & Ors., to determine the relationship of employer and employee.