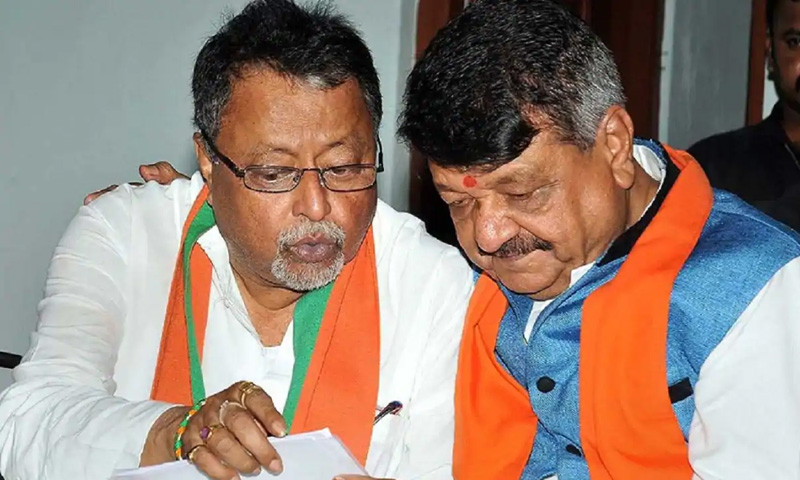 The Calcutta High Court on Tuesday stayed the police investigation against BJP leaders Kailash Vijayvargiya, Mukul Roy and two others in connection with a FIR over participation in a demonstration on October 7 which the State had deemed unlawful."The petitioners had participated in a demonstration on the October 7, 2020 which the State had deemed unlawful and an FIR dated October 8, 2020 has...

The Calcutta High Court on Tuesday stayed the police investigation against BJP leaders Kailash Vijayvargiya, Mukul Roy and two others in connection with a FIR over participation in a demonstration on October 7 which the State had deemed unlawful.

"The petitioners had participated in a demonstration on the October 7, 2020 which the State had deemed unlawful and an FIR dated October 8, 2020 has been registered by Hastings Police Station", noted Justice Rajasekhar Mantha, hearing their plea for quashing of the said proceedings.
Senior Advocate Sekhar Basu, for the petitioners, submitted that FIR has been registered in violation of and completely ignoring the law laid down by the Supreme Court of India in the 2012 case of Ramlila Maidan Incident. "Freedom of speech, right to assemble and demonstrate by holding dharnas and peaceful agitations are the basic features of a democratic system. The people of a democratic country like ours have a right to raise their voice against the decisions and actions of the Government or even to express their resentment over the actions of the Government on any subject of social or national importance. The Government has to respect and, in fact, encourage exercise of such rights. It is the abundant duty of the State to aid the exercise of the right to freedom of speech as understood in its comprehensive sense and not to throttle of frustrate exercise of such rights by exercising its executive or legislative powers and passing orders or taking action in that direction in the names of reasonable restrictions. The preventive step should be founded on actual and prominent threat endangering public order on tranquility, as it may disturb the social order. This delegated power vested in the State has to be exercised with great caution and free from arbitrariness. It must serve the ends of the constitutional rights rather than to subvert them.", it was cited from the judgment for the High Court's perusal.

On the other hand, the Additional Public Prosecutor argued that this Court should not entertain the instant revisional application since there is a Special Bench constituted for the said purpose of proceedings against Members of the Legislative Assembly and Members of Parliament. He submitted that one of the petitioners is a Member of Parliament. He undertook to produce the relevant notification on the next date in support of his argument.

"This Court is of the prima facie view that matters are heard by a vacation bench of the High Court based on an allocation made by the Hon'ble Chief Justice or His designate. Such allocation is made irrespective and independent of normal and special determination allocated during regular Court function", observed the Single Judge.

However, the Single Bench allowed the State to produce the notification on November 26, ordering that "in the meantime, however, the investigation into the FIR dated 8/10/2020 shall remain stayed".

As reported by the PTI, the FIR was lodged against the petitioners over alleged unruly incidents during the party's march to the state secretariat on October 8. BJP national general secretary in-charge of West Bengal Kailash Vijayvargiya, party national vice president Mukul Roy, Lok Sabha MP Arjun Singh and another leader Rakesh Singh had moved the high court seeking quashing of proceedings against them in connection with the case filed at the Hastings police station in Kolkata. The petitioners claimed that they have been accused in trumped up charges. Violence had erupted in Kolkata and adjoining Howrah on October 8 as BJP activists tried to get past barricades put up by the police to stop their rally to the secretariat 'Nabanna'.