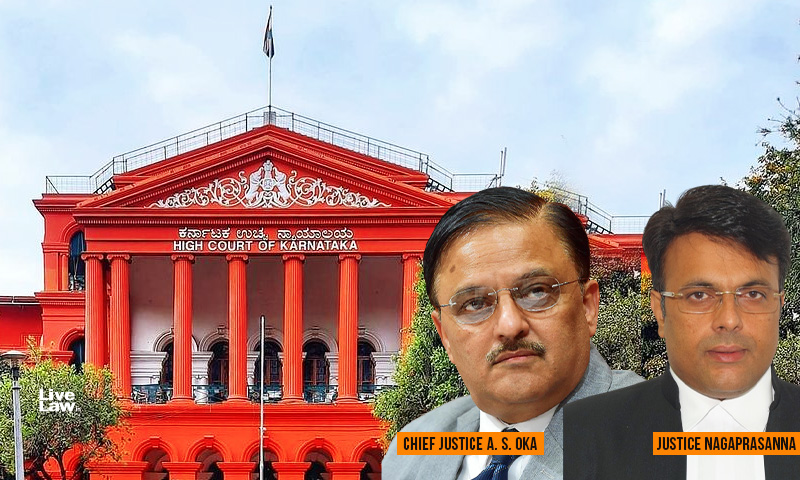 Observing that "...openly in daylight, the orders of the court are defied, this is sheer lawlessness, the State government cannot be a party to this and it must take immediate action," the Karnataka High Court on Wednesday directed the Commissioner of Police Bengaluru to personally look into the matter regarding the unveiling of the Shiva Statue constructed on the artificial island, inside...

Observing that "...openly in daylight, the orders of the court are defied, this is sheer lawlessness, the State government cannot be a party to this and it must take immediate action," the Karnataka High Court on Wednesday directed the Commissioner of Police Bengaluru to personally look into the matter regarding the unveiling of the Shiva Statue constructed on the artificial island, inside the Begur lake, allegedly by right-wing groups, the construction of which has been stayed by the court.

A division bench of Chief Justice Abhay Oka and Justice M Nagaprasanna in its order noted,

"A shocking incident of unveiling Shiva Idol installed by BBMP on Begur lake island has been brought to the notice of this court. Our attention is invited to the interim orders dated August 30, 2019, September 17, 2019 and 22 February 2021, which in no uncertain terms prohibit the said activity."

It added, "We direct the AGA to forward a copy of the memo along with annexures to the Commissioner of Police Bengaluru, who will personally look into the matter and initiate action in accordance with the law."

Advocate S H Prashant appearing for the BBMP informed the court that today, at 11.45 pm, the statue has been covered again. Advocate for the State government informed the court that the videos of the appeals made by the persons have been uploaded on social media. The State said that they will look into it and take appropriate action but someone has to put the criminal law into motion. To this, the court orally said "Openly in daylight, orders of the court are defied by making an appeal, the state must act on its own."

Further, the court in its order said

"BBMP says status quo ante has been restored today by again covering the statute and by removing the flags on the island. If anyone is aggrieved by the orders passed by this court he has statutory remedies available. Those who are aggrieved by the interim orders of the court could have always challenged them or applied to the court for intervention to the court seeking to modify the orders."

It added, "If what is stated in the memo is correct, the practice of defying orders of the court in this fashion has to be deprecated by all concerned. We direct the state to ensure that police keep constant vigil near the island created in the Begur lake."

The bench opined that,

"Orders passed by this court from time to time if perused, it will be clear that all orders are to ensure that existing lakes within the city are protected and lakes which have disappeared over the passage of time are restored and rejuvenated. The issue involved about the Begur lake is about the action of BBMP of creating artificial islands for installing statues.The issue involved is a legal issue, whether an island can be constructed in the midst of a lake. There is no religious issue involved in this group of petitions."

As per the order dated August 30, 2019, the court had stalled the construction of the statue in the lake island by the BBMP.

"Prima facie, BBMP has no authority to reduce the area of the lake and to make islands in the lake. In view of the doctrine of Public Trust, BBMP cannot reduce the area of the lake." It had added "Till BBMP responds to this affidavit, we direct the BBMP not to carry on any work of building islands within the lake area of 137.24 acres. We also direct the BBMP to ensure that no work is carried out so as to reduce the existing lake area without the leave of the Court". In a subsequent order, the court has even directed the BBMP to take a clear stand on the removal of the idol.

How The Unveiling of Statue Took Place:

The memo filed before the High Court states that on 31.07.2021, a video is published on the Facebook page of one Puneeth Kerehalli with the caption "Hindus Beware Of The Christian Missionary Conspiracy To Remove Shiva Statue – Hindu Organisations Must Come Together".

A person who appears to be the owner of the Facebook page, Puneeth Kerehalli, pointing to the veiled statue of Shiva in Begur lake says that he has brought Hindu workers to the location to fight against the interruption of the installation of the Shiva statue on Begur lake.

Further, it is mentioned in the memo that the persons said that a revolution has commenced on this day and that if anyone comes in the way of the inauguration of the statute or attempts to remove it or change its location, it will be met with violence.

On 03.08.2021, Puneeth Kerehalli published on his Facebook page images of the veiled Shiva statue in Begur lake and a Times of India report published on 18.09.2019 with the caption "Bengaluru: Stay order on Shiva statue in Begur lake to continue" side-by-side and captioned his post as follows: "See How These Christian Missionaries Use Our Constitution And Law To Work Against Our Hindu Dharma 40 Feet Shiva Idol Lying Waste Since Three Years"

On the same day, on 03.08.2021, a poster published on the Facebook page of Postcard Kannada showed side-by-side photos of the veiled and the unveiled Shiva statue with the following caption: "In Bangalore's Begur 75% Of Hindus Have Been Converted There A 40 Feet Shiva Statue Was Being Installed, Christian Missionary Went To Court With The Ruse That Water Collection Was Being Reduced."

Later on 06.08.2021, a video was published on the official Facebook page of Vishwa Samvada Kendra (VSK) with the caption "Tarpaulin Covered Shiva Now Free! Why Oppose Lake Development?" It is seen from the video that the Shiva statue is now unveiled and saffron flags planted all around it. One Radhakrishna Holla, described in the video as a Social Worker, standing in front of the Shiva idol created on the artificial island, says that two days prior to the recording of the video [i.e. on 04.08.2021], locals had unveiled the Shiva statue which had remained closed for the last two years.

On 06.08.2021, Puneeth Kerehalli published this video on the timeline of his Facebook page and saluted it.

The memo claimed the persons featured in the videos referred to above – Puneeth Kerehalli, Santosh Kartal, Radhakrishna Holla, Lokesh, Ramamurthy, Rajakumar – have committed criminal contempt of court and offences punishable under Sections 153A, 153B, 295A, 295B, 298, 505(2) read with Sections 34 and 149 of the Indian Penal Code, 1860.

The court has directed the state government to file a report of compliance about the action taken by the commissioner of police, as well as action taken of posting requisite police force around the Begur lake. The report has to be submitted by Tuesday (August 17). The matter will be next heard on August 18.