Use Of Name 'Tiranga TV' Without Logo Of Saffron & Green Does Not Violate Flag Code : TDSAT [Read Judgment] 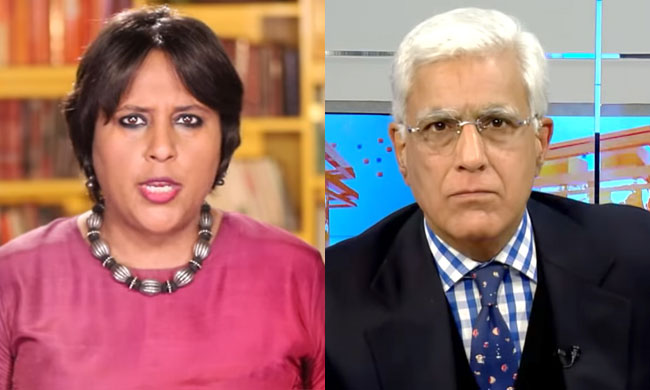 x
The Tribunal overruled the Centre's objection to the channel name.

The Telecom Disputes Settlement and Appellate Tribunal, New Delhi (TDSAT) on Monday allowed Veecon Media and Broadcasting Private Limited (Veecon) to use the name 'Tiranga TV' for its news channel, without the logo having saffron and green colours used in the national flag.The decision taken by the Union Ministry of Information and Broadcasting on March 27 refusing to sanction the name...

The Telecom Disputes Settlement and Appellate Tribunal, New Delhi (TDSAT) on Monday allowed Veecon Media and Broadcasting Private Limited (Veecon) to use the name 'Tiranga TV' for its news channel, without the logo having saffron and green colours used in the national flag.

The decision taken by the Union Ministry of Information and Broadcasting on March 27 refusing to sanction the name 'Tiranga TV' was quashed by the Tribunal.

'Tiranga TV', an English news channel spearheaded by Barkha Dutt and Karan Thapar, had proposed a logo with saffron and green colours initially. The Ministry of Information & Broadcasting (MIB) objected to this by saying that it amounted to colourable imitation of national flag and violated the and Emblem and Names (Prevention of Improper Use ) Act 1950 and Flag Code 2002.

The channel was initially titled  'Harvest TV', which name was used by a south-based evangelical channel run by Harvest TV Network Ltd. Veecon obtained license from Harvest TV Network in 2016 for using the name 'Harvest TV' for two years. After the expiry of license period, Veecon submitted an application for change of name and logo as 'Tiranga TV' before the MIB.

In January 2019, it approached the TDSAT complaining that MIB was sleeping over its application submitted in September 2017. Meanwhile, the channel had to face civil litigation by Harvest TV Network for using 'Harvest TV' name beyond the license period.

The Ministry on February 13 objected to the use of 'Tiranga TV' with the logo having colours of tricolour. On February 14, the TDSAT passed an interim order, allowing Veecon to use the name 'Tiranga TV', without the colours of national flag. Veecon was also directed to submit alternate logos.

Following this, Veecon submitted another logo without the colours of national flag. However, the MIB by its order issued on March 27 stated that the name 'Tiranga TV' was objectionable and directed to run the channel with the name 'HTN News'.

Regarding the objections of Centre, the Tribunal agreed that the use of 'Tiranga TV' with the logo of saffron and green will amount to colourable imitation of national flag. In this regard, it placed reliance on a 2003 decision of Andhra Pradesh High Court in Ravikant Shinde v Managing Director, Gujarat Heavy Chemicals Ltd, which had held that the use of imagery of Dandi march in the logo of a salt was colourable imitation of Mahatma Gandhi, which was prohibited under Emblems and Names Act 1950.

"By applying the tests as applied in the case of Ravikant Shinde(supra) by the Andhra Pradesh High Court, we find that the combination of the word 'Tiranga' and the three colours of the national flag do conjure an image of the National Flag and the similarities created by such a logo can be treated as colourable imitation of the National Flag. Therefore the impugned decision so far as it refuses permission to the petitioner to use its first choice or option cannot be faulted", observed the TDSAT bench headed by former SC judge Justice Shiva Kirti Singh.

However, applying the same principles, the use of name 'Tiranga' with the second option of logo, which has no colours of national flag, will not violate Emblems Act and Flag Code, held the TDSAT. It also took note of the contention of the petitioner that 'Tiranga' was not a name included in the schedule of Emblem Act, which contain the names of national importance which cannot be used for commercial purposes.

"there can be no doubt/hesitation in concluding that the word "Tiranga TV" without the colours of National Indian Flag i.e. Saffron and Green has absolutely no ingredients which in total effect can amount to a colourable imitation of the Indian National Flag", observed the TDSAT, setting aside the March 27 decision of the Centre.