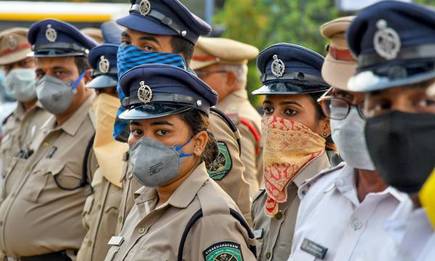 The Bombay High Court while hearing a suo motu public interest litigation taken up for ensuring safety of medica/para-medical staff on Covid-19 duty, observed that the police machinery is under great stress and strain, therefore, State should consider using employees of the revenue department who are currently off-duty, preferably below 50 years, for dealing with activities where police...

The Bombay High Court while hearing a suo motu public interest litigation taken up for ensuring safety of medica/para-medical staff on Covid-19 duty, observed that the police machinery is under great stress and strain, therefore, State should consider using employees of the revenue department who are currently off-duty, preferably below 50 years, for dealing with activities where police presence is not necessary.

Justice RV Ghuge of the Aurangabad bench also noted that time has come for police authorities to book people who hold out threats or abuse or assault medical/paramedical staff now commonly known as corona warriors and take appropriate action against such miscreants.

Court had taken notice of a news report by Dainik Lokmat, Aurangabad Edition dated May 12 in its "Hello Aurangabad Supplement" wherein it was stated that a lady nurse namely Shilpa Hiwale, who is deployed in the District General Hospital and specifically in the Mini Ghati Corona Ward at Chikalthana.

As per the report, some of Shilpa's neighbours knocked on the door of her house in the middle of the night on the pretext that somebody wanted drinking water. After the door was opened, the neighbours entered her house. Her husband and her young son reside in the same house. They were threatened with assault if she did not vacate the said house and leave the said area as the neighbourers feared that she would introduce Coronavirus infection in the colony and has become a threat to the locality.

The news report further states that such threats were held out earlier as well and all the four wheels of their car were deflated more than a week ago. Recently, the car indicator was also broken. The concerned MIDC, Cidco Police Station, has registered a non cognizable offence and is investigating the incident.

Government Pleader DR Kale reiterated that the corona warriors would be given adequate protection and the local administration including the police authorities would do the needful.

On the other hand, Amicus Curiae AR Joshi referred to a chart placed on record by the District Collector, Aurangabad indicating the list of Nivara Gruha/Community Canteens. Joshi expressed concern regarding migrants and displaced workers and submitted a list of cities/camps which house such workers. He submits that there are private entities which also take care and accommodate such displaced persons and he is unsure as to whether the District Collector has a complete record of these migrants.

The chart indicates that only 9542 displaced employees have registered with such community canteens, as on April 16, when they have a capacity of 14293 persons.

GP DR Kale submitted that the said list is dated April 16, many more displaced workmen may have registered themselves in these last 26 days. The local administration is fully occupied and dedicatedly dealing with the containment of Covid-19 Pandemic, he said.

The local administration is exerting day in and day out to deal with the situation and is committed to taking care of such displaced/migrant workers, Kale said. He sought 4 weeks time to present data regarding the total number of such workmen.

Following this, Justice Ghuge noted that a lot of stress is being caused to the police machinery-

"Besides the above, I find it necessary to bring it to the notice of the learned GP that the Police Machinery is under great stress and strain. In its endeavour to control the spread of Covid-19 Pandemic, Police Personnel are deployed on the streets, at railway stations, in various localities and are even deployed for dealing with applications for seeking travelling pass and permissions to migrate.

I am sure that the local administration and the State Government is aware that several revenue officers and employees of the Revenue Department are of duty. The State Government should consider the deployment of such 'off-duty' revenue employees, especially those below the age of 50 years for the purposes of dealing with such activities and issues wherein the Police Personnel need not be necessary."

Court said that for example if migrant workers or displaced students desire to return to their native places and are required to register themselves, the State Government and the local administration can utilize such 'off duty' employees of the revenue department, so as to ease the burden and pressure upon the police department.

Amicus Curiae Joshi added that some of the residents have themselves created blockades in the colonies and internal roads wherever a coronavirus positive patient is noticed. Thus police should initiate steps to remove such unauthorized blockades, Joshi stated.

Directing the State and local administration to resort to legally permissible effective measures for implementing the lock down restrictions, the Court scheduled June 12, 2020 as the next date of hearing.