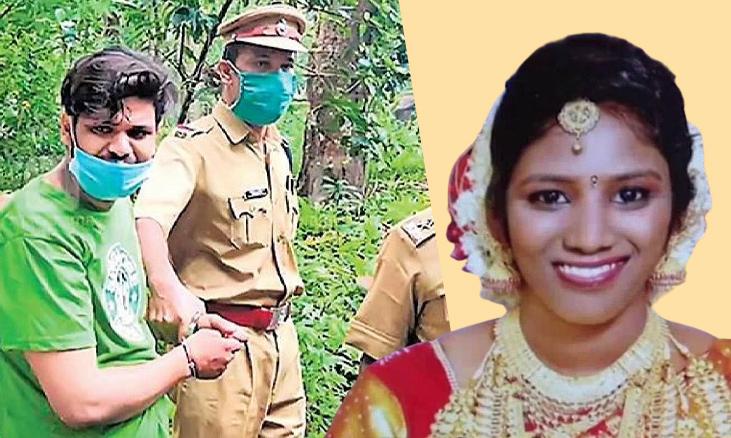 In the Uthra murder case, a Kerala court on Wednesday sentenced Sooraj S Kumar to double life imprisonment and a five lakh fine for murdering his wife by inducing a homicidal snakebite. He was also awarded 10 years and 7 years of imprisonment in two other cases for causing hurt by means of poison and destroying evidence.

The sentencing will have to run consecutively.

The Kollam Additional District and Sessions Court, presided by Additional Sessions Judge Manoj M, pronounced its judgment in first of its kind murder where the husband threw a starving cobra on his wife while she was asleep to induce her death by snakebite. This is reportedly the first case in the State where a live animal was used for murder.

Advocate G. Mohanraj led the prosecution in the case and had urged for a death sentence to be awarded to the accused arguing that it fulfilled the criteria of being the rarest of rare cases. He further asserted that such a sentence was in the public interest considering the gravity of the offence and that he had never sought a death sentence before for any case during his service.

It is pertinent to note that this is the very first case in the entire country where a man has been found guilty of murder using a snake. Although two similar cases have been reported in the past, both the cases resulted in the acquittal of the accused as their guilt could not be established.

However, in the instant case, the Police had successfully cracked the case using a dummy reptile and recreating the entire crime scene. The Special Public Prosecutor had also recorded his appreciation for the efforts of the Kerala Police in deciphering the murder.

In a crime that numbed the State, Uthra, a 25-year-old homemaker, was found dead at her home from a snakebite on 7th May 2020. Although initially, attempts were made to dismiss it as a natural snakebite, her family suspected foul play in her death.

The skepticism arose from the fact that the deceased has been repeatedly subjected to harassment from her husband and his family for dowry. They argued that it was impossible for a snake to find its way into a closed air-conditioned room, particularly since the floor was tiled.

Her family further alleged that the murder was carried out to acquire gold and property.

These suspicions were fortified by the fact that less than nine weeks before the incident, Uthra sustained another near-fatal attack from a viper. She was recovering from the same when her life was claimed by the second snakebite. Although the neighbours attempted to trivialise the entire narrative as the family being haunted by the wrath of the snake, her parents stood their ground and demanded an investigation.

Accordingly, a police investigation followed, and the 1000 paged charge sheet unraveled the elaborate conspiracy planned and implemented by her husband, the accused herein.

The accused was consequently arrested with another man who helped him procure both the snakes. The handler later turned approver and disclosed that both the snakes were sold for Rs. 10,000 together and that he did not know the purpose behind the purchase.

The accused thereafter confessed to his crime during interrogation and admitted that he had stored two snakes in a jar without feeding them with the intention of killing his wife.

Later on, his father, mother and sister were also arrested after recovering around 38 sovereigns of Uthra's gold that was found buried in a rubber estate behind their residence.