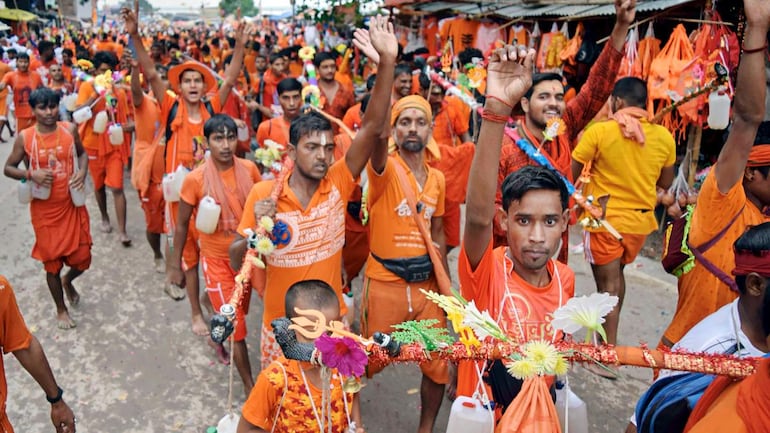 This comes a day after the Supreme Court said in categorical terms that the State of Uttar Pradesh cannot go ahead with its decision to allow the Kanwar Yatra in the State amid the COVID-19 pandemic.

A bench headed by Justice RF Nariman asked the State of Uttar Pradesh to reconsider its decision to allow physical yatras and get back to the Court on Monday.

"Either we will pass orders directly, or will give you one more opportunity to reconsider your decision", Justice Nariman orally told Senior Advocate CS Vaidyanathan, who was appearing for the State of Uttar Pradesh.

A bench comprising Justice RF Nariman and BR Gavai was hearing the suo moto case taken on the decision of the Uttar Pradesh Government to allow Kanwar Yatra amid the COVID pandemic.

When the matter was taken, Solicitor General for India Tushar Mehta told the bench that the stand of the Union of India is that the yatra should not be allowed.

"Mr Vaidyanathan, there is one thing. Either we pass the orders directly or give you one more opportunity to reconsider holding yatra physically. The pandemic affects all of us. We are all citizens of India. This suo moto case is taken because Article 21 applies to all of us. It is to safeguard all of us".

On this, Vaidyanathan had agreed to get instructions from the state government on revisiting the decision to allow the physical yatra by Monday, July 19.

The order dictated by the bench after this exchange stated as follows :

"This court pointed out given the Covid pandemic and the fear that looms over all the citizens of India of a third wave hitting us, whether the authorities would be in a position to reconsider the holding or allowing of physical yatra at all. We are of prima facie view that it concerns all of us as citizens of India and is at the heart of the fundamental right to life. The health of citizenry of India and right to life is paramount, all other sentiments whether be religious is subservient to this basic fundamental right".

The Court had also observed that the Religious sentiments are subservient to the fundamental right to life and health, observed the Supreme Court today in the suo motu case taken against the decision of the Uttar Pradesh government to allow the Kanwar Yatra pilgrimage amid the COVID-19 pandemic.

The bench also recorded that the State of Uttarakhand had cancelled the Kanwar yatra.

"Amid fears of a possible third wave of Covid-19, the Uttarakhand government has suspended the kanwaryatra even as neighbouring Uttar Pradesh is pressing ahead with the annual ritual that sees a heavy movement of pilgrims across states in the northern belt".