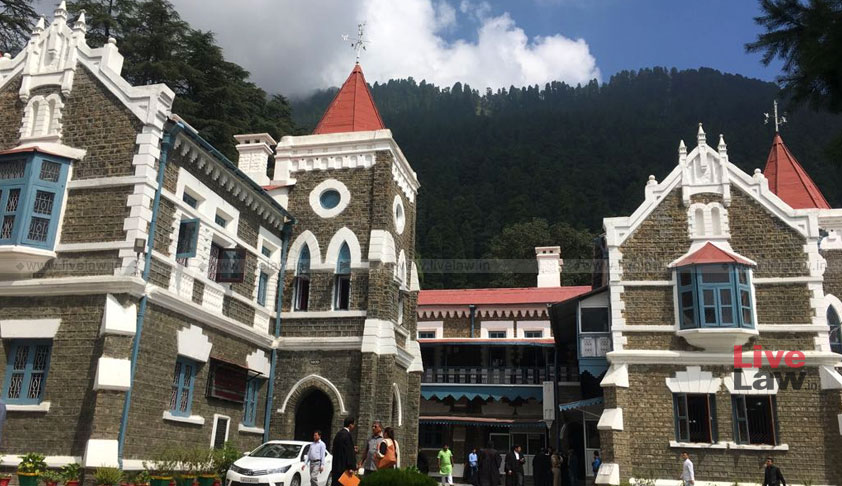 The Uttarakhand High Court, by Order of Hon'ble the Acting Chief Justice, has issued an Office Memorandum informing that Neeraj Kumar, Chief Judicial Magistrate, Uttarkashi, against whom, a disciplinary proceeding is contemplated, has been put under suspension with immediate effect.The Memorandum states that the employees of Collectorate/residents of Collectorate Colony at Uttarkashi,...

The Uttarakhand High Court, by Order of Hon'ble the Acting Chief Justice, has issued an Office Memorandum informing that Neeraj Kumar, Chief Judicial Magistrate, Uttarkashi, against whom, a disciplinary proceeding is contemplated, has been put under suspension with immediate effect.

The Memorandum further clarifies that with regard to the following charges, Uttarkashi CJM has been put under suspension:

· That in course of ragging, Sri Neeraj Kumar damaged the official vehicles of Sub-Divisional Magistrate, Dunda and Tehsildar Bhatwari and broke glasses of vehicles.

· That due to aforementioned conduct of Sri Neeraj Kumar, there was a lot of fury and fear in the families residing nearby.

· That in the night of 29.10.2020, Sri Neeraj Kumar beat his family members while he was intoxicated and abused them. Sri Neeraj Kumar came outside his house and when his son requested him to return to home, he used rough language with his son and people nearby.

· That Sri Neeraj Kumar attempted to ply official vehicle allotted to him while in inebriated condition and while doing so, placed the vehicle in the middle of the road and honked the hooter continuously.

· That later on Sri Neeraj Kumar plied the official vehicle allotted to him to the parking of the colony and damaged other government vehicles parked there.

· That in the said incident vehicle no. UK-l0G.A.-0112 of SubDivisional Magistrate, Dunda and UK-·l0-0023 of 'rehsuoar, Bhatwari has been damaged.

The Memorandum further states that the aforesaid conduct of Sri Neeraj Kumar is in violation of Rule 3(1), 3(2), 4-A (d) and Rule 27 of the Uttarakhand Government Servants' Conduct Rules, 2002 and amounts to misconduct.

It has been clarified that Neeraj Kumar, Chief Judicial Magistrate, during the period of his suspension, will get half of his salary payable on the date of suspension as subsistence allowances along with dearness allowance, in accordance with provisions of subsidiary rule 53 of F.H.B. Part-2 to 4 and Government Orders issued in this behalf from time to time.

Notably, during the period of suspension and until further orders, Neeraj Kumar shall remain attached with the District Judgeship's headquarter Bageshwar.

He has been directed to not leave the station without obtaining the prior permission of the Hon'ble Court.

Notably, accepting the full bench resolution of the Uttarakhand High Court and on the recommendation of the State Government, the Uttarakhand government has recently dismissed a Civil Judge from service for allegedly torturing a minor girl (13-year-old) who worked as a domestic help at her residence in Haridwar, Uttarakhand.

It may be noted that recently the Patna High Court had issued an order informing that it has placed 4 Judicial Officers under suspension as disciplinary proceeding against them are pending.