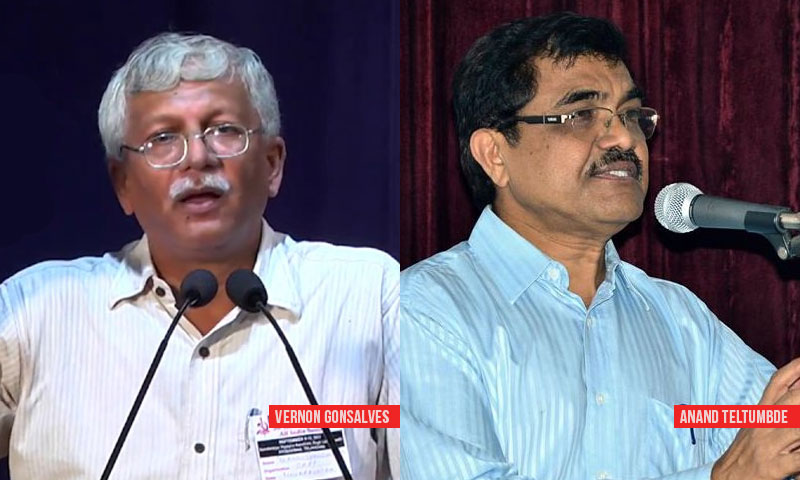 Vernon Gonsalves and Anand Teltumbde, both accused in the Bhima Koregaon case and lodged at Taloja jail, have filed a writ petition before the Bombay High Court on Friday seeking directions to the State to be tested for Covid-19 as they came in close contact with co-accused Varavara Rao who was admitted to the Hospital after testing positive for the virus.

"An inmate at the prison, with whom the Petitioners were in close contact with has tested positive and thus there is an urgent need to conduct swab tests for the Petitioners and make arrangements for them accordingly" the petition states.

The 61-year-old Vernon was tasked by the prison authorities to take care of the 81-year-old Rao who was unable to walk, go to the toilet or brush his teeth on his own. Rao is currently undergoing treatment at St.George's hospital in Mumbai, after initially being taken to JJ Hospital which is a non-Covid hospital. But he was shifted to JJ Hospital last month as well for after fainting, after being discharged, Rao was taken to the jail hospital where the 68-year-old Teltumbde was lodged to assist Rao and was in continuous physical contact with him.

The petitioner accused have also contended that they both have o-omorbidities and are at a high risk of contracting Covid-19. While Vernon Gonsalves suffers from hypertension, Anand Teltumbde has a host of chronic problems, like chronic bronchitis asthma, chronic cervical spondylitis, supraspinatus tendinosis and postromegaly.

Petitioners have also warned since they are at a high risk of contracting Covid-19, they pose a risk to the other inmates as well. The petition contends-

"Keeping the petitioners, who are at a high risk of contracting Covid-19 and posing a risk without sufficient cause, is grave and absolute violation of their rights under articles 4, 19 and 21 of the Constitution of India, 1950."

Moreover, the petitioners have also sought directions to be kept in isolation at the jail hospital where physical distancing is possible.

Apart from the petitioners and Varavara Rao, other accused in the case Surendra Gadling, Mahesh Raut, Rona Wilson, Arun Ferreira and Sudhir Dhawale are all lodged at Taloja prison. Whereas, Sudha Bharadwaj and Shoma Sen are kept at Byculla. Gautam Navlakha is actually being kept at a quarantine facility in Taloja after he was brought back from Delhi.