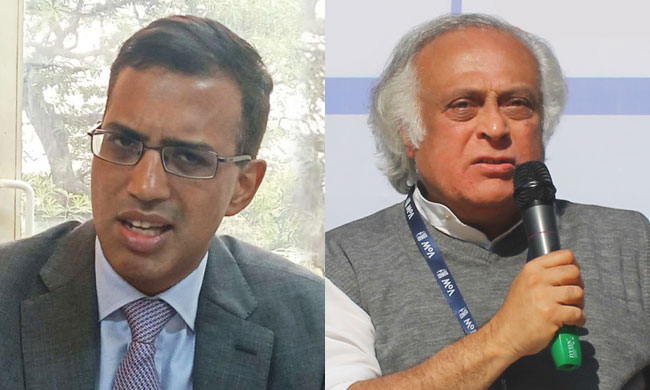 Vivek Doval was cross-examined before Additional Chief Metropolitan Magistrate Samar Vishal in a criminal defamation case he has filed against Jairam Ramesh and Kaushal Shroff, a former Union Minister and a Caravan journalist respectively. The cross was conducted by Senior Advocate Salman Khurshid who is representing Jairam Ramesh, and Mr Bhavook Chauhan who is the counsel for...

Vivek Doval was cross-examined before Additional Chief Metropolitan Magistrate Samar Vishal in a criminal defamation case he has filed against Jairam Ramesh and Kaushal Shroff, a former Union Minister and a Caravan journalist respectively. The cross was conducted by Senior Advocate Salman Khurshid who is representing Jairam Ramesh, and Mr Bhavook Chauhan who is the counsel for Kaushal Shroff.

The first half of the cross-examination was conducted by Senior Advocate Salman Khurshid who wanted the court to consider the following factors:

1. There's no previous enmity between Mr Ramesh and Mr Doval as well as his family. Therefore, there was no intention to hurt his reputation.

4. The statements of Mr Ramesh were made in the heat of the moment and under a political climate. Therefore, it lacked any criminal intent to constitute defamation. For instance, the word 'kaand', is used in Ramcharitmanas to refer to episodes

5. The allegations have been put to politicise the matter and gain media coverage from it

6. GNY Fund was already plummeting and the impugned press conference and the statements made therein had no role to play in the economic demise of the said fund

Mr Doval, on the other hand, did attribute the statements made by Mr Ramesh as a substantial reason behind his investors losing confidence in him and his fund. He also mentioned that his partner has orally asked him to step down. He went on to submit his academic and professional documents to establish his professional reputation in India. He also urged that the words used by Mr Ramesh, for instance the Hindi word 'kaand', has to be seen in the contemporary parlance.

When asked about the already declining fortunes of his fund, Mr Doval answered by saying that every startup fund faces operational issues. However, the decline in investor confidence was influenced by the statements of Mr Ramesh and the subsequent media coverage that it had received. 'political speech cannot be an exception to defamation of private professionals', he answered. He said that political speeches cannot impair careers, and it is evident, that such statements were made to target his father who was the NSA at that time.

When he was asked the show exact words that he deemed defamatory, Mr Doval pointed out exact paragraphs from the press conference that insinuated that he routed RS 8300 crores worth of funds through GNY Asia during the demonetization period. He answered that such statements weakened the appetite of the investors which further plummeted his professional reputation.

Later on, the cross-examination was conducted by Adv.Bhavook Chauhan who was appearing in behalf of the Caravan journalist, Kaushal Shroff. The questions raised therein were related to the facts mentioned in the Caravan report about GNY Asia operating out of the Cayman Islands. When asked about the fact that the Cayman Islands does not levy any corporate tax, Mr Doval simply denied any knowledge of such fact. He was also asked questions about his involvement with PwC and certain facts mentioned about his in a Bloomberg article. He denied all the facts mentioned in the aforementioned article.

The cross-examination will continue tomorrow as well.