How A Footballer Turned Lawyer Created A Graphic Novel For Legal Awareness? 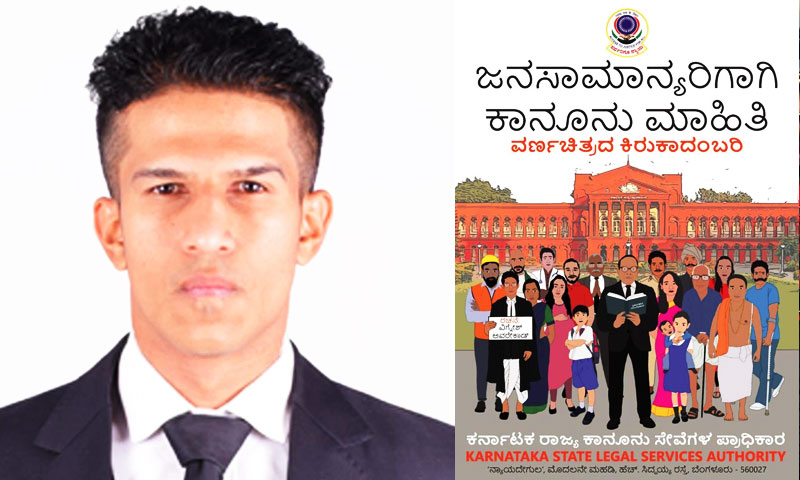 For 24-year-old football coach and legal consultant, Vignesh Avarekad, an unfortunate break from his football career nudged him into unknown territories, wherein he endeavored to reach the masses in his own special way – with a brightly coloured graphic novel. "Janasamanya Kanoonu Mahiti – Varnachitrada Kirukadambari" is a "gonzo" graphic novel, published by the Karnataka...

For 24-year-old football coach and legal consultant, Vignesh Avarekad, an unfortunate break from his football career nudged him into unknown territories, wherein he endeavored to reach the masses in his own special way – with a brightly coloured graphic novel.

"Janasamanya Kanoonu Mahiti – Varnachitrada Kirukadambari" is a "gonzo" graphic novel, published by the Karnataka State Legal Services Authority (KSLSA) to increase legal awareness and literacy in the state. With beautifully illustrated colourful graphics, this 92-page Kannada novel is the successful attempt of Avarekad to simplify the complicated legal jargon that sadly renders law inaccessible to the common man.

A former professional youth footballer who played for the Bengaluru FC Under 19s between 2013 and 2015, for Avarekad, a tryst with the menace of age fraud in elite youth sports in India called upon his conscience to take up legal studies. He soon enrolled into the BBA LL.B programme at Christ University as it was the only law college that allowed him to pursue football and find a legal solution to the menace simultaneously.

Unfortunately, an injury in 2012, put an abrupt end to his dream of pursuing football professionally at a higher level. However, this setback has not robbed Avarekad of his zeal to make something of himself and consequently make a change in the country.

"I have been diagnosed with a chronic compartmental syndrome which prematurely ended my career in football. The pain and agony gave birth to a poet and artist in me. Having penned a working research paper on the topic of age fraud in elite youth sports in India, I am determined that the battle against the menace is a cultural one and I am working towards eradicating the menace."

THE START OF SOMETHING NEW

Avarekad gave birth to this brainchild during his law school journey which was peppered with enriching experiences as he was a member of the Legal Aid and Awareness Committee of his college. He would participate in legal aid camps organized in underdeveloped villages around Bengaluru.

One of the activities that was undertaken at the camp was the distribution of a handbook to villagers, meant to breakdown laws for easier comprehension of the same.

"We would distribute copies of a book published by the Karnataka State Legal Services Authority titled 'Janasamyarige Kanoonu Mahithi' - a textual overlay of widely applicable laws in the state of Karnataka. However, the rural people who I spoke to revealed to me that these books were laden with too much text attracting little interest from them."

During these camps, Avarekad would also participate as an actor and a director in street plays meant to educate villagers about the laws applicable to them. It was while conducting one such play which led to an epiphany that such a medium of communication was not only captivating the villagers' interest, but was also entertaining them at the same time.

"The effectiveness of this form of communication however was limited in the size of its audience. Realising that the representation of these skits in a tangible format would enlarge the size of the audience, I undertook an unrelenting pursuit of creative excellence. Utilising my skills in illustration, I began to create digital depictions of the skits I acted in and directed –the end result has been this graphic novel."

WHAT DOES AVAREKAD WISH TO ACHIEVE WITH THIS GRAPHIC NOVEL?

From a scene depicting a symbolic car journey being taken up by Avarekad with Dr. B.R. Ambedkar, father of the Indian Constitution, who explains the intricacies of Lok Adalats to disgruntled workers to, Avarekad's personal favourite, a chapter on senior citizens, meant to elaborate on the Maintenance and Welfare of Parents and Senior Citizens Act, 2007, which features all of his grandparents (3 of whom are now no more), the aim and objective behind the creation of the novel is very noble.

"India is a country that is replete with social disparities – one of which is the skewed access to justice. One of the foundational pillars of access to justice is legal literacy. Unfortunately, endeavours to spread awareness regarding the rights available to the populace and the laws governing them have been limited. This graphic novel is my first contribution in my mission to bridge this information gap."

Elaborating on his duty as an artist, Avarekad wishes to represent legalese in colour in order to spread basic legal awareness.

"I seek to develop more such work in paper and digital to educate the populace about the laws and their rights. I hope to branch out to educate the urban populace in the near future as well. The possibility of making legal education more fun and creative remains a potential goal as well."

Avarekad recounts an incident which further fueled his enthusiasm to make a difference with his art.

"Before it got released by the KSLSA, I had given 3 copies to students of a school in my last legal aid camp in my final year of law school. The excitement in their eyes to see colours in a book about law was deeply satisfying. Given my experience with the kids within the legal aid camps in the rural areas, it can be hugely beneficial to the kids who can take it home and teach their illiterate parents as well."

Avarekad's novel is unique in the sense that almost all the characters are people from his life; from his grandparents to students belonging to the Legal Aid and Awareness Committee of his law school. There also exists a personal touch in the novel; for instance, the fictional scene which depicts his interaction with Dr. Ambedkar during a car journey.

"The car is a premier Padmini, which is a car I absolutely adore and it also symbolically represents the beginning of my journey with the profession of law. Who better than Dr. Ambedkar to accompany me on this philosophical drive?"

The novel also follows the "Gonzo" genre. Avarekad explains that, "Gonzo is a style of expression that has its roots in American Journalist Hunter S Thompson - who used to follow a journalistic reporting style wherein he placed himself in the stories that he reported; very similar to Frida Kahlo's style of expression wherein the artist uses the self to explore societal woes and concerns."

Avarekad says that as a cartoonist, he follows this style because he seeks to reflect on societal conundrums, fallacies, ironies and personal sentiments common to a large audience by expressing it through varied self-depictions.

Additionally, Avarekad has also been asked by the KSLSA to add POCSO Act and environmental laws. He has also sought permission for the book to be published under the aegis of other organisations in order to increase the circulation. However, Avarekad's vision for creating legal awareness does not end there.

"Having assigned the copyright of the work to the KSLSA only in the Kannada language, I hope for the work to be published in other languages and particularly Hindi so it may reach a larger audience. I appeal to anyone working in the field to lend their assistance to achieve the same."