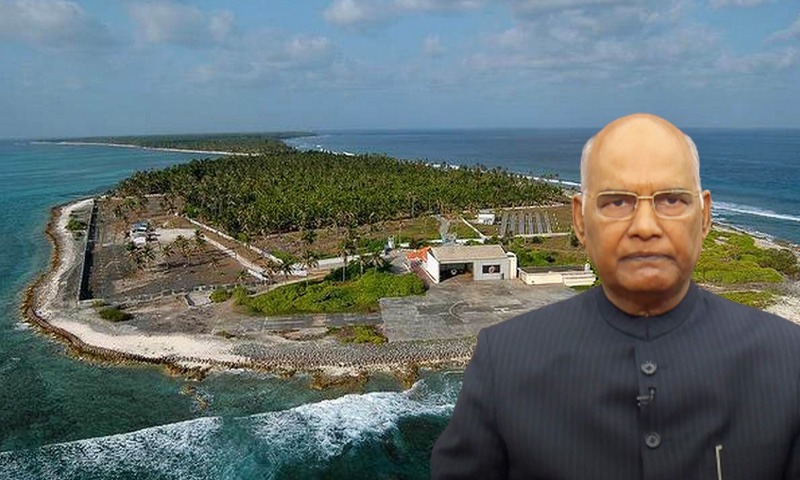 A collective of 58 lawyers and researchers have approached President Ram Nath Kovind with the request to withdraw the draft Lakshadweep Development Authority Regulation 2021 (LDAR) in the interest and well-being of the UT citizens. The letter reads,"The draft LDAR is disassociated from the social, cultural, economic and environmental realities of the Lakshadweep islands. We find that the...

A collective of 58 lawyers and researchers have approached President Ram Nath Kovind with the request to withdraw the draft Lakshadweep Development Authority Regulation 2021 (LDAR) in the interest and well-being of the UT citizens. The letter reads,

"The draft LDAR is disassociated from the social, cultural, economic and environmental realities of the Lakshadweep islands. We find that the draft LDAR not only fails to address its stated purposes of good governance, the conservation and promotion of public health, safety and general welfare of the people but rather goes against these and will facilitate land grab and ecological destruction on these special islands."

The letter puts forth a three-point list of concerns arising from the draft LDAR: (a) violation of a fundamental rights guaranteed under Article 14 & 21 of the Constitution and principles of natural justice; (b) ignorance to customary laws of the island and violation of recommendations of the Parliamentary Standing Committee (Report no 231); (c) overriding the Integrated Island Management Plans (IIMPs) prepared under orders of the Supreme Court & recommendations of the Justice Raveendran Commission.

The draft LDAR 2021 is a proposed regulation to provide for the development of towns in Lakshadweep, enacted under Article 240 of the Constitution of India. Under Article 240, the President has the power to make regulations for the peace, progress, and good government of the Union territory of Lakshadweep.

The letter emphasizes that the livelihood of islanders is directly dependent on the health of the lagoon and reef ecosystems. It mentions that the land acquisitions provisions proposed by the draft LDAR go against the spirit of fairness, transparency and livelihood rehabilitation mandated as per the Right to Fair Compensation and Transparency in Land Acquisition, Rehabilitation and Resettlement Act, 2013. It further notes that the provisions in the draft are also in contravention of legal principles of reasonableness and non-arbitrariness.

The letter also questions restriction of local community participation by superseding the powers of the Lakshadweep panchayats and creating a separate planning authority. The letter further reads,

"The draft LDAR further centralises control over the ownership and use of land in Lakshadweep, ignoring the customary laws and legal pluralism that shape the governance of land in the islands. Additionally, the draft LDAR 2021 prima facie violates recommendations of the Parliamentary Standing Committee (Report no 231 presented on 15.03.2021) by not consulting the elected representatives or the Member of Parliament from Lakshadweep in matters of planning and development."

The letter refers to report of Justice RV Raveendran Committee established by order of the Supreme Court in the case of Union Territory of Lakshadweep & Ors v. Seashells Beach Resort & Ors. In this case, the Court had accepted the Committee recommendations and had further directed the Government of India and UT of Lakshadweep to add these to the Integrated Island Management Plan (IIMP). The letter states that the draft LADR 2021 ignores and overrides the IIMPs prepared under orders of the Supreme Court.

The collective has requested the President of India to ensure the implementation of the recommendations of the Supreme Court-appointed Justice Raveendran Committee for the sustainable development of the islands.

"As a collective of researchers and lawyers working to secure livelihood security and sustainable development for India's communities, we respectfully request you to intervene to ask for the withdrawal of this draft law, through your constitutional powers and duties to ensure peace, progress and good governance for Lakshadweep", the letter concludes.

Recently, the Kerala High Court dismissed a PIL challenging the Draft Lakshadweep Development Authority Regulation 2021 (LDAR) observing that they were still under active consideration by the Administrator, and hence the examination of their legality is completely premature. The plea averred that LDAR gives the respondent powers to remove or usurp the small holdings of property owned by the islanders belonging to the Scheduled Tribes.