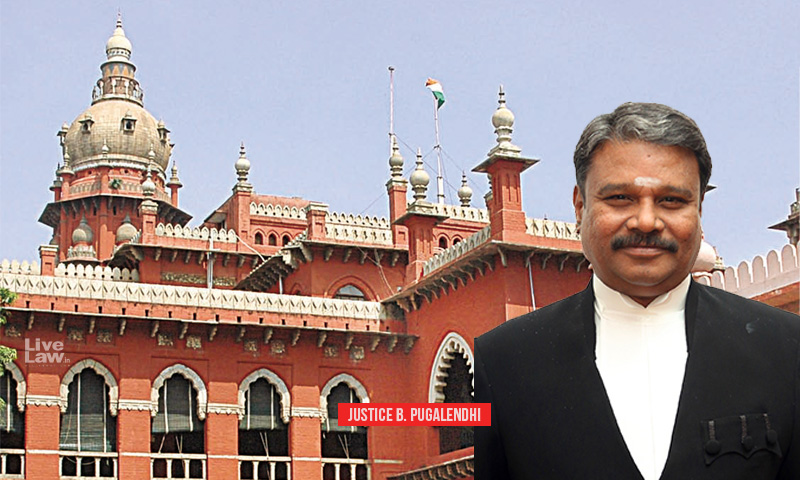 "Withdrawing from a case merely on a party's request allows the parties to cherry-pick a bench of their choice", observed Justice B. Pugalendhi of the Madras High Court on Thursday.Hearing appeals against acquittal of the management of certain granite firms (in connection with their accusation for illegal quarrying of granite in Madurai worth crores of rupees), the Single Bench noted that if...

"Withdrawing from a case merely on a party's request allows the parties to cherry-pick a bench of their choice", observed Justice B. Pugalendhi of the Madras High Court on Thursday.

Hearing appeals against acquittal of the management of certain granite firms (in connection with their accusation for illegal quarrying of granite in Madurai worth crores of rupees), the Single Bench noted that if the Judge were to entertain the plea of the respondents-accused, such an act, in the minds of this Court, is a breach of the solemn responsibility vested upon this Court by the Constitution, apart from deviating the roster allotted by the Chief Justice of Madras High Court as well as the Administrative order of the Administrative Judge of the Madurai Bench of Madras High Court.

In turning down the request for recusal, the Single bench placed heavy reliance on the recent instances where Supreme Court judges have come down heavily on similar attempts by parties before them: the then-Chief Justice Ranjan Gogoi in a PIL regarding the plight of inmates in Assam's detention centres (2019); in the Judge Loya case, when the petitioners sought the recusal of Justices A.M. Khanwilkar and Justice D.Y. Chandrachud from the Bench, stating that they both hailed from the Bombay High Court; and, in the Land Acquisition case, where Justice Arun Mishra was asked to recuse for having dealt with the matter earlier (2019).

The Counsel appearing for the respondents had informed the Single Judge of instructions from his clients M/s.PRP Exports and PRP Granites that Justice Pugalendhi "has already appeared in several cases as against my client in the capacity as Special Government Pleader and as Additional Advocate General on various dates and also appeared as Counsel for Mr.Anshul Mishra (one of the petitioner-complainants before the Court), the then Madurai District Collector, during the period 28.05.2012 to 07.07.2013".

Cases, wherein the Single Judge had appeared on behalf of Police as well as the Madurai District Authority were enumerated and it was shown to include criminal and writ cases.

"This Court, as a Special Government Pleader and as an Additional Advocate General, has appeared before the Hon'ble Supreme Court as well as this Court in certain writ petitions pertaining to Granite related issues", conceded the bench, adding in the same breath that he had "neither appeared in these petitions nor appeared in any criminal appeals pending before the Court in connection with these respondents / accused".

"This Court fails to understand the merit in this plea. An Additional Advocate General or a Special Government Pleader means an Advocate appointed by the Government to conduct such case, as may be entrusted to him, for and on behalf of the State in the Courts. The Government, based on merit and other things, hires some Advocates, as Law Officers to represent them before various Courts of law, for which, personal motive cannot be attributed to such Advocates", said the bench.

"As per Article 219 of the Constitution of India, every person appointed to be a Judge of a High Court shall, before he enters upon his office, make and subscribe before the Governor of the State, or some person appointed in that behalf by him, an oath or affirmation, according to the form set out for the purpose in the Third Schedule. Accordingly, at the time of swearing-in as Judges of this Chartered Institution, we have solemnly affirmed that we will bear true faith and allegiance to the Constitution of India as by law established, that we will uphold the sovereignty and integrity of India, that we will duly and faithfully and to the best of our ability, knowledge and judgment, perform the duties of our office without fear or favour, affection or ill-will and that we will uphold the Constitution and the laws", asserted the bench.

"Mere because this Court has represented several Government Bodies, as Government Counsel, that by itself cannot be a bar for this Court from taking up any case filed by the Government or against the Government", stated the Single bench, reiterating that no counsel ever steps into the shoes of the client, being the government in this case.

"This Court has not even started hearing the merits of the matter, but, has simply adjourned the matter to today to fix a date for hearing. Even before commencing the arguments, such a plea has been raised, not once, but twice", the Single judge expressed regret.

The bench also took note of an order passed by it in December, 2019 on a Criminal Original Petition in a connected matter, apparently requiring the matter to be placed before another bench. "But, there is no reason assigned in that order and it is very difficult to recollect under what circumstances this Court has passed the order to post the case before some other Court", observed Justice Pugalendhi on Thursday.

The bench added that "just because this Court has passed such an order on an earlier occasion in another proceedings, that by itself cannot be a ground to make out such a plea in all the cases and as observed by the Hon'ble Supreme Court, it would be a wanton attack and it would be an abdication of duty".

The Single Bench proclaimed that the parties approaching the Courts are filing petitions based on the legal principles and the Courts are deciding the issue on the principles of law and "this Court cannot shy away from it's duty on the whims of certain parties".

The Single Judge expressed his displeasure at the conduct of the counsel for the respondents-accused in reiterating his plea for a direction to number his application under Section 309 Cr.P.C. (for postponement/adjournment of hearing), that was filed just a day before. "When the contents of the application filed in the said petition were asked for, the learned Counsel, instead of referring the same, has reiterated the very same stand", observed the bench, continuing to hold that "in the absence of any such compelling reasonings being put forth in the open Court, this Court is not inclined to direct the Registry to number any petition and it is left open to the Registry to number the petition, if it is in accordance with law".

"A plea for recusal was raised consequently, by the same party, but by a different Counsel", writes the Judge, citing that when the earlier Counsel had raised the plea for recusal, this Court had rejected the same and posted the matters on Thursday for fixing a date for hearing, and now, a different set of Counsel has entered appearance and are making the very same plea.

"Though such a conduct warrants some observations, this Court refrains from doing so", said Justice Pugalendhi.

Nevertheless, by way of a parting note, the bench quoted certain choice observations of the Full Bench of the Madras High Court in another case: "It is not the duty of a legal practitioner blindly to follow every instruction of his client...He has not only got a duty towards his client but he has got a duty towards the Court...To attempt to obtain adjournments by misrepresentations and to put forward a purpose which the legal practitioner knows will never be carried out is to attempt to gain, and to gain an advantage, by a trick and a very dishonest one too"