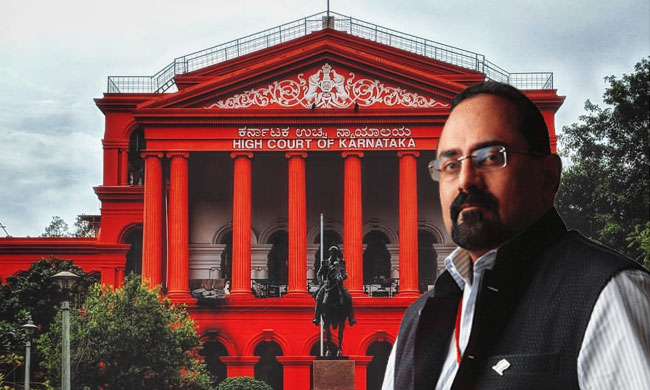 The Karnataka High Court has quashed the proceedings initiated under the Working Journalists and Other Newspaper Employees (Conditions of Service) And Miscellaneous Provisions Act, 1955, against Union Minister Rajeev Chandrasekhar.

Justice V Srishananda sitting at Kalaburagi bench quashed the proceedings initiated under section 18 of the Act. The allegation against Chandrasekhar was that as Director of Kannada Prabha Publications Limited, he had violated the provisions of the Act.

The private complaint was lodged by Labour Inspector Kalaburagi on January 3, 2017, with regard to the alleged violations of the year 2016. The Magistrate had cognizance and issued the summons vide its order dated January 4, 2017.

Chandrasekhar, seeking quashing of the proceedings, argued that he was the director of Kannada Prabha Publications Limited which is in the business of publishing daily newspapers but retired from the directorship by filing an application on 04.04.2013. Contending that he cannot be held responsible for any violation that is said to have been made by the Kannada Prabha Publications Limited, it was submitted that summoning him to face criminal prosecution is uncalled for.

The bench noted that Form-32 filed by Chandrasekhar with the Registrar of Companies states that he has resigned from the directorship with effect from 04.04.2013.

“If that were to be so, the violation of provisions of the said Act by the Company said to have occurred in the year 2016, the petitioner shall not be responsible for the same. However, the said aspect of the matter was not brought to the notice of the learned Magistrate, before he issued the summons," it said.

The court added that it was the duty of the complainant, who is the Labour Officer, to verify whether Chandrasekhar continued to be the director of Kannada Prabha Publications Limited as on the date of alleged violation or not.

Observing that the complaint does not mention that Chandrasekhar was the director even on the date of alleged offence in the year 2016, the bench said: “The continuation of criminal proceedings as against the petitioner would only result in futile exercise and totally uncalled for and result in affecting the rights of the petitioner.”