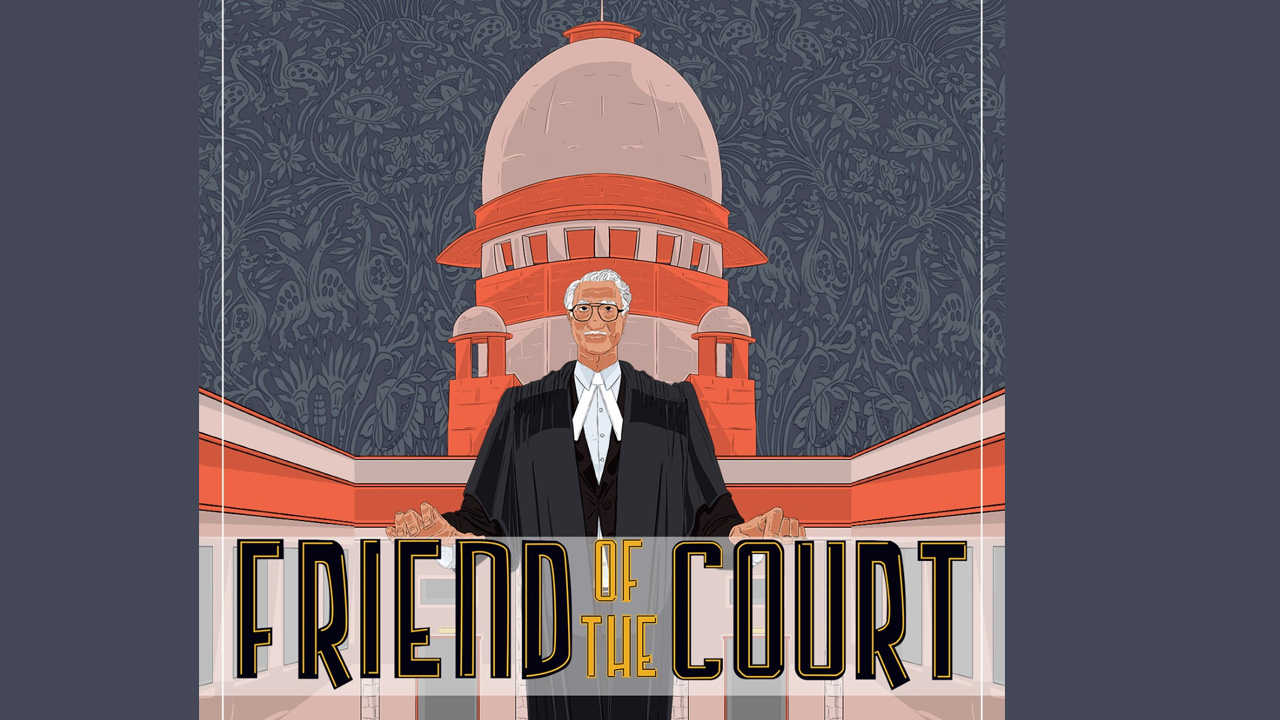 The Friend of the Court is a podcast series from the Anil Divan Foundation in collaboration with the School of Law, Governance and Citizenship at Ambedkar University Delhi. The Anil Divan Foundation was established in 2018 to support legal education and research in India. The podcast is its flagship research project through which it aims to narrate important constitutional stories in an engaging manner for a lay listener.

The podcast has been launched on 31st October 2022. Over eight episodes, the series forensically reconstructs three major cases that senior advocate and constitutional expert, Anil Divan argued: Jain Hawala Diaries, the Cauvery River Water Dispute and the National Judicial Appointments Commission cases. For the first time, these courtroom sagas have been pieced together in a narrative podcast, drawing on documents, news clips and fresh interviews with those who were involved in these battles. It uses Divan's work as a jumping off point to understand how legal battles are shaped and the legacies they leave.

The show opens with the Jain Hawala Diaries case. The three episodes about this case follow a terror funding investigation that eventually led the CBI to a massive Hawala racket with links to leading political and government figures in the 1990s. The episodes deal with the political tumult, the news exposes, and the court case that followed, including the dramatic chargesheeting of LK Advani and other prominent politicians. They examine the genesis of court-monitored probes, the failings of the CBI, the implication of India's top political class in some very serious offences and the ultimate impact of the case.

The Cauvery River Water Dispute episodes go all the way back to the 19th century, and the historic imbalances of the tussle between Karnataka and Tamil Nadu. Tracing a path from there, until 2018, the episodes track the socio-political headwinds, the periodic outbreaks of violence, and the evidence presented by each side for their claims on the river. We eventually see how a quasi-judicial body was unable to satisfy the states, and how the matter reached the Supreme Court, in the process reinterpreting the Constitution and paving the way for legal solutions for subsequent inter-state water disputes.

And finally, the three NJAC episodes tell the story of how India established a process for appointing judges, and how that process has evolved over the years. The episodes delve into the early years of the republic, the Indira Gandhi years, the evolution of the collegium system, and finally, the more recent challenge to the National Judicial Appointments Commission Act, 2014.

The show has been meticulously scripted by a team of researchers and writers who were advised by academics at Ambedkar University Delhi and members of the Foundation. The idea behind the show is to look at what happened in court, as well as go beyond that to explore the dynamic people and forces that shaped these cases. Between them, they tell important stories of government accountability, federalism and judicial independence. Multiple lawyers, constitutional experts, journalists and other personalities were interviewed, and feature on the podcast. These include Abhinav Chandrachud, Alok Prasanna Kumar, Prof. Arun Kumar, Dushyant Dave, Prashant Bhushan, Kapil Sibal, Kamini Jaiswal, Retd Justice Mukul Mudgal, AS Panneerselvan, Sanjay Kapoor, Santosh Paul, Sugata Srinivasaraju, Vineet Narain and a host of others. The series is being hosted by award-winning journalist and writer, Raghu Karnad.

The first episode is out now and further episodes will be released weekly, every Monday. The series will be available on Spotify, Apple Podcasts, Google Podcasts, Jio Saavn, Gaana and all other major platforms.