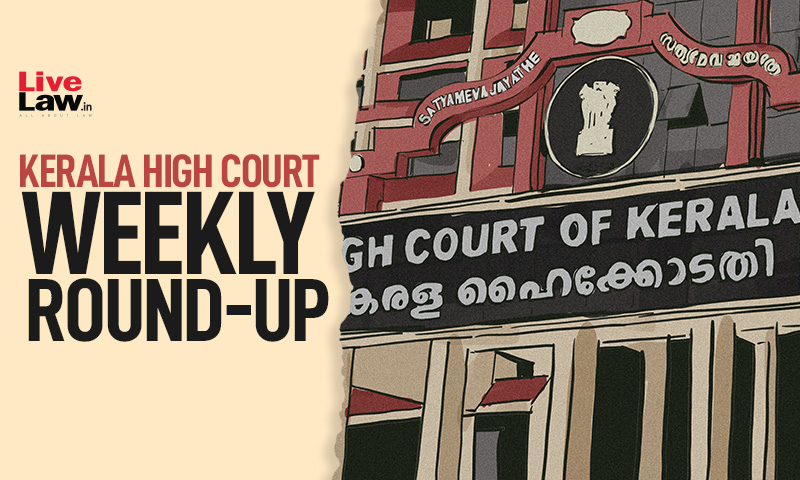 1. 'Grass Is Not Greener On The Other Side Of Fence': Kerala High Court To Radicalists In Terror Recruitment Case

The Court confirmed the conviction and sentence awarded to prime accused Thadiyantevida Nazeer and nine others in the Kashmir terror recruitment case in a judgment that runs to 205 pages. The Division Bench of Justice K Vinod Chandran and Justice C Jayachandran however, acquitted the 2nd, 14th and 22nd accused in the case since their role in the conspiracy were not established. The Court also recorded its appreciation for the tremendous work put in both by the Kerala Police and the NIA while remarking, "For those who have such radical thoughts, we can only say that the grass is not greener on the other side of the fence, if you just look at history."

The Court refused to entertain a Public Interest Litigation (PIL) petition that sought to prevent alleged forced vaccination of children across the State finding that the petitioner had moved the Court based on information received through social media. A Division Bench of Justice Devan Ramachandran and Justice Sophy Thomas dismissed the plea with interesting comments after the petitioner failed to place on record any specific instance of forced vaccination of minors.

3. KVAT Registration Once Cancelled Has To Be Published In Two Leading Daily Newspapers: Kerala High Court

The Court ruled that once a Kerala Value Added Tax (KVAT) registration is cancelled, it must be published in at least two major daily newspapers, and the dealer must be notified in accordance with Form No.5 B.Then only will the cancellation of registration be effective. Justice S.V. Bhatt and Justice Basant Balaji observed that as per Rule 19 of KVAT Rules, the application was filed on 20.2.2014. The registering authority, after cancelling the registration, ought to have issued the dealer a notice in Form No.5 B and published the details in at least two dailies in the State and also on the website of the Commercial Tax Department.

The Court held that short artificial breaks in service between successive contracts cannot be used as a device to deny maternity rights to the employees. Justice Raja Vijayaraghavan noted that as per the Government Order dated January 2021, the employee should have "actually" worked for a period of not less than 80 days immediately preceding her expected date of delivery or date of miscarriage to be eligible for maternity benefits and that artificial breaks are not a valid ground to deny the same.

The Court reiterated that the CIBIL scores of co-borrowers do not play a role in deciding applications for education loans since the eligibility conditions for sanctioning such priority sector loans should have a nexus with the object sought to be achieved by these loans. Justice N. Nagaresh also observed that imposing such conditions would defeat the very purpose of granting such loans, thereby discouraging banks from doing so.

7. SDPI & PFI Extremist Organisations Indulging In Serious Violent Acts; All The Same They Are Not Banned : Kerala High Court

The Court while dismissing a plea filed by the wife of deceased Rashtriya Swayamsevak Sangh (RSS) worker Sanjith seeking the investigation to be transferred to the CBI, observed that the accused belonged to extremist outfits. Justice K. Haripal had pronounced the judgment earlier this month after weeks of elaborate hearing, permitting the State Police to continue with their probe. The Judge remarked, "No doubt, SDPI and PFI are extremist organisations indulging in serious acts of violence. All the same, those are not banned organisations."

The Kerala High Court recently established that there is no prohibition or restrictions in law restraining an assignee or successors-in-interest from cutting or appropriating any trees standing on the assigned land. After an elaborate discussion on the relevant provisions, Justice N. Nagaresh found that since the charge under Section 97(3) of the Land Reforms Act does not exist in the case of the petitioner's land, the prohibition contained in Rule 29(6) of the KLR (Ceiling) Rules, 1970 would not apply in this case.

The Court has observed that a private tomb or cemetery cannot be constructed at the whims and fancies of any private individual, be it on his property or not, without securing an adequate licence from the District Collector. Justice Shaji P. Chaly held so after analysing Section 2(m) of the Kerala Panchayat Building Rules, 2011 under which a tomb would qualify as a building, thereby making it clear that without a licence from the concerned District Collector, no burial ground shall be opened, whether it be public or private.

The mystery deepens as the family of the Indian seafarer who went missing in Tunisian waters approached the Court seeking governmental intervention suspecting foul play in the entire episode. Justice T.R Ravi directed the Centre to get proper instructions in the matter on an urgent basis and file a statement as well. The developments ensued in a petition moved by the father of the 27-year-old seaman who went missing from his vessel.

The Supreme Court Collegium has approved the proposal for the appointment of the following Additional Judges of the Kerala High Court as Permanent Judges of that High Court: Justice Murali Purushothaman, Justice Ziyad Rahman A.A., Justice Karunakaran Babu, and Dr. Justice Kauser Edappagath.