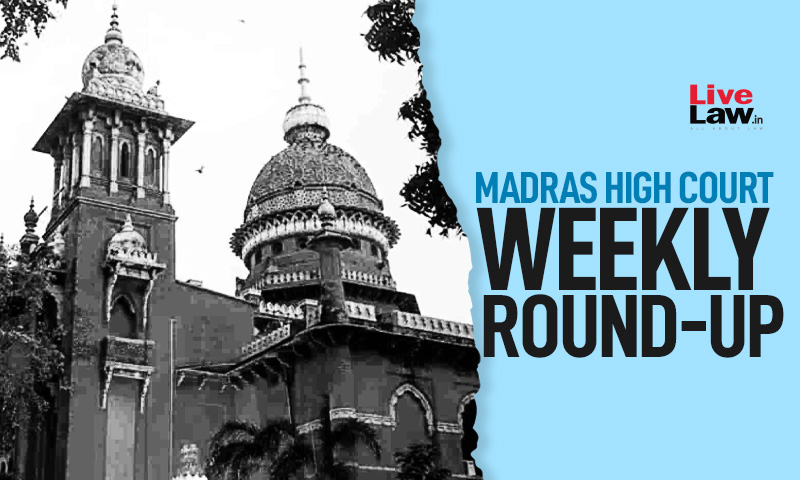 Sureshkumar v. The Regional Passport Officer and another, 2022 LiveLaw (Mad) 322

The Madras High Court recently reiterated that informations touching upon the right of privacy of third parties cannot be sought through RTI applications without putting them on notice.

Justice Anand Venkatesh was dealing with a plea seeking directions to the Tamil Nadu Information Commission to provide details with respect to persons who have registered themselves in the district employment office under the special category of Inter Caste Marriage and to furnish the certificates provided by such persons.

2. Statements Recorded U/S 164 CrPC Are Not Substantive Evidence, Can Only Be Used For Corroboration: Madras High Court Reiterates

The Madras High Court recently set aside an order of conviction of a man accused of murder after observing that the trial court was misled in corroborating the statement of witnesses recorded under S. 164 CrPC with the medical evidence when in fact all the independent witnesses had turned hostile.

Justice S Vaidyanathan and Justice AD Jagdish Chandira took note of the judicial precedents where the courts have clearly laid down that the statements recorded under Section 164 of the CrPC are not substantive evidence and that they can only be used to corroborate/contradict the statement of a witness.

3. When Prosecution Itself Is Infested With Motive, Court Can Interfere & Quash The Same To Prevent Abuse Of Process Of Law: Madras High Court

Case Title: Jaisankar v. The State and another

While quashing a final report against a man accused of being in possession of an intoxicating drug and charged with Section 4(1) (a) of the Tamil Nadu Prohibition Act 1937, the Madras High Court observed that the prosecution was a malafide one.

After going through the materials available on record, Justice N Sathish Kumar observed that though it was alleged that 96 rum bottles were found in possession of the accused, there was no evidence except the statement of the investigating officer. The court also noted that even though the courts do not generally go into the materials collected by the police, if it was found that the prosecution itself was without any material, the same could be quashed.

Allowing an application for alteration of FIR filed by an estranged wife, the Madras High Court recently directed the respondent police to register offences under Section 417 and 420 of IPC for cheating against the husband who deceived the wife by non-disclosing his impotency.

Justice V Sivagnanam of the Madurai Bench directed the respondent police to add the offences along with already existing Section 498-A and 406 and submit the final report within four months after investigation.

The Madras High Court recently reiterated that the Freedom Fighter's Pension could not be brought under the category of family income for grant of family pension. It observed that Freedom Fighter's pension is given to honor the sacrifices made by them for the nation in the freedom struggle. Justice B Pugalendhi thus allowed a woman's plea to draw a family pension arising out of her mother's service in addition to the freedom fighter's pension.

Case Title: Sureshkumar v. The Regional Passport Officer and another

The bench of Justice GR Swaminathan observed that field enquiry police officer play the most crucial in verification process and the buck stops with the nodal officer. "Involvement of the officials above the said rank may not really arise."

7. Madras High Court Directs TN Govt To Include Photographs Of President & Prime Minister In All Advertisements Of Chess Olympiad 2022

Case Title: R.Rajesh Kumar v. The State of Tamilnadu and others

On a plea seeking the inclusion of photographs of the Prime Minister and the President of India in the advertisements for the 44th Chess Olympiad organised by the Federation Internationale des Echecs [FIDE], the Madras High Court directed the State government to ensure that the pictures of the Prime Minister and the President are included in all the advertisements. The division bench of Chief Justice Munishwar Nath Bhandari and Justice S Ananthi also directed the government to ensure that in future events also, these directions are followed.

8. Dept. To Follow Procedure Set Out In Circular On The Issues Of Mismatch: Madras High Court Quashes VAT Assessment

The Madras High Court bench of Justice Anitha Sumnath has quashed the VAT assessment and directed the department to follow the procedure set out in the circular regarding the issue of mismatch.

The court ordered that the procedure set out in the circular be applied to the present case as well. The orders of assessment are set aside to enable both parties, i.e., the assessee as well as the department, to engage in the finalisation of the issue in line with the circular.

Case Title: Dr.R.Senthilkumar v. The State and others

Justice Teeka Raman observed that Homeopathy, Ayurveda, Siddha and Unani practitioners who are registered in the Tamil Nadu Board of Indian Medicine are eligible to practice in the respective system with Allopathy based on the training and teaching they had in the Course. The court however cautioned that such persons cannot exclusively practice Allopathy medicine.

The Madras High Court on Monday directed the Principal Secretary to Government, Home Department to take immediate steps to remove uniformed officers serving as orderlies at the residence of higher officials and to use these forces for the benefit of the public at large. Justice SM Subramaniam took note of a Government Order issued in 1979, abolishing the orderly system in Police Department. The court noted that All India Service Conduct Rules, 1968 clearly stipulate that the misuse of an official position is misconduct.

The court also directed the higher officials to voluntarily surrender all the orderlies which will show their real courage in terms of accepting the good conduct in accordance with the All India Services Conduct Rules.

While hearing the pleas relating to the upliftment of the LGBTQ+ community, the State Government on Friday, informed the Madras High Court that the suggested glossary was in the process of being finalized.

The state informed that the present glossary was too technical as per persons from the community and attempts were being made to simplify the terms as much as possible so that the same can be used without any difficulty.

It was informed that meetings being held with the the Tamil Etymological and Dictionary Project Department. These updated glossary will then be placed before the Chief Minister, for obtaining orders to publish it in the official gazette.

A litigant has recently moved the Madras High Court against the grant of a censor certificate to the Tamil movie Yaanai, starring Arun Vijay. The petitioner seeks revocation of the censor certificate and removal of certain portions of the movie contending that the same portrayed the fishermen's community in a bad light.

When the matter came up for consideration, the bench of Chief Justice Munishwar Nath Bhandari and Justice N Mala adjourned the matter as the counsel for the petitioner was absent.

Case Title: P.Kuppusamy v. The District Collector and others

In a matter pertaining to fraudulent appointment to the post of Operator of the Over Head Water Tank of Muthur Town Panchayat, the Madras High Court on Tuesday directed the jurisdictional police to register a criminal case and proceed in accordance with law.

Justice SM Subramaniam directed the Executive Officer to register a complaint setting out the entire facts along with the documents to the jurisdictional Police, within a period of one week. Upon receiving the complaint, the police was directed to register the same and proceed with the investigation. The Deputy Superintendent of Police, Tiruppur District was directed to file a status report after conducting investigation.