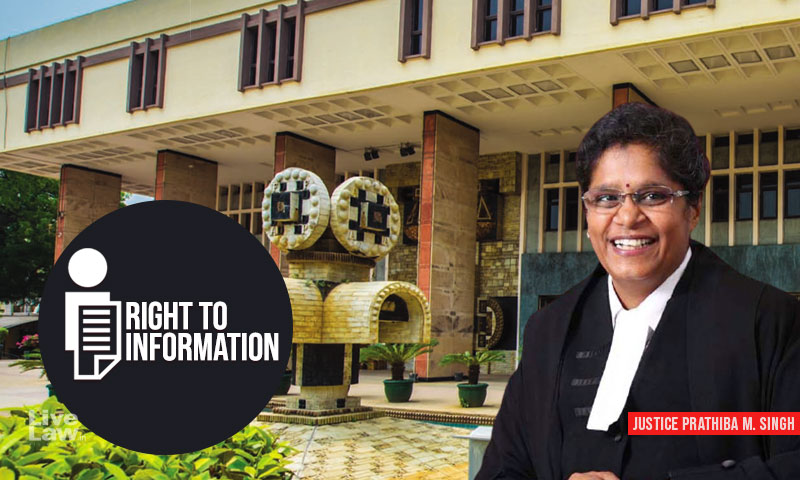 The Delhi High Court on Friday (29th January) clarified that whenever 'Personal Information' is sought under the 'Right To Information Act, 2005', the disclosure of applicant's interest in the information being sought would be necessary to establish his/her bonafides. By issuing this clarification, the Bench of Justice Prathiba M. Singh has modified her earlier Judgment dated...

The Delhi High Court on Friday (29th January) clarified that whenever 'Personal Information' is sought under the 'Right To Information Act, 2005', the disclosure of applicant's interest in the information being sought would be necessary to establish his/her bonafides.

By issuing this clarification, the Bench of Justice Prathiba M. Singh has modified her earlier Judgment dated 12th January 2021, wherein it was observed that disclosure of interest in information being sought under RTI act is necessary to establish applicant's bonafide.

This particular ruling (dated 12th January) by the Single Bench had come under severe criticism as many pointed out that the Order contradicted the Section 6(2) of the RTI Act.

[NOTE: Section 6 (2) of The Right To Information Act, 2005 states that "an applicant making request for information shall not be required to give any reason for requesting the information or any other personal details except those that may be necessary for contacting him".]

As reported by The Indian Express, the Court, on Friday, also observed that its earlier order was "completely wrongly interpreted". It added that the order pertains only to an applicant who was seeking the names of fathers and addresses of people in his RTI query.

Justice Prathiba Singh, on 29th January, observed that there has been an "inadvertent omission" in the earlier order (of 12th Janaury) and the Bench further clarified that whenever "personal information" is sought, the disclosure of interest is necessary.

The Order of 29th January

In effect, the Delhi High Court has now clarified that disclosure of interest in RTI application is required only when the applicant seeks personal info.

Earlier, the ruling had made the disclosure of interest necessary in the information being sought under RTI Act.

In her clarification, Justice Pratibha M. Singh modified paragraph 12 of order dated 12th January, 2021 (while adding the word "personal" to the particular line). The said paragraph 12 shall accordingly read as under-

Earlier, this very paragraph read as under,

The Court was hearing a plea by one Har Kishan, who was seeking information with regard to appointments made for the Multi-tasking Staff of the Presidential Estate, Rashtrapati Bhawan.

The Petitioner's daughter had also applied for the said post, however, this fact didn't find any mention in the writ petition and only when a query was put forth by the Court, the Petitioner revealed this fact to the Court.

The information with respect to the notification [of MTS (Multi-Tasking Staff) examination], total number of candidates who appeared in the said examination etc was provided to the petitioner, however, information relating to residential address, and father's names of all selected candidates was refused by the CIC.

Noting that plea was cleverly quiet about the fact that the Petitioner's daughter had applied for being considered for appointment for the said post, the Court had said,

"Non-disclosure of the same could result in injustice to several other affected persons, whose information is sought."

"The seeking of the above information, especially after the Petitioner's daughter did not obtain employment, clearly points to some ulterior motives," the Court had further remarked.

Even otherwise, the Court had observed that on merits, the information sought in respect of the names of the fathers and residential addresses of the candidates was completely invasive, and would be a roving and fishing enquiry.

The Court had noted,

"The said information which is sought is clearly protected under Section 8(1)(j) of the RTI Act which provides that any such information shall not be provided which constitutes personal information and is invasive of the privacy of individuals."