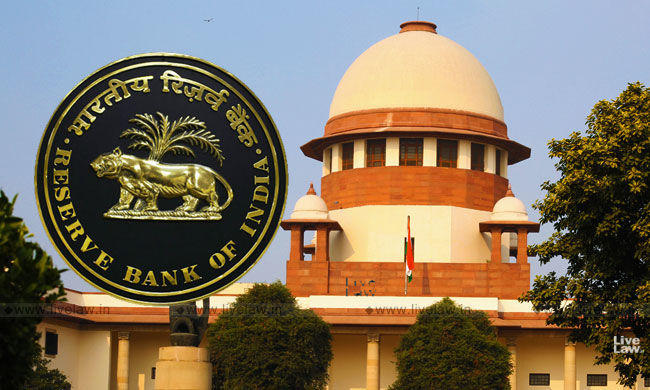 The Supreme Court on Wednesday dismissed the applications filed by certain banks seeking to recall the 2015 judgment in the case Reserve Bank of India v Jayantilal N. Mistry which had held that the RBI was obliged to disclose defaulters list, inspection reports, annual statements etc., related to banks under the RTI Act.A bench comprising Justices L Nageswara Rao and Vineet Saran dismissed...

The Supreme Court on Wednesday dismissed the applications filed by certain banks seeking to recall the 2015 judgment in the case Reserve Bank of India v Jayantilal N. Mistry which had held that the RBI was obliged to disclose defaulters list, inspection reports, annual statements etc., related to banks under the RTI Act.

A bench comprising Justices L Nageswara Rao and Vineet Saran dismissed the applications observing that the Supreme Court Rules did not have any provision for filing any application for recall of a judgment.

"There is no provision in the Supreme Court Rules for filing any application for recall of the judgment of this Court", the bench observed.

However, the bench has given liberty to the applicants to pursue other available legal remedies against the Jayantilal Mistry judgment.

About the Jayantilal Mistry case

In the Jayantilal Mistry case, the Supreme Court had rejected the argument of the Reserve Bank of India that it was holding the information of banks in a fiduciary capacity, and therefore such information was exempted from disclosure under the Right to Information Act as per Section 8(1)(e).

A bench comprising Jusitces MY Eqbal and C Nagappan had held that RBI does not place itself in a fiduciary relationship with the Financial institutions because, the reports of the inspections, statements of the bank, information related to the business obtained by the RBI are not under the pretext of confidence or trust.

The Court held that information obtained under a regulatory capacity or under the mandate of law cannot be termed as information held under fiduciary capacity.

"RBI is supposed to uphold public interest and not the interest of individual banks. RBI is clearly not in any fiduciary relationship with any bank. RBI has no legal duty to maximize the benefit of any public sector or private sector bank, and thus there is no relationship of 'trust' between them. RBI has a statutory duty to uphold the interest of the public at large, the depositors, the country's economy and the banking sector. Thus, RBI ought to act with transparency and not hide information that might embarrass individual banks", the judgment stated.

Later, contempt petitions were filed after the RBI contending that the disclosure policy framed by the RBI in 2016 were contrary to the directions in the Jayantlal Mistry judgment.

In April 2019, a bench comprising Justices Nageswara Rao and MR Shah directed the RBI to withdraw the disclosure policy to the extent it permitted exemptions contrary to the Supreme Court verdict (Girish Mittal v. Parvati V. Sundaram & Anr). The Court held that the violations of its direction by the RBI will be viewed seriously.

Following that, HDFC Bank, State Bank of India and few other banks filed application seeking recall of the Jayantlal Mistry case. They contended that the judgment was passed without hearing them, and hence was in violation of the principles of natural justice. It was further contended that the judgment required reconsideration after the Supreme Court declared "right to privacy" to be a fundamental right in 2017 in the KS Puttaswamy case.

Rejecting these arguments, the bench first said that the Supreme Court rules did not permit the filing of an application seeking recall of a judgment.

As regards the applicants' argument that the recall applications are maintainable when the judgment is passed without hearing the affected party, the bench noted that it was decision of RBI which was under challenge in that case.

Also, none of the banks made any effort to get themselves impleaded in the case, when it was being heard by the Court.