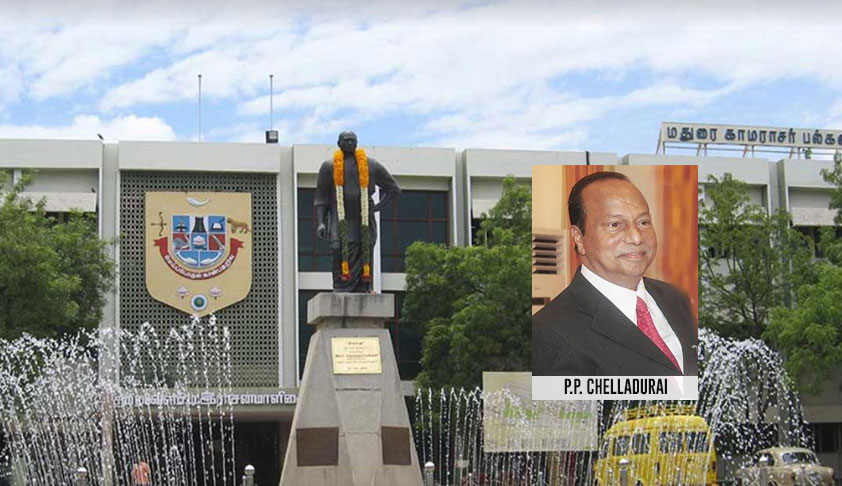 The Madras High Court has set aside the appointment of Dr PP Chellathurai as Vice-Chancellor of Madurai Kamaraj University.

A division bench of Chief Justice Indira Banerjee and Justice M Sundar, while allowing PILs filed by filed by Lionel Antony Raj and Traffic Dr Ramaswamy, on the ground that the proceedings of the search committee are flawed without expressing any opinion on eligibility and noticing that the appointee been dropped/deleted from the criminal case/charge sheet after further investigation.

The bench has made an interesting analysis of the affidavits by two members in a three-member ‘search’ committee, who stated that there were no deliberations, discussions or consultations, much less consensus and the name of the ultimate appointee was unilaterally thrust and included in the panel in a high-handed manner by the third member, who is the convenor.

The affidavit as recorded by the court narrated the selection process as follows: “The meeting on 19.05.2017 was convened (by the Convenor) at 04.30 pm, but the Convenor himself arrived at 04.55 pm only and stated to the surprise of other two members that the meeting with the Chancellor (His Excellency Governor) was at 05.30 pm, hurried the meeting through, thrust the name of the appointee in the three names panel and proceeded to the Raj Bhavan. Therefore, the entire so-called process of selection has taken place between 04.55 pm and 05.20 pm i.e., in 25 minutes on 19.05.2017, when the three members proceeded to meet the Chancellor at Raj Bhavan.”

Analysis of three scenarios: If true, if false, if only partially true

The court assumed three scenarios and made the analysis as follows:

Firstly, the court assumed the statements of two members as true and observed that ‘in a three-member committee at this level, when two out of the three members speak against the third lone member, who is also the Convenor it cannot be brushed aside lightly’.

The court also observed that, even if the statements made by two members is false, when appointments to such high offices, particularly academic institutions like universities are made, it cannot be sustained when two out of a three-member committee take a diametrically opposite stand and say they never wanted the appointee to be recommended and in fact opposed his inclusion in the panel.

Secondly, assuming these statements as false, the court said: “A Vice-Chancellor cannot be chosen from a panel recommended by a committee constituted by members, who turn turtle and take a diametrically opposite position when the appointment is challenged in a court of law, as it is a serious infarction of the spirit of MKU Act qua selection of Vice-Chancellor.”

Thirdly, the court also considered the third possible scenario where the versions of the convenor on the one side and the two members on the other side consist of partially factually correct and partially factually incorrect versions. The court observed that, in such a fact scenario also, the selection is in violation of the spirit behind Section 11 of the Madurai Kamaraj Act, i.e., the committee should be independent and it should be a broad-based committee paving the way for broad-based consultation, deliberations and debates, so that a candidate who is the best blend of eligibility and suitability is selected.

The court added that admitted positions based on pleadings reveals that either the search committee was constituted by members who are capable of turning turtle and pleading something completely contrary to what actually transpired or that two out of the three members have not been able to assert themselves, though they were in a majority and simply put pen on paper on the dotted lines.

The bench also observed that a university is a seat of learning and the highest seat in a university is so sanctus that the selection process cannot just be a routine, but should be a rigor by itself. It said: “Universities are prime movers which catalyse the ever-expanding vistas of knowledge and learning. Such institutions are not limited to literacy programmes, but are crucial components of the machinery of nation-building education, as they define, develop and decide the destiny of generations to come. Perceived from this point of view, this court is of the considered opinion that offices of such nature are so sanctus that when there are statutory violations in selection procedure, the curative response is non-negotiable and inevitable.”