Social Exclusion Of Women, Based On Menstrual Status, Is A Form Of Untouchability: Justice DY Chandrachud 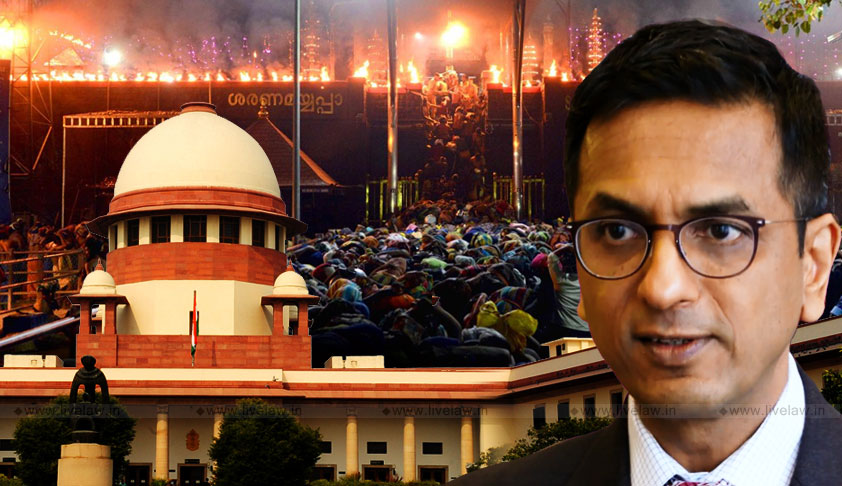 “Women have a right to control their own bodies. The menstrual status of a woman is an attribute of her privacy and person. Women have a constitutional entitlement that their biological processes must be free from social and religious practices, which enforce segregation and exclusion. These practices result in humiliation and a violation of dignity.”The judgment by Justice Dhananjaya...

“Women have a right to control their own bodies. The menstrual status of a woman is an attribute of her privacy and person. Women have a constitutional entitlement that their biological processes must be free from social and religious practices, which enforce segregation and exclusion. These practices result in humiliation and a violation of dignity.”

The judgment by Justice Dhananjaya Y Chandrachud, which runs upto 165 pages, is the longest among all four judgments delivered in the Sabarimala case.  Most importantly, the observation made by Justice Chandrachud that social exclusion of women, based on menstrual status, is a form of untouchability, will have far-reaching consequences.

Justice Chandrachud, like the CJI, holds that devotees of Lord Ayyappa do not satisfy the judicially enunciated requirements to constitute a religious denomination under Article 26 of the Constitution.  Though he concurs with CJI’s opinion that the practice of excluding women from the temple at Sabarimala is not an essential religious practice, he goes further to hold that a claim for the exclusion of women from religious worship, even if it be founded in religious text, is subordinate to the constitutional values of liberty, dignity and equality. He also holds that exclusionary practices are contrary to constitutional morality and observes that constitutional legitimacy shall not be granted to practices which derogate from the dignity of women and to their entitlement to an equal citizenship. The judge also holds that notions of “purity and pollution”, which stigmatize individuals, have no place in a constitutional order. Finally, the notifications issued by the Devaswom Board prohibiting the entry of women between the ages of 10 and 50, are held unconstitutional.

Without doubt, the judgment by Justice Chandrachud is a feast to read as it covers almost every aspect of the Sabarimala case, and beyond.  The judgment succinctly narrates the history of Sabarimala temple and Lord Ayyappa. Justice Chandrachud deals with almost every submission made pertaining to essential religious practices, religious denomination status of Ayyappa devotees, Article 17, “untouchability” and the notions of purity, constitutional rights of the deity.

Article 17 also applies to the systemic humiliation, exclusion and subjugation faced by women

While the judgment authored by the Chief Justice do not address the argument based on Article 17 (abolition of untouchability) of the Constitution, Justice Chandrachud widely discusses it vis-à-vis the issue of practice of exclusion based on menstruation constitutes a form of untouchability and is prohibited by Article 17 of the Constitution, egregiously raised during the arguments, particularly by Senior Advocate Indira Jaising and Amicus Curiae Raju Ramachandran.

The judge discusses the history, the constitutional assembly debates, in relation to Article 17 and observes that background of Article 17 lies in protecting the dignity of those who have been victims of discrimination, prejudice and social exclusion.

After a detailed analysis, the judge observes: “The operation of the words used by the Constitution cannot be confined to a particular form or manifestation of “untouchability”. The Constitution as a constantly evolving instrument has to be flexible to reach out to injustice based on untouchability, in any of its forms or manifestations. Article 17 is a powerful guarantee against exclusion. As an expression of the anti-exclusion principle, it cannot be read to exclude women against whom social exclusion of the worst kind has been practiced and legitimized on notions of purity and pollution.”

The judge further holds that Article 17 not only applies to untouchability practices in relation to lower castes, but it will also apply to the systemic humiliation, exclusion and subjugation faced by women.

Social exclusion of women, based on menstrual status, is a form of untouchability

He further observes that the ideology of “purity and pollution” is a violation of the constitutional right against “untouchability”.

“Prejudice against women based on notions of impurity and pollution associated with menstruation is a symbol of exclusion. The social exclusion of women, based on menstrual status, is but a form of untouchability which is an anathema to constitutional values. As an expression of the anti-exclusion principle, Article 17 cannot be read to exclude women against whom social exclusion of the worst kind has been practiced and legitimized on notions of purity and pollution. Article 17 cannot be read in a restricted manner. But even if Article 17 were to be read to reflect a particular form of untouchability, that article will not exhaust the guarantee against other forms of social exclusion. The guarantee against social exclusion would emanate from other provisions of Part III, including Articles 15(2) and 21. Exclusion of women between the age groups of ten and fifty, based on their menstrual status, from entering the temple in Sabarimala can have no place in a constitutional order founded on liberty and dignity,” Justice Chandrachud said.

Justice Chandrachud has also taken serious note of customs which consider menstruating women as polluting the surroundings. He observed that irrespective of the status of a woman, menstruation has been equated with impurity, and the idea of impurity is then used to justify their exclusion from key social activities.

Here he makes significant observation: “Our society is governed by the Constitution. The values of constitutional morality are a non-derogable entitlement. Notions of “purity and pollution”, which stigmatize individuals, can have no place in a constitutional regime. Regarding menstruation as polluting or impure, and worse still, imposing exclusionary disabilities on the basis of menstrual status, is against the dignity of women which is guaranteed by the Constitution. Practices which legitimize menstrual taboos, due to notions of “purity and pollution”, limit the ability of menstruating women to attain the freedom of movement, the right to education and the right of entry to places of worship and, eventually, their access to the public sphere. Women have a right to control their own bodies. The menstrual status of a woman is an attribute of her privacy and person. Women have a constitutional entitlement that their biological processes must be free from social and religious practices, which enforce segregation and exclusion. These practices result in humiliation and a violation of dignity. Article prohibits the practice of “untouchability”, which is based on notions of purity and impurity, “in any form”.”

Justice Chandrachud makes a significant observation regarding the contention raised by Advocate J Sai Deepak that right to preserve the celibacy of the deity is a protected constitutional right and extends tys merely because a deity has been granted limited rights as juristic persons under statutory law does not mean that the deity necessarily has constitutional rights.

What is protected is in conformity with fundamental constitutional values

On essentiality of religious practices, Justice Chandrachud, like the CJI, observes that, in determining the essentiality of a practice, it is crucial to consider whether the practice is prescribed to be of an obligatory nature within that religion. He also adds that a practice claimed to be essential has been carried on since time immemorial or is grounded in religious texts, does not lend to it constitutional protection unless it passes the test of essentiality. “If a practice is optional, it has been held that it cannot be said to be ‘essential’ to a religion. A practice claimed to be essential must be such that the nature of the religion would be altered in the absence of that practice. If there is a fundamental change in the character of the religion, only then can such a practice be claimed to be an ‘essential’ part of that religion,” he said.

The judge does not stop at this, and further remarks that the Supreme Court has witnessed claims resting on the essentiality of a practice that militate against the constitutional protection of dignity and individual freedom under the Constitution. He says: “It is the duty of the courts to ensure that what is protected is in conformity with fundamental constitutional values and guarantees and accords with constitutional morality. While the Constitution is solicitous in its protection of religious freedom as well as denominational rights, it must be understood that dignity, liberty and equality constitute the trinity which defines the faith of the Constitution. Together, these three values combine to define a constitutional order of priorities. Practices or beliefs which detract from these foundational values cannot claim legitimacy.”

The essential religious practices test should merit a close look

In the concluding part of the judgment ‘Roadmap to Future’, the judge observes that where a religious practice causes the exclusion of individuals in a manner which impairs their dignity or hampers their access to basic goods, the freedom of religion must give way to the over-arching values of a liberal constitution. He extensively quotes Gautam Bhatia on anti-exclusion principle and says: “The essential religious practices test should merit a close look, again for the above reasons, in an appropriate case in the future.”

He adds: “Would the Constitution have intended to preserve the assertion of group rights even at the cost of denigrating individual freedoms? Should the freedom conferred upon a group - the religious denomination under Article 26(b) – have such a broad canvas as would allow the denomination to practice exclusion that would be destructive of individual freedom? The answer to this, in my view, would have to be in the negative for the simple reason that it would be impossible to conceive of the preservation of liberal constitutional values while at the same time allowing group rights to defy those values by practicing exclusion and through customs which are derogatory to dignity.”

In the conclusion part of judgment, the judge observes: “In a dialogue about our public spaces, it raises the question of the boundaries of religion under the Constitution. The quest for equality is denuded of its content if practices that exclude women are treated to be acceptable. The Constitution cannot allow practices, irrespective of their source, which are derogatory to women. Religion cannot become a cover to exclude and to deny the right of every woman to find fulfillment in worship.”

He quotes Dr. Ambedkar and remarks: “In his speech before the Constituent Assembly on 25 November 1949, Dr B R Ambedkar sought answers to these questions: ‘How long shall we continue to live this life of contradictions? How long shall we continue to deny equality in our social and economic life?’ Sixty eight years after the advent of the Constitution, we have held that in providing equality in matters of faith and worship, the Constitution does not allow the exclusion of women.”

Justice Chandrachud concludes the long judgment with this observation: “Liberty in matters of belief, faith and worship, must produce a compassionate and humane society marked by the equality of status of all its citizens. The Indian Constitution sought to break the shackles of social hierarchies. In doing so, it sought to usher an era characterized by a commitment to freedom, equality and justice. The liberal values of the Constitution secure to each individual an equal citizenship. This recognizes that the Constitution exists not only to disenable entrenched structures of discrimination and prejudice, but to empower those who traditionally have been deprived of an equal citizenship. The equal participation of women in every sphere of the life of the nation subserves that premise.”