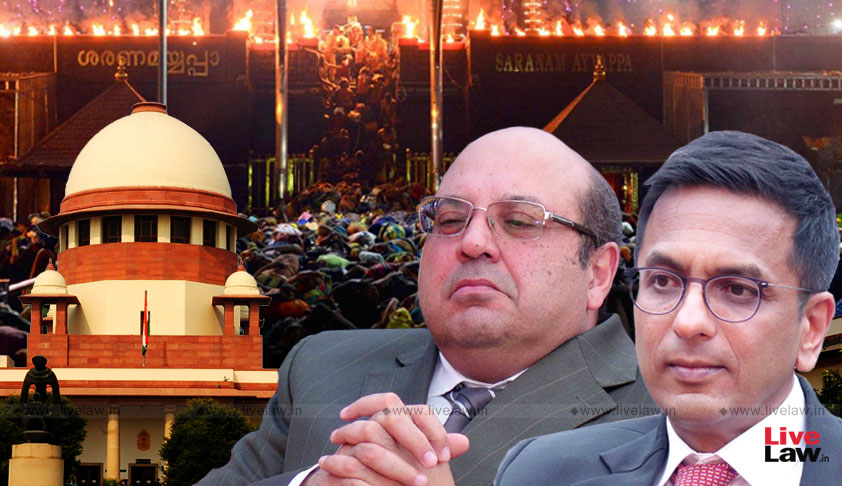 Justice RF Nariman in Adultery Judgment liberated the Genie Of Yusuf and Justice DY Chandrachud in Sabarimala case did the exorcism of Ghost of NarasuIn the year 1951, the Bombay High Court Bench of Chief Justice MC Chagla and Justice PB Gajendragadkar delivered two judgments, which have been discussed in recent constitution bench judgments in Adultery and Sabarimala Cases.Justice Rohinton...

In the year 1951, the Bombay High Court Bench of Chief Justice MC Chagla and Justice PB Gajendragadkar delivered two judgments, which have been discussed in recent constitution bench judgments in Adultery and Sabarimala Cases.

Genie is a spirit of Arabian folklore, as depicted traditionally imprisoned within a bottle.

Justice RF Nariman found such a genie in the Bombay HC judgment of Yusuf Abdul Aziz and has set it free. He quotes the following passage in the judgment terming it as ‘instructive.’

“Mr. Peerbhoy is right when he says that the underlying idea of Section 497 is that wives are properties of their husbands. The very fact that this offence is only cognizable with the consent of the husband emphasises that point of view. It may be argued that Section 497 should not find a place in any modern Code of law. Days are past, we hope, when women were looked upon as property by their husbands. But that is an argument more in favour of doing away with Section 497 altogether.”

Before CJ Chagla and Justice Gajendragadkar, a man who was facing prosecution for adultery moved a petition challenging Section 497 of the Indian Penal Code. His core contention was that His contention is that Section 497 offends against the provisions of Articles 14 and 15 of the Constitution. CJ Chagla, who authored the judgment, though made the above-quoted observations finally dismissed the challenge observing that it does not contravene any of the fundamental rights laid down in the Constitution.

But while dismissing the petition, the High court granted Yusuf a certificate to appeal before the Supreme court, probably because he thought that the validity of Section 497 deserves to be considered by the Apex court.

However, the Supreme court also did not bother to go deep into this issue and dismissed the appeal observing thus: “Article 14 is general and must be read with the other provisions which set out the ambit of fundamental rights. Sex is a sound classification and although there can be no discriminate in general on that ground, the Constitution itself provides for special provisions in the case of women and children. The two articles read together validate the impugned clause in section 497 of the Indian Penal Code. “

This judgment of the Apex court delivered in 1954 has been now overruled by the Constitution bench unanimously. Justice Nariman termed that judgment as an instance of “Homer Nodding” (meaning: not even the most vigilant and expert are immune to error”).

Had there been a broader challenge to section 497 IPC in the year 1951 itself, the unconstitutional provision would not have remained in the penal statute, only to be struck down 7 decades later.

While overruling the SC judgment in Yusuf Abdul Aziz, Justice Nariman observed: “Section 497 is, in constitutional language, an “existing law” which continues, by virtue of Article 372(1), to apply, and could not, therefore, be said to be a law made by the “State” meaning any of the entities referred to above.”

The Judge also observed that ratio in Yusuf Abdul Aziz does not extend to upholding the entirety of the provision or referring to any of the arguments made before us for striking down the provision as a whole.

Exorcism of Ghost of Narasu

Justice Chandrachud observed that the Bombay High court judgment in State of Bombay v Narasu Appa Mali requires a detailed reconsideration as immunizing custom, usage and personal laws from constitutional scrutiny would tantamount to denial of the primacy of the Constitution.

The State of Bombay v Narasu Appa Mali is a judgment delivered by Bombay High Court in the year 1952 which held that personal laws are not “law” within the meaning of Article 13 of the Constitution of India. While Chief Justice Chagla opined that ‘custom or usage’ would be included in the definition of ‘laws in force’ in Article 13(1), Justice Gajendragadkar held that they would not.

This judgment has never been overruled by the Supreme court. Though in the Triple Talaq judgment, Justice RF Nariman doubts correctness of this decision, it held that it was “unnecessary…to decide whether the judgment in is good law.”

Highlighting this aspect, Senior Advocate Indira Jaising had written an article (‘The Ghost of Narasu Appa Mali is stalking the Supreme Court of India’) in which she said: “The triple talaq case presented an ideal opportunity to exorcise the ghost of Narasu Appa and hold that unilateral talaq was discriminatory and that the discriminant was based on sex alone. This did not happen. I am disappointed that the ghost is as clearly visible today as it was in 1950 when the judgment was delivered, perhaps even more so. It stalks every court as it did the Supreme Court of India in the Triple Talaq judgment delivered on the 22nd of August, 2017, by what has been described as an “inter-faith” court. What is it about religion that blinds a judge to gender justice? Can they in their minds, not separate their own religion from the judicial function?”

Justice Chandrachud made this mention of this Ghost Narasu, while dealing with submissions made by Senior Advocate K. Parasaran, who represented the Travancore Devaswom Board. He had contended that the exclusion of women from the Sabarimala temple constitutes a custom.

Justice Chandrachud also said that the decision in Narasu, in immunizing uncodified personal law and construing the same as distinct from custom, deserves detailed reconsideration in an appropriate case in the future. He said: “In the quest towards ensuring the rights guaranteed to every individual, a Constitutional court such as ours is faced with an additional task. Transformative adjudication must provide remedies in individual instances that arise before the Court. In addition, it must seek to recognize and transform the underlying social and legal structures that perpetuate practices against the constitutional vision. Subjecting personal laws to constitutional scrutiny is an important step in this direction.”

The judge, rejecting the argument advanced by the Senior Advocate, said: “Practices, that perpetuate discrimination on the grounds of characteristics that have historically been the basis of discrimination, must not be viewed as part of a seemingly neutral legal background. They have to be used as intrinsic to, and not extraneous to, the interpretive enquiry. The case before us has raised the question of whether it is constitutionally permissible to exclude women between the ages of ten and fifty from the Sabarimala Temple. In the denial of equal access, the practice denies an equal citizenship and substantive equality under the Constitution. The primacy of individual dignity is the wind in the sails of the boat chartered on the constitutional course of a just and egalitarian social order.”