"Is This Not Maligning The Court": Justice Arun Mishra On Request For His Recusal From Hearing S.24 Land Acquisition Matter 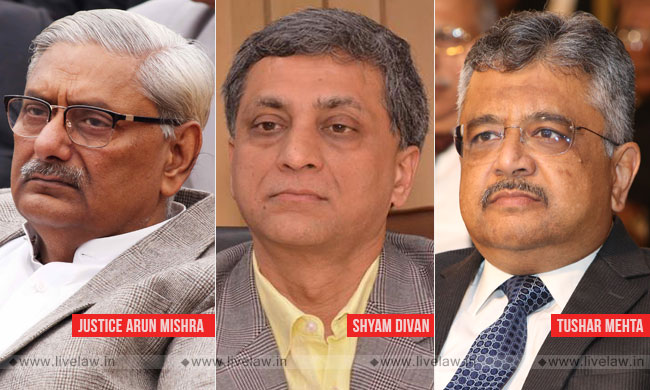 "All of us have dealt with the issue some time or the other. Tell me who has not been a part? So should the disqualification be for all of us?...we would like to know what is the question of law. It is not a question of propriety anymore. It is a legal issue. Whether we want to hear it or not is not an issue", said Justice Arun Mishra on Tuesday in response to a plea for his recusal from...

"All of us have dealt with the issue some time or the other. Tell me who has not been a part? So should the disqualification be for all of us?...we would like to know what is the question of law. It is not a question of propriety anymore. It is a legal issue. Whether we want to hear it or not is not an issue", said Justice Arun Mishra on Tuesday in response to a plea for his recusal from the interpretation of section 24 of the land acquisition Act, which stems from his February, 2018 judgment in Indore Development Authority.

"Is this not maligning the court? If you had left it to me, I would have decided. Come to my chamber and I will tell you what I would have done. But you are taking to the social media to malign me! The Chief Justice also! Who is responsible? Can this be the atmosphere of the court? It cannot take place like this...Tell me one single judge who has not taken a view on this, who is not a signatory? So all of us are disqualified? Can everybody be maligned like this?", he continued.

"One, a claim of partiality not only undermines the presiding officer but also the other members of the bench as their views may be different...two, the lead judgment in Golaknath was delivered by Justices Sikri and Shelat that Fundamental Rights are untouchable. When they later sat on the Kesavananda Bharti bench, they changed their view...three, right now we are on the pure interpretation of a section, without the baggage of either Pune Municipal Corporation or Indore Development Authority...and four, there is no Hon'ble judge who has not expressed any opinion on the issue. So it would not be tenable in good taste"

"I am not saying that Your Lordship must recuse as a legal principle...I am only saying that you may consider it...we leave it to you", persisted Senior Counsel Shyam Divan.

"You are talking about propriety...So why was this request not made first before my bench before taking it to the social media?", commented Justice Mishra.

As Senior Advocate Rakesh Dwivedi spoke of justice not only being done but also to be seen as being done, Justice Mishra remarked, "There are unspoken issues here...You understand and I understand what is at stake"

Stating that there is more to this issue, Justice Mishra indicated how Justice Patnaik had in similar circumstances proceeded to decide the matter, even in the face of prayers for recusal.

Justice Ravindra Bhat also added that there could be instances where a judge has taken a particular view in the past, perhaps as a High Court judge, but that could not be a ground to claim recusal.

"Can this objection be raised in writing, taking responsibility of the consequences? An issue regarding the impartiality of the bench is too serious to be made as oral submissions. There must be an application accompanied by an affidavit stating the source of the information. It cannot be someone's fanciful imagination", insisted the Solicitor General.

"There is no question that the Chief Justice can be compelled to make a particular bench, or that Your Lordships would permit any bench-shopping. Anyone here should not be affected by what is said on social media. We as an institution must be robust enough not to listen to that chatter and continue with our work uninfluenced...we should only be guided by our principles and precedents", advanced Mr. Diwan.

"Nobody takes the social media seriously, much less the court. But we are witnessing a pattern here where objections are made in advance on the web, or an article is circulated, to influence the decision-making on a question which is to be raised before the court. An article is written a few days before an important hearing, or a tweet goes viral (Justice Vineet Saran noted that discussions also take place on TV)...Of course, it does not succeed in influencing but that is Your Lordships' majesty...But this is an issue to be decided", persisted Mr. Mehta.

"Now that the matter has been referred to a larger bench, can we not be a part of it? What is the harm in saying that a judgment is not correct? Judgments are not the halting place but the stepping stones. That is how we learn and change. Otherwise, we will never become wise. The law will never develop", observed Justice Mishra.

"If judges are to be so attacked, what will be left of the Supreme Court? Left to me, I would have decided but here the entire institution is being maligned. You are making the functioning of the judiciary difficult...we are only concerned about our integrity and that of the institution. If we are satisfied, we will take it (the hearing) forward. Otherwise, we are doing injustice to the law and falling prey to (unclear)," said Justice Mishra.

"We may be criticised, right or wrong or whatever. I may not be a hero. Let me be blemished...but the test is that of conscience. I have lived up to this and it is good enough for me...I am speaking from the heart, and not based on the law. If I believe I can do justice in a case, uninfluenced by anyone but God, I do it. Where the integrity of the institution is concerned, I am the last person to recuse", added Justice Mishra.

"A case cannot be fixed before me...I am not biased. I am not influenced by even my own judgment, only by legal principles...If I am satisfied of (unbiasness) and of the integrity of the institution, I feel that I am succumbing (in recusing)...Let's be fair. You are all senior counsel. Everybody knows how and why these things are happening...", declared Justice Mishra.