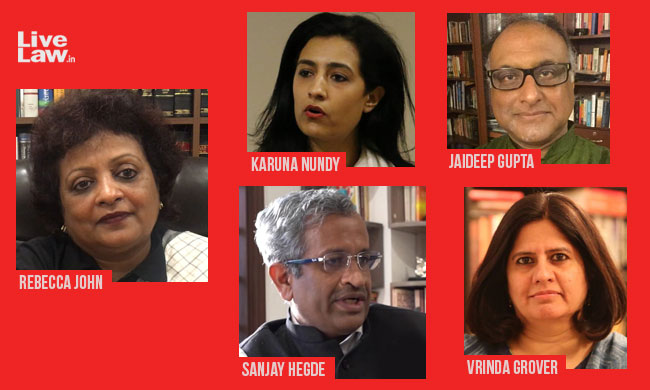 The country was barely recovering from the news of the horrendous gangrape and murder of the 26-year old veterinarian which took place in Hyderabad, when we were hit with the news of a cold-blooded encounter in the wee hours of 6th December which led to the death of the four accused of committing the heinous crime. As the details regarding the encounter slowly and steadily came to see...

The country was barely recovering from the news of the horrendous gangrape and murder of the 26-year old veterinarian which took place in Hyderabad, when we were hit with the news of a cold-blooded encounter in the wee hours of 6th December which led to the death of the four accused of committing the heinous crime.

As the details regarding the encounter slowly and steadily came to see the light of day, fissures started appearing in the fabric of society and heated debates arose with respect to whether the encounter was a symbol of vigilante justice or a symbolic murder of every value preached by our Constitution.

Multiple leading lawyers have come forward to comment on their perception of whether the encounter was symptomatic of the systemic failure of our institutions. Their condemnation and criticism of the Hyderabad encounter is wrought with consternation.

"This appears to be an extra-judicial execution which is totally illegal. I will not even call it an encounter. An encounter presupposes an armed combat and firing in self-defence. At 3:00 A.M. in the morning, with people in police custody, trying to escape while recreating a crime scene, is not a story that will be easily believable. The police are relying on public support or extreme gullibility, more likely the former. There must be an FIR and a full criminal investigation by an independent agency, along with a judicial inquiry as well. Those who cheer and encourage such executions, may do well to recognize, that destruction of the rule of law, and descent into a police state, is not what this country is about."

A conversation with Senior Advocate Rebecca John shed a light on the multiple aspects that underlined the commission of such an encounter and what it bode for the Constitutional development of our society. With the anguish palpable in her voice, John stated that in all her years of practice as a criminal lawyer she had prosecuted and defended people and many were acquitted by courts after disbelieving the case of the prosecution. But, she has never witnessed such a brazen attempt to subvert due process of law; "these men were accused, not convicted - they were on their first remand and even before basic facts were put before a court , they were shot dead."

"There is anguish that the judicial system has failed . That is true to a great extent. But you need to invest in and strengthen the system to prevent systemic failure. In this case, you did not even give the system a chance. Committing such an act in public gaze is absolutely frightening. If this is the will of the people, it is a cause for grave concern."

On parallels being drawn with the 2012 Nirbhaya case and how the convicted rapists were yet to be hanged, John commented:

"Has there been no justice in the Nirbhaya rape case? Let's deconstruct facts. 1) 5 men stood trial - one in juvenile court, the other four in a regular sessions court .2) one committed suicide in Tihar jail. 3) The juvenile was punished as per the applicable provisions of of the Juvenile Justice Act .4) The three remaining men were convicted of rape and murder by the sessions court, the convictions were upheld in the Delhi High Court and the Supreme Court . 5) They were never released on bail - not for a single day .6) They are presently on death row awaiting the fate of their mercy petition. Justice has been served . Unless you equate the final act of execution as the only component of justice. Executing a person should and must take time. There are constitutional protections that a death row convict can access He should be allowed to access them".

John very astutely brought the underlying issues of caste and class that mar such incidents:

"There is always a class angle. These were four poor people. What if they had been politicians? What if the situation had been reversed and it was a poor woman who had been raped by affluential men? Would the same end have met them?"

On being asked about the way forward, John said:

"If it was in self defence, it was perfectly justified. If it was an extrajudicial killing, then it was murder most foul, specially because the persons killed were in police custody (the word is hifazat, after all). People are celebrating it either ways. This is unfortunate. A nation that celebrates murderers will come to grief without fail. After all, we cannot replace our courts with mob justice. Reforming the system is certainly something we need to do. Let's talk about that. But, till it improves, we are not at liberty to take extrajudicial measures."

"SAY NO TO TRIGGER TRACK INJUSTICE! This is absolutely unacceptable. So all that the state will do in the name of ensuring that women live as equal and free citizens is to add to its arsenal of unlimited arbitrary violence! Supreme Court of India has directed that in every encounter case – There must be an FIR registered against the police and an investigation; and an independent judicial enquiry into this "encounter". No Investigation, no Prosecution, these killings distract the pubic and save the police and state from any accountability. NO POLICE "ENCOUNTER" IN THE NAME OF WOMEN."

Unfortunately, in retaliation to this post, Grover has received calls from men threatening her with rape.

"These are people celebrating the encounter killing of the 4 suspects in Hyderabad and applauding the police for "instant justice". So next time you cite the public as the rationale – please hear closely what this public wants. This public is not exhausted by the delays in the justice system. This public doesn't believe in the rule of law. They believe in retributive mob justice. They are not opposing patriarchy, misogyny or violence against women. Toxic masculinity can never be the answer -not of the rapists, not of the cops, not of the public."

Advocate Karuna Nundy on Twitter, expressed her shock and dismay at the blatant flouting of the rule of law.

"Now nobody will ever know if the four men killed by the police were innocent men, arrested fast to show action. And whether four of the most brutal rapists roam free, to rape and kill more women."

Nundy stated that the governments were squarely responsible for the loss of faith in the judicial system. She laid down a list of suggestions that needed to be inculcated by the governments in order to avoid a recurrence of mob justice: 1. Appoint more judges and police, after assessing them for gender orientation. 2. Strengthen the investigation so that the right people are caught, and fast. 3. Bring in robust witness protection programmes.

Be aware, the macho men dancing in the twitter streets right now will also defend the right of husbands to rape in marriage - the legality of marital rape- and campaign against s498A. 3/n