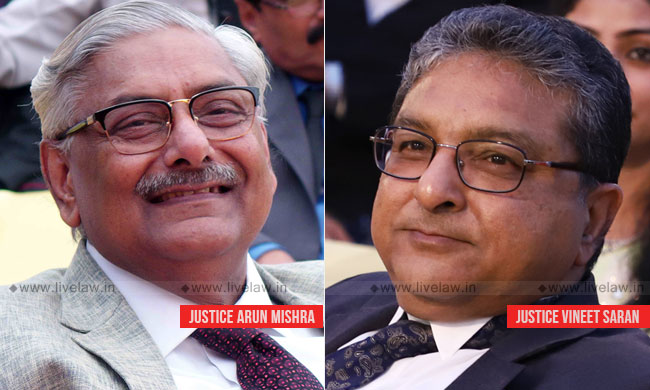 x
"Non maintenance of record is spring board for commission of offence of foeticide, not just a clerical error."

The Supreme Court has upheld the Constitutional Validity of Sections 23(1) and 23(2) of the Pre-conception and Pre-natal Diagnostic Techniques (Prohibition of Sex Selection) Act, 1994 . Dismissing a writ petition filed by Federation of Obstetrics and Gynecological Societies of India (FOGSI), the bench comprising Justice Arun Mishra and Justice Vineet Saran observed...

The Supreme Court has upheld the Constitutional Validity of Sections 23(1) and 23(2) of the Pre-conception and Pre-natal Diagnostic Techniques (Prohibition of Sex Selection) Act, 1994 .

Dismissing a writ petition filed by Federation of Obstetrics and Gynecological Societies of India (FOGSI), the bench comprising Justice Arun Mishra and Justice Vineet Saran observed that dilution of the provisions of the Act or the Rules would only defeat the purpose of the Act to prevent female foeticide, and relegate the right to life of the girl child under Article 21 of the Constitution, to a mere formality.

The court also held that complete contents of Form 'F' are mandatory.

The Federation had approached the Apex Court seeking decriminalizing of anomalies in paperwork/record keeping/clerical errors in regard of the provisions of the Act contending that the same is violative of Articles 14, 19(1)(g) and 21 of the Constitution of India.

In this regard, the bench observed:

"Section 23 of the Act, which provides for penalties of offences, acts in aid of the other Sections of the Act is quite reasonable. It provides for punishment for any medical geneticist, gynecologist, registered medical practitioner or a person who owns a Genetic Counselling Centre, a Genetic Clinic or a Genetic Laboratory, and renders his professional or technical services to or at said place, whether on honorarium basis or otherwise and contravenes any provisions of the Act, or the Rules under it."

The Federation was essentially aggrieved with Section 23 equating, what they term as 'clerical errors' on the same footing with the actual offence of sex determination. According to them the Act does not distinguish between criminal offences and the anomalies in paperwork like incomplete 'F'-Forms, clerical mistakes such as writing NA or incomplete address, no mentioning of the date, objectionable pictures of Radha Krishna in sonography room, incomplete filling of Form 'F', indication for sonography not written, faded notice board and not legible, striking out details in the Form 'F' etc. Even the smallest anomaly in paperwork which is in fact an inadvertent and unintentional error has made the obstetricians and gynecologists vulnerable to the prosecution by the Authorities all over the country, it was contended.

Form F is not clerical requirement, but a condition precedent for the test

The bench, referring to the contents in Form F, observed that in case any information in the Form is avoided, it will result in the blatant violation of the provisions of Section 4 and may lead to result which is prohibited under Section 6. It observed

"In case the indications and the information are not furnished as provided in the Form 'F' it would amount that condition precedent to undertake the test/procedure is absent. There is no other barometer except Form 'F' to find out why the diagnostic test/procedure was performed. In case such an important information beside others is kept vague or missing from the Form, it would defeat the very purpose of the Act and the safeguards provided thereunder and it would become impossible to check violation of provisions of the Act. It is not the clerical job to fill the form, it is condition precedent for undertaking test/procedure."

The court further observed that filling of Form F is a responsible job of the person who is undertaking such a test i.e., the Gynecologist/ Medical Geneticist/ Radiologist / Pediatrician / Director of the Clinic/Centre/Laboratory to fill the requisite information.

"In case he keeps it vague, he knows fully well that he is violating the provisions of the Act and undertaking the test without existence of the conditions precedent which are mandatory to exist he cannot undertake test/procedure without filling such information in the form. There is no other way to ensure that test is undertaken on fulfilment of the prescribed conditions. There is nothing else but the record which required to be maintained and on the basis of which counter-check can be made. There is no other barometer or criteria to find out the violation of the provisions of the Act. Rule 9(4) also requires that every Genetic Clinic to fill Form 'F' wherein information with regard to details of the patient, referral notes with indication and case papers of the patient are required to be filled and preserved. Form 'F' lays down the indicative list for conducting ultrasonography during pregnancy. Form 'F' being technical in nature gives the insight into the reasons for conducting ultrasonography and incomplete Form 'F' raises the presumption of doubt against the medical practitioner. In the absence of Form 'F', Appropriate Authorities will have no tool to supervise the usage of ultrasound machine and shall not be able to regulate the use of the technique which is the object of the Act."