'Stray Or Intermittent Acts Of Temple Management Will Not Make One A Shebait' : SC Rejects Nirmohi Akhara Claim In Ayodhya 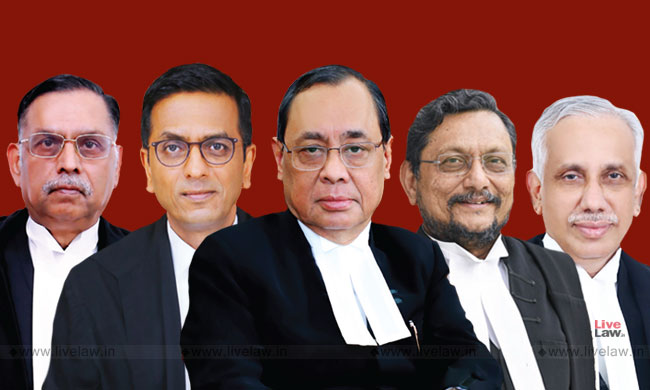 The five judges bench of the Supreme Court in the Ayodhya land title dispute case on Saturday held that thedisputed land belongs to the Hindu deity Ram Lalla and that Nirmohi Akhara is not a shebait of the deity. A shebait/devotee is the one who serves and sustains the deity in the capacity of a manager. The property of the temple is regarded as vesting with the deity who cannot...

The five judges bench of the Supreme Court in the Ayodhya land title dispute case on Saturday held that thedisputed land belongs to the Hindu deity Ram Lalla and that Nirmohi Akhara is not a shebait of the deity.

A shebait/devotee is the one who serves and sustains the deity in the capacity of a manager. The property of the temple is regarded as vesting with the deity who cannot personally take actions required for the benefit and preservation of its property. Thus a shebait is entrusted with its management and is considered to be a human ministrant of the deity.

In their suit, Nirmohi Akhara had claimed to be a shebait of the deity Ram Lalla. They submitted that they were, at all material times, in charge and managed the structure at the disputed site which according to them was a temple, until 29 December 1949, on which date an attachment order under Section 145 of CrPC, 1898 was passed by the District Magistrate, Faizabad.

They argued that they were devotees of Lord Ram, exercising the rights of a shebait since time immemorial and thus sought the shebait rights over the temple, in the capacity of a manager of the deity's property.

In order to determine whether Nirmohi Akhara had established its claim of being a shebait of Lord Ram in the disputed premises, the court assessed its status as a de jure shebait or a de facto shebait.

It is pertinent to note that a shebait may be appointed by the founder of the endowment by way of an express deed of dedication conferring shebaiti rights. In its absence however, the law has ensured the protection of the properties of the idol by the recognition of a de facto shebait.

"Where a person is in complete and continuous management of the deity's affairs coupled with long, exclusive and uninterrupted possession of the appurtenant property, such a person may be recognised as a shebait despite the absence of a legal title to the rights of a shebait," the court said.

Since Nirmohi Akhara did not have an express deed of dedication conferring shebaiti rights on it, the court said,

"…there is a positive burden on it to demonstrate that it was in fact a shebait of the idols. For this reason, the Nirmohi Akhara must establish, on the basis of oral and documentary evidence, that they have exercised all the rights required to be recognised as de facto shebaits."

However, Akhara failed to establish that it had been exercising the rights of a shebait since time immemorial. The bench was of the opinion that the oral evidence submitted by Akhara did not establish a cogent account of the activities undertaken by it at the disputed site.

It was held that witnesses who supported Akhara's claims as a shebait contradicted their own statements and admitted to not having read their own affidavits. The witnesses had merely signed the relevant documents without even understanding the testimony contained therein.

The court said that the oral testimony relied on by Nirmohi Akhara, at best, established that they were present in and around the disputed site and such stray acts could not constitute sufficient evidence to establish continuous, exclusive and uninterrupted exercise by Nirmohi Akhara of the rights and duties of a de facto shebait. Even the documentary evidence produced by them did not show that they were managing the property in question.

"A fugitive or isolated act of a person with regard to the property of a religious endowment would not make him a de facto trustee. One swallow does not make a summer. There must be a continuous course of conduct, the length of the same depending on the facts and circumstances of the case."

In this light the Supreme Court said,

"A claim of rights as a de facto shebait must be substantiated with proof that person is in exclusive possession of the trust property and exercises complete control over the right of management of the properties without any let or hindrance from any quarters whatsoever. For all practical purposes, this person is recognised as the person in charge of the trust properties. Though it cannot and has not been denied in the present proceedings that Nirmohi Akhara existed at the disputed site, the claim of Nirmohi Akhara, taken at the highest is that of an intermittent exercise of certain management rights. Their rights were peripheral, usually involving the assistance of pilgrims, and were constantly contested. As held above, a stray or intermittent exercise of management rights does not confer upon a claimant the position in law of a de facto shebait. It cannot be said that the acts of Nirmohi Akhara satisfy the legal standard of management and charge that is exclusive, uninterrupted and continuous over a sufficient period of time. Despite their undisputed presence at the disputed site, for the reasons outlined above, Nirmohi Akhara is not a shebait."

The bench also held that the Allahabad High Court was misplaced in decreeing the suit before it by declaring that all the three sets of parties, Muslims, Hindus and Nirmohi Akhara, are joint holders of the disputed premises and by allotting a one third share to each of them.

"the claim by the Nirmohi Akhara was as a shebait who claimed a decree for management and charge. On its own case, Nirmohi Akhara could not have been granted an independent share of the land," the court said.

Considerably, Akhara's suit was also held to be barred by limitation. The entire case of Nirmohi Akhara was of the deprivation of its shebaiti rights by the Magistrate's order under Section 145 of CrPC, passed on 29 December 1949. Akhara claimed that the cause of action arose on 5 January 1950 when the government receiver took charge and made an inventory of the attached items.

The court held that after the Magistrate's order for attachment of property, nothing prevented Nirmohi Akhara from filing a declaratory suit for possession and title.

However, the Suit was filed by them on 17 December 1959, for restoration of management and charge so as to enable the Akhara to have the benefit of the usufruct in the discharge of its obligations towards the deity. Thus, they would be governed by the provisions of Article 120, the residuary article in the Limitation Act, 1908, which prescribes the period of limitation as six years.

Clearly, the suit was filed after a lapse of almost 10 years and hence, it was held to be outside the prescribed period of limitation.

However, having regard to the historical presence of Nirmohi Akhara at the disputed site and their role, the Court took recourse to its power under Article 142 to do complete justice and directed that Akhara be empanelled and given an appropriate role in the management in framing the scheme for establishment of the temple, by the Central Government.