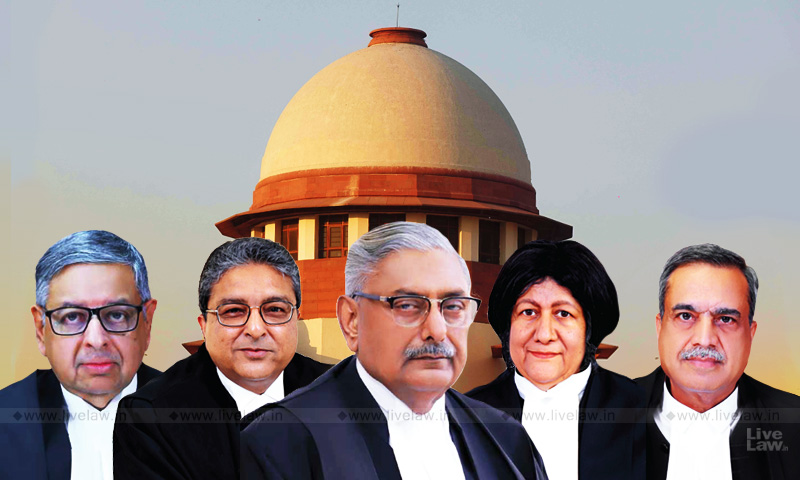 The Supreme 5-judge Bench headed by Justice Arun Mishra on Thursday reserved its judgment on whether in schools in Scheduled Areas, 100 % reservation in the posts of teachers can be made in favour of members of Scheduled Tribes.

"Your Lordships asked a very important question, a question which teases economists across the world- Trickle-down! I think it can be answered with the 'bottoms-up approach'. Why are you looking at if the benefits are trickling down? How about looking at the people who are able to take advantage (of the welfare measures)?", submitted Senior Advocate Rajeev Dhawan, for the state of AP.

"I have three suggestions in this regard- one, empower the gram sabhas and the panchayats to ensure the implementation of the welfare measures. This is the secret of the PESA. It empowers the gram sabhas and not just the Panchayats...two, give information under the RTI that in this village, this is what you are entitled to receive and this is the allocation which has been misspent or not spent. This is what Aruna Roy and Arvind Kejriwal did in rural areas in Rajasthan and in Delhi that got them the Magsaysay Award..."

"Are we on freebies?", asked Justice Mishra.

"I hope not! I am on empowerment...freebies are a part of trickle-down...if you divest the State of its functions, then the State does nothing. That is what happened with Obama Care", responded Dr. Dhawan.

"And thirdly, secure implementation. Are you saying you will improve the economy and everything will trickle down? No!", he continued.

He relied on a 2017 order of a two-judge bench of the Rajasthan High Court by which the interim stay on 100% reservation in favour of the ST in recruitment to the posts of Teacher and Junior Accountant was vacated and the state government was allowed to proceed in holding the selections. It was clarified that the selection shall be subject to the final disposal of the matter by the High Court, upon receiving the decision of the apex court in the reference at hand.

Finally, Dr. Dhawan prayed that the SLP be dismissed, or in the alternative, the appointments which have already been made not be reversed. "And in extension to the first prayer, since Your Lordships are having discomfiture, you may direct the state and the Governor to maintain oversight so that future appointments are not invalidated", he concluded.

Next, Advocate Shivam Singh, also for the respondents, relied on Article 41 (Right to work, to education and to public assistance in certain cases) and 46 (Promotion of educational and economic interests of Scheduled Castes, Scheduled Tribes and other weaker sections) of the Constitution.

"41 and 46 are a fact. But the Fifth Schedule is the enabling power. Can in exercise of that, one override Indira Sawhney (which stipulated the 50% upper-limit on reservation)? That is what we are testing", noted Justice Anirudhha Bose.

"What is the mandate of 46? This is not just for the SC/ST. Even if this power can be exercised, what about the upper-classes in a similar position? This mandate is not lop-sided. The mandate is towards all, not in isolation. In the case of special areas, can we ignore other exploited sections?...take a situation where 40-50% of the population is tribal, then what about the other classes (if 100% reservation is granted)? Also, if few districts are given 100% reservation, it would be damaging to the tribals of other districts also", reflected Justice Mishra.

When Singh sought to argue that the students in schools in Scheduled Areas are all members of the ST and hence, their educational needs are satisfied better if the teachers also hail from the same class, the bench demanded,

"It means that children of other communities are not allowed to study in these schools? Under what law?".

On Wednesday, Justice Vineet Saran had called this argument out as unconstitutional.

"The distinction has to be 'protective', not 'exclusive'", Justice Mishra had opined.

Singh advanced that as per a study conducted in a district, 100% reservation had brought about a manifold rise in education.

"So this could not have happened if the teachers happened to be of some other caste?'", questioned the bench.

"To preserve the culture of a particular tribe, you need to have a teacher of the same tribe?", asked Justice Saran to Senior Counsel R. Venkataramani, also for the state of AP.

"There are several other factors also- who would be available to teach, no absenteeism, teacher-student relationship...", replied the Senior Advocate.

"Is this confined to the tribals and the SC only?", pressed Justice Mishra.

"This is the only way contemplated to uplift tribals?", continued the judge.

"This is not a case of reservation at all! It is a case of using whatever tools are available to uplift the educational interests of the ST!...Legitimate means to usher in betterment of the weaker sections", asserted Mr. Venkataramani.

"How is it not a case of reservation? I can't understand at all. You are saying 14 and 16 are out? Where is the law under 371D that 14 and 16 don't apply?...There is no decision also. The Governor's notification (making 100% reservation) is not a decision...reservation is always examined under 14, 15, 16. We definitely want to examine your new submission that it is not a case of reservation...and what are these legitimate methods? Legitimacy is the only issue!", observed Justice Mishra.

"Legitimacy is in the Governor's decision which is based on the experience of the people in Scheduled Areas", responded Mr. Venkataramani.

At this point, Dr. Dhawan drew the bench's attention to G.O. No. 3, dated 10-1-2000, where it was directed that the posts of teachers in the Schools in the Scheduled Areas in the state shall be filled in by the local Scheduled Tribe candidates only out of whom 33 1/3% shall be women.

"For the purpose of this notification, the 'Local Scheduled Tribe Candidate' means, the candidate belonging to the Scheduled Tribes notified as such under Article 342 of the Constitution of India and the candidates themselves or their parents have been continuously residing in the Scheduled Areas of the Districts in which they are residents till to date since the 26th January, 1950", he quoted.

"I am on legitimacy. The methods are explained in the G.O (he read the contents of the notification)...Was this a thoughtful decision taken at all levels under Schedule V? Yes. And we when we are dealing with primary, secondary schools, the reservation in favour of women is in tune with Article 15(3)", he expounded.

"What is the meaning of local area?", questioned Justice Mishra.

"When the RTE was introduced, local area was to mean community area. Here, it means the area where certain people live and their forefathers have also lived", answered Dr. Dhawan.

"Whether district-wise reservation is permissible is another question...", ventured Justice Mishra.

After the rejoinder arguments, the judgment was reserved.