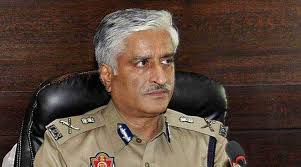 Supreme Court on Tuesday granted interim protection from arrest to former Director General of Police in Punjab Sumedh Singh Saini, who is an accused in the 1991 Balwant Singh Multani kidnapping and murder case. The Court has issued notice in the anticipatory bail plea filed by him.Sumedh A Bench headed by Justice Ashok Bhushan, and comprising of Justices R. Subhash Reddy and MR...

Supreme Court on Tuesday granted interim protection from arrest to former Director General of Police in Punjab Sumedh Singh Saini, who is an accused in the 1991 Balwant Singh Multani kidnapping and murder case.

The Court has issued notice in the anticipatory bail plea filed by him.

Sumedh A Bench headed by Justice Ashok Bhushan, and comprising of Justices R. Subhash Reddy and MR Shah, heard the arguments in the plea filed by Saini which challenges the September 7 orderof the Punjab and Haryana High Court wherein his anticipatory bail plea was dismissed, and proceeded to direct for no arrest till a Reply is filed by the State within a period of 3 weeks.

Rejoinder is to be filed thereafter within one week. Saini has been directed to cooperate with the police authorities.

Today, Senior Advocate Mukul Rohatgi, appearing on behalf of Saini, submitted to the Court that it was a very serious matter and explained the chain of events.

"My client rose from the ranks and became the DGP. He was a decorated officer and was present in the thick of the militancy in the State of Punjab. He had even suffered 5 bullet injuries!", submitted Rohatgi.

Rohatgi then posited that Multani's father had filed a habeas corpus after Multani had escaped from jail. This had been rejected as the State had submitted that he was a proclaimed offender.

"The Court had entertained an IA by the father of Multani to find what happened to this son. The district judge started hearing the matter in a plea which had already been disposed of, and the State Government appealed this. It was then held by the Supreme Court that the judge had no fresh material on the basis of which CBI probe had been ordered. Thus, it was quashed", continued Rohatgi.

Rohatgi raised the issue of the plea being entertained on the same subject matter, especially after 10 years of delay from the Supreme Court decision. He further referred to how it had been 29 years since Multani had escaped and the son had filed an FIR, despite being aware of the judgement of the Apex Court.

"One district judge has recalled the other of another district judgement. Can that be ndone. It was even noted that the bail had been granted at a nascent stage. Is 30 years a nascent age?", stated Rohatgi.

Rohatgi then went on to aver that the government was after Saini because he had filed two chargesheets against the Captain Amarinder Singh, Chief Minister of Punjab.

Senior Advocate Sidharth Luthra then commenced his submissions and stated that it was unfortunate that Rohatgi was attributing a motive to the judge.

"I will make submissions on the 2011 verdict. There is a man called Multani who had been picked up from his resident. Statement had been recorded after registration of FIR. There were witnesses in the police station who have for the first time stated that the picture of Multani was not Multani at all. The HC judge also noted that the man used to intimidate and that a person had succumbed to injury after he was inhumanly treated by the Applicant", submitted Luthra.

Luthra concluded by noting that the Applicant had the audacity and power to have files under his control, even after his retirement.

Senior Advocate KV Vishwanathan, appearing for Multani's brother, then submitted to the Court that Multani's father had approached the High Court as Supreme Court had kept the option open and, as a legal heir, he was present in Court.

Vishwanathan referred to the Sushila Aggrawal case and submitted that arrest could be made if anticipatory bail was rejected.

The Bench noted the submissions and issued notice in the matter.

Saini had moved the Supreme Court to avoid his imminent arrest after the Punjab and Haryana High Court had dismissed his anticipatory bail on September 7. A caveat has had been filed by Punjab Police to pre-empt Saini from getting any ex-parte relief from the Court.