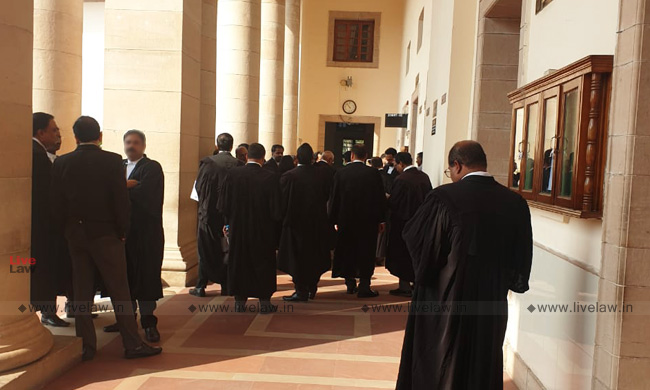 In a show of solidarity with Advocate Reepak Kansal who had been imposed with a cost of Rs. 100 for filing a plea alleging bias by the Top Court's Registry, lawyers have initiated a Symbolic Protest by earmarking a deposit of the same in denomination of 50 Paise coins.While dismissing a petition alleging alleging adoption of a "pick and choose" policy by its Registry and of routinely...

In a show of solidarity with Advocate Reepak Kansal who had been imposed with a cost of Rs. 100 for filing a plea alleging bias by the Top Court's Registry, lawyers have initiated a Symbolic Protest by earmarking a deposit of the same in denomination of 50 Paise coins.

While dismissing a petition alleging alleging adoption of a "pick and choose" policy by its Registry and of routinely giving preference to influential advocates in listings, a bench headed by Justice Arun Mishra imposed a fine of Rs 100 on him for filing the plea in which he had sought seeking a direction to its Secretary General & Registrar/officers in "not to give preferences to cases filed by influential lawyers/petitioners".

Speaking to Live Law, Advocate Kansal said, "I am happy that Lawyer's are supporting me in this cause and the issue raised has dawned a spirit of  solidarity and commonality"

Kansal had argued that the Section officers and/or Registry of Supreme Court routinely gave preferences to some law firms and influential advocates for reasons "best known to them".

"This is discrimination and against equal opportunity to get justice in this Hon'ble Court", he said.

A Whatsapp group of Lawyers, brewing with a drive to collect 200 denominations of 50 paise coins was recently formed after the aforementioned judgement in order to submit the same to the registry as a mark of "symbolic protest".

When the 200 coins will be collected, they will be deposited in the Registry.

The Top Court had observed that the practice of blaming the Registry had become widespread and that "such evil is also spreading in the various High Courts". The bench had observed that "Registry is blamed unnecessarily for no good reasons". Noting that Kansal's allegations were baseless and reckless, the court stated that the practice was "evil", bestowed upon the Registry which was part and parcel of the Judicial dispensation system.

"To err is human, as many petitions are filed with defects, and defects are not cured for years together. A large number of such cases were listed in the recent past before the Court for removal of defects which were pending for years. In such situation, when the pandemic is going on, baseless and reckless allegations are made against the Registry of this Court, which is part and parcel of the judicial system. We take judicial notice of the fact that such evil is also spreading in the various High Courts, and Registry is blamed unnecessarily for no good reasons".- Supreme Court

The Court said that a large number of petitions are filed which are defective; still, the insistence is made to list them and mention is made that they should be listed urgently.

"It happens in a large number of matters, and unnecessary pressure is put upon the Assistants dealing with the cases. We find due to mistakes/ carelessness when petitions with defects are filed, it should not be expected that they should be listed instantly. To err is human and there can be an error on the part of the Dealing Assistants too. This is too much to expect perfection from them, particularly when they are working to their maximum capacity even during the pandemic. The cases are being listed. It could not be said that there was an inordinate delay in listing the matters in view of the defects."

The bench comprising Justices Arun Mishra and Abdul Nazeer had heard this petition on 19th June.

It took serious objections to the allegations raised by Advocate Reepak Kansal, who complained that the SC Registry was showing discrimination and undue preferences in the matter of listing of all cases.

"How can you compare your Petition on One Nation One Ration Card to the plea of Arnab Goswami? What was the urgency? Why are you saying nonsensical things? All members of registry work day and night to make your life easier. You are demoralising them. How can you say such things?", the bench made these oral observations during the hearing.