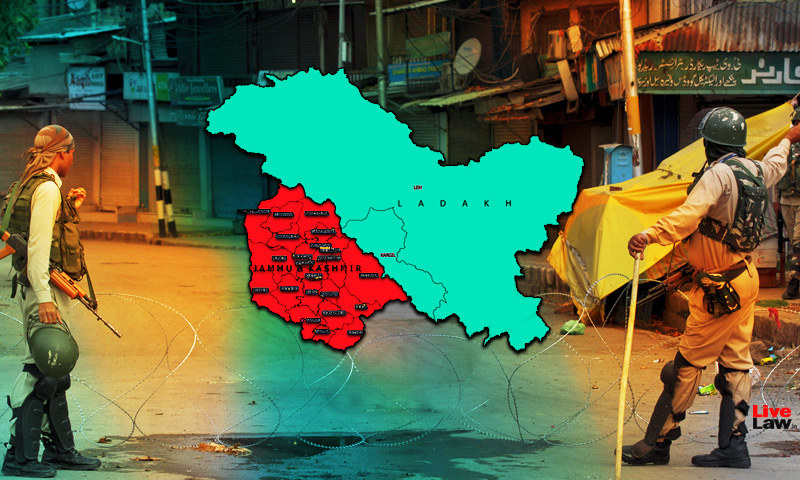 The Jammu and Kashmir High Court Bar Association, Srinagar has written to the Chief Justice India, highlighting various problems that are being faced by its members ever since abrogation of Article 370 of the Constitution, last year. Disposal of Habeas Corpus Petitions The Association has informed the CJI that since August 6, 2019, i.e. after the Abrogation of Article 370, more...

The Jammu and Kashmir High Court Bar Association, Srinagar has written to the Chief Justice India, highlighting various problems that are being faced by its members ever since abrogation of Article 370 of the Constitution, last year.

The Association has informed the CJI that since August 6, 2019, i.e. after the Abrogation of Article 370, more than 600 habeas corpus petitions have been filed before the High Court of UT of J&K at Srinagar. However till date, not even 1% of such cases have been decided by the J&K High Court.

Citing an example the Association said, the habeas corpus petition of the President of the Bar Association, Mian Abdul Qayoom, alone took 9 months for disposal. The matter is now pending before the Supreme Court.

Similarly, it has been pointed out that petitions filed in August/ September, 2019, are yet to be heard by the High Court.

The Association has asserted that the primary reason behind such delay in disposal is that no direction has been given by the High Court Chief Justice, asking the Registrar Judicial to list these HCPs before every Judge irrespective of their daily roster, so that the petitions are decided within 14 days as per the High Court Rules.

It is alleged that the Executive Committee of the HCBA ventilated these grievances on behalf of its members before High Court Chief Justice Gita Mittal however, no concrete steps were taken for resolving their problems.

The letter states that because of restrictions of operation of 4G in the J&K valley, it has become very difficult for lawyers to argue matters through virtual mode, though an option is given to the counsel to appear before the Court. The lawyers whose cases are listed are allowed to enter the court premises but their clerks and juniors are not allowed disabling the lawyers to assist the courts properly, the letter states.

Significantly, the issue of restoration of 4G speed internet services has already been heard by the Supreme Court at length. Vide order dated May 10, 2020, the court refrained itself from passing any positive directions and instead, directed the Centre to constitute a "Special Committee" to examine the issue.

Meanwhile, the Central Government passed another order, extending the restrictions on internet speed in the Union Territory of Jammu and Kashmir till July 8, 2020.

The Association has also taken exception to transfer of service matters, pending before the Srinagar Bench of the J&K High Court, to the newly established CAT, Jammu.

"After the Abrogation of Article 370, all the Service Writ Petitions stand transferred to The Central Administration Tribunal, Jammu from the Srinagar Wing of the Hon'ble High Court, were nearly 45000 Service Writ Petitions were pending alongwith Misc. Applications. Despite the fact that on 28.05.2020 Ministry of Personal and Public Grievance and Pensions issued a notification No. 317E that the Central Govt. specifies Jammu and Srinagar as the places at which the Benches of CAT shall ordinarily sit for the Union Territory of J&K and UT of Ladakh. On 28.05.2020 another notification no. 318E was issued that the Jammu Bench would have the justification over UT of J&K and UT of Ladakh. Accordingly, the cases of Srinagar Bench are not being taken up nor the Bench has held a single sitting in Srinagar since the date of said notification. Not only the lawyers but public at large particularly the litigants whose cases stand transferred to the CAT suffer because their cases cannot be heard by Hon'ble High Court," the letter states.