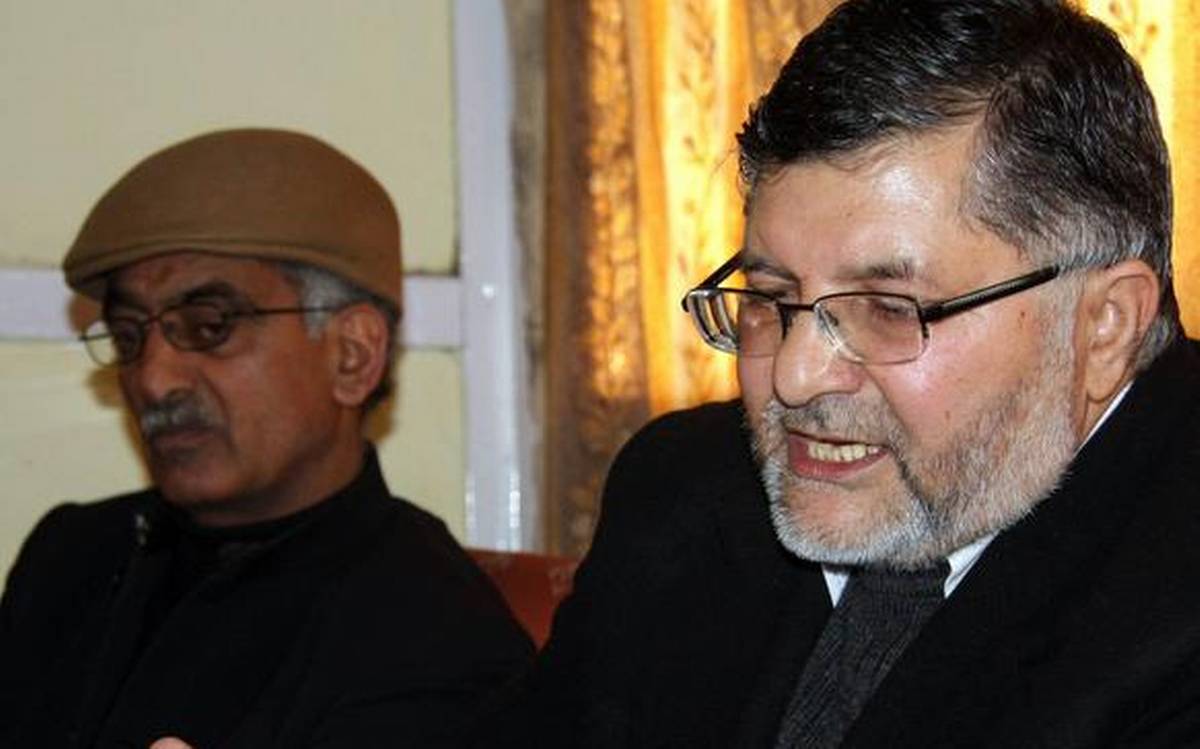 The court has held that the 70-year old detenue has a "tendency" of disturbing law and order and thus, it will not be appropriate to interfere with the impugned order of detention.

The Court observed that he had an ideology like a "live volcano".

"Having considered the matter, we may say that an ideology of the nature reflected in the FIRs and alleged against the detenue herein is like a live volcano. The ideology has always an inclination, a natural tendency to behave in a particular way It is often associated with an intense, natural inclination and preference of the person to behave in the way his ideology drives him to achieve his latent and expressed objectives and when he happens to head or leading a group, as the allegations contained in the FIRs suggest, his single point agenda remains that his ideology is imbued in all those whom he leads. Depending upon the nature of the ideology one has, he can have short term, continuous and long term objectives and strategies".

"An ideology that has the effect and potential of nurturing a tendency of disturbance in public order, such as is reflected in the FIRs registered against the detenue in the instant case, and of which the detaining authority is reasonably satisfied, can be said to be different from a criminal act or acts done sometime in the past and, therefore, would always continue to be proximate in their impact and consequence," the order states.

The order has been passed by a Division Bench comprising of Justice Ali Mohammad Magrey and Justice Vinod Chatterji Koul, in a Letters Patent Appeal against the February 7 order of the single bench, whereby the habeas corpus petition challenging Qayoom's detention was dismissed.

Qayoom has been under detention since August 5, when the Central Government took measures to abrogate the special status of J&K under Article 370 of the Constitution of India. In this appeal, the following grounds (in bold) were taken by Qayoom, which stand adjudicated as below:

On this issue the court held that even a solitary ground was sufficient to sustain the detention order and thus, merely because detenue was not supplied all the materials on the basis of which the detaining authority had derived the requisite satisfaction would not affect the detention order.

The court then observed that most of the grounds considered by the detaining authority were "somewhat clumsy" however it held that the same would not affect the detention order since the authority had recorded its "satisfaction" on a number of grounds.

Emphasizing on one such ground the court held,

"in one of the grounds of detention, quoted separately hereinabove, the detaining authority has exclusively considered the four FIRs registered against the detenue, and expressed his satisfaction therein on the basis of such FIRs, independent of the other materials referred to by him in other grounds of detention. In that view of the matter, in terms of Section 10-A(a) of the JK PSA, the detaining authority shall be deemed to have made the impugned order of detention after being satisfied with reference to the aforesaid ground of detention. So the detention order on that ground would sustain."

Section 10-A(a) of the JK PSA provides that where a person has been detained under the PSA Act on the basis of two or more grounds, such order of detention shall be deemed to have been made separately on each of such grounds and will not be deemed to be invalid or inoperative merely because one of some of the grounds is or are vague, etc.

Going by the aforesaid provision the court said,

Declining this argument, the court noted that two of the four FIRs as mentioned above related to processions taken out by the members of the Srinagar Bar Association lead by the detenue, allegedly leading to violation of order issued under Section 144 CrPC.

Thus, finding "continued propensity" of the detenue of indulging in activities that are fundamentally prejudicial to the maintenance of public order the bench remarked,

"In the instant case, the detaining authority has mentioned that the detenue has been articulating in public through his speeches and appeals his ideology and has allowed using the platform of the Bar Association for propagating secessionist ideology which in turn has been working fundamentally prejudicial to the maintenance of public order.

The FIRs and the allegations contained therein have a live link to the satisfaction arrived at by the detaining authority and they have the required proximity to have lend a suspicion to the detaining authority that, if not detained, the detenue may act in a manner as would be prejudicial to the maintenance of public order, especially so because of the 'surrounding circumstances' prevailing then."

Rejecting this argument the court reiterated that it is not that the detenue had been detained only on the very same FIRs and the allegations contained therein. In fact, the bench clarified,

"we have gone through intelligence reports which contain materials after 2010 depicting the activities of the detenue on the basis of which as well the detaining authority has shown to have arrived at his satisfaction reflected in the impugned detention order. These reports could be well said to constitute new facts."

The court then went on to observe that a person's ideology inspires "natural tendency to behave in a particular way," to achieve short term, continuous and long term objectives and strategies.

In the present case the bench said, the detenue's ideology, as reflected in the FIRs is like a "live volcano".

"So far as the ideology attributed in the FIRs is concerned, public disorder is its primary object and surviving factor. Taking out processions knowingly that such acts are likely to stoke public disorder, especially so when there are restrictions in position, raising provocative and antinational slogans of sorts, holding close door meetings within separatist leaders as being President of the Bar etc. etc. are such instances which point to only one thing that the ideology is not an act done by the detenue in the past, but it is his continuous inclination and preference," the bench held.

Argument that the grounds of detention are the reproduction of the Police Dossier verbatim, suggesting that the detaining authority did not apply his mind and, therefore, the detention order suffers from non-application of mind and, hence, is vitiated

While taking this ground, the detenue had relied upon the Supreme Court's judgment in Rajesh Vashdev Adnani v. State of Maharashtra, (2005) 8 SCC 390, whereby a detention order was set aside for having been copied and for non-application of mind.

Distinguishing the present case from the said precedent however the bench observed,

"True there is a resemblance in contents of the grounds of detention and the police dossier submitted before the detaining authority, but the detaining authority in the impugned order has clearly stated that after perusal of the records submitted by the Senior Superintendent of Police and after applying his mind carefully and having regard to the requirements of law, he was satisfied that with a view to preventing the detenue from acting in any manner prejudicial to the maintenance of public order, it was necessary to detain him under the J&K PSA."

In the aforesaid precedent, the bench noted, the order of detention did not record such a satisfaction.

Argument that since the detaining authority did not convey to the detenue that he could make representation to him until the order was approved by the State Government within 12 days of its passing, specifying the time limit for the said purpose, the detention order is vitiated

The court rejected this argument as it observed that "the detenue had been duly intimated that he could make representations against the order of detention to the detaining authority as well as to the Government, if he wished." The bench further noted that apparently, the detenue did not wish to avail that right inasmuch as he had also not opted to be heard in person by the Advisory Board.

The court went on to hold that even if it is presumed that the detenue was not informed of such right to representation, the same would not vitiate the case as the detenue was a long standing member of the Bar and hence, he would be well aware of his rights.

"Here the detenue is a practicing lawyer, as per the appellant-petitioner, having more than 40 years of impressive standing and practice at the Bar and President of the Bar Association since long. It could not be comprehended that he was oblivious of the period within which he could make a representation to the detaining authority, if such an occasion would have arisen. When the detenue happens to be of the stature and knowledge of the likeness of the detenue herein, and he does not make a representation, legally an inference is available that he had deliberately not done so, to claim violation of his right in this behalf in his habeas corpus petition. Such tactics cannot be allowed to be played," the court said.

Argument that the extensions accorded in the detention order of the detenue are not covered by the provisions of the Act; therefore, the same are illegal

In this ground the detenue had argued that the Government has the power to detain a person for such period as it may think fit, upto a maximum of twelve months (Qayoom's detention order was initially passed for a period of three months).

Once such detention is ordered for a period less than twelve months, the power to extend the period of detention is exercisable only under sub-section (2) of Section 18, not under Section 18(1)(a) and, the said power to extend is exercisable only vis-à-vis a foreigner, not a citizen of the UT. On this count, the extension orders were accorded to have no backing of law.

Rejecting this argument the court observed,

"The initial detention order passed after the receipt of the opinion of the Advisory Board specifically mentioned that the detenue be detained for a period of three months 'in the first instance'. The phrase 'ín the first instance' means 'as the first thing in a series of actions'; meaning thereby, the Government had reserved to itself the power to pass a series of such orders under Section 18(1)(a) to make the total period of detention twelve months, if it so desired. The orders of extension make it clear that the same have been passed in exercise of the powers under Section 18(1)(a), not under Section 18(2). Reference to sub-section (2) of Section 18 by the learned senior counsel is misplaced. The learned senior counsel also seems to ignore the cardinal principle of law that one who has power to do a thing, has the power to modify, alter or revoke it."

Argument that the activities attributed to the detenue in the allegations contained in the FIRs against the detenue do not fall within the definition of the phrase 'acting in any manner prejudicial to the maintenance of public order'; hence the detention order is unfounded

Refuting this argument the court remarked,

"The learned senior counsel seems to be forgetting that there is an unambiguous allegation contained in the FIRs that he had lead processions of angry mobs of lawyers, least minding about imposition of restrictions 49 under Section 144 Cr. P. C… if a person intentionally, wilfully, deliberately and purposefully breaks and violates such a restriction, it would connote nothing less than using force and acting in a manner prejudicial to the interests of maintenance of public order. In that view of the matter, the argument of the learned senior counsel fails."

In view of the above findings, the LPA was dismissed.