Better internet facilities are desirable during a global pandemic and a national lockdown, but the concerns of cross-border terrorism cannot be ignored, observed the Supreme Court while disposing of three writ petitions seeking restoration of 4G internet services in Jammu and Kashmir."While it might be desirable and convenient to have better internet in the present circumstances, wherein...

Better internet facilities are desirable during a global pandemic and a national lockdown, but the concerns of cross-border terrorism cannot be ignored, observed the Supreme Court while disposing of three writ petitions seeking restoration of 4G internet services in Jammu and Kashmir.

"While it might be desirable and convenient to have better internet in the present circumstances, wherein there is a worldwide pandemic and a national lockdown. However, the fact that outside forces are trying to infiltrate the borders and destabilize the integrity of the nation, as well as cause incidents resulting in the death of innocent citizens and security forces every day cannot be ignored", the Court observed.

A bench comprising Justices N V Ramana, R Subhash Reddy and B R Gavai directed the constitution of a Special Committee comprising Secretaries of Union Ministries of Home Affiars & Communications and the Chief Secretary of Jammu and Kashmir to examine the contentions and suggestions of the Petitioners as well as the Respondents.

"The aforesaid Committee must also examine the appropriateness of the alternatives suggested by the Petitioners, regarding limiting the restrictions to those areas where it is necessary and the allowing of faster internet (3G or 4G) on a trial basis over certain geographical areas and advise the Respondent No. 1 regarding the same, in terms of our earlier directions", added the bench disposing of the petitions were filed by Foundation For Media Professionals, Private Schools Association of J&K and Soayib Qureshi.

Fundamental Rights to be balanced against national security.

The bench observed that the fundamental rights of citizens need to be balanced with national security concerns, when the situation so demand. The present situation called for a "delicate balancing", considering the special circumstances of J&K.

The bench referred to its January 10 judgment in the Anuradha Bhasin case, which directed the administration to review the restrictions applying the "principle of proportionality".

Following that, the administrations has been passing several orders, periodically easing the restrictions in a phased manner, noted the bench.

The bench also noted the that since 05.08.2019, around 108 terrorist related incidents have taken place in Union Territory of Jammu and Kashmir, wherein 99 incidents were  reported from the Kashmir province and 09 from Jammu province.

The judgment also included a chart containing details of terrorist incidents which took place in the region between April 26 and May 5. 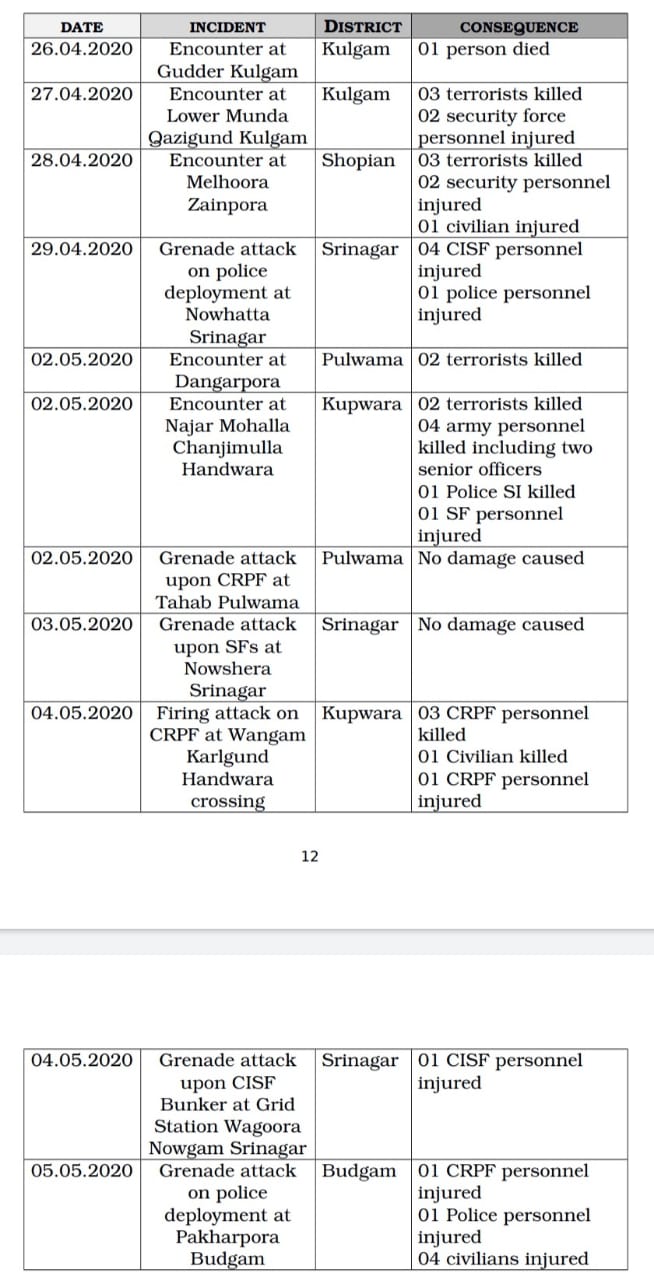 The administration stated that speed restrictions are necessary to restrict the flow of information in order to prevent misuse of data by terrorists and their supporters.

In this connection, the bench observed that the administration has not specified reasons for making them applicable to the entire Union Territory instead of confining it to problematic areas. At the same time, the bench reiterated that it acknowledged the concerns of cross-border terrorism.

"Although the present orders indicate that they have been passed for a limited period of time, the order does not provide any reasons to reflect that all the districts of the Union Territory of Jammu and Kashmir require the imposition of such restrictions. At the same time, we do recognize that the Union Territory of Jammu and Kashmir has been plagued with militancy, which is required to be taken into consideration.

In this regard, our attention is drawn to the fact that blanket orders have been passed for the entire territory rather than for specific affected areas.

A perusal of the submissions made before us and the material placed on record indicate that the submissions of the Petitioners, in normal circumstances, merit consideration. However, the compelling circumstances of cross border terrorism in the Union Territory of Jammu and Kashmir, at present, cannot be ignored"

At the same time, the Court added that it is also cognizant of "the concerns relating to the ongoing pandemic and the hardships that may be faced by the citizens".

The petitioners contended that speed restriction on internet in the region amidst the COVID-19 pandemic resulted in disproportionate infringement of the right to access internet. As a result of the speed curbs, doctors were finding it difficult to render online medical services. Online education has also been disrupted due to the speed limits, the petitioners added.

Lack of 4G net made right to internet illusory and dismantled the fundamental rights to access health services and education, they contended.