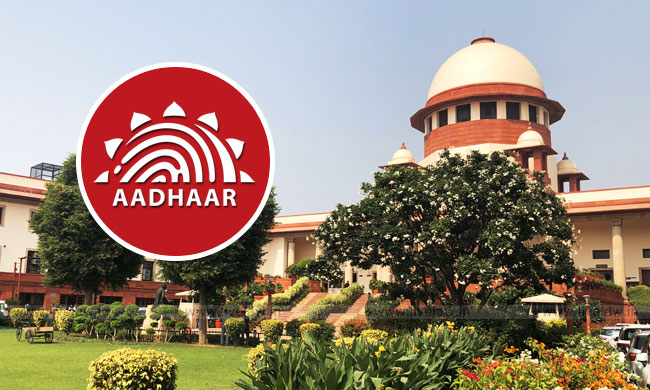 Two review petitioners in the Aadhaar case has filed an application seeking open court hearing of the case.

The application has referred to the observations made by the Constitution Bench in the case Rojer Mathew v South Indian Bank, doubting the correctness of the Constitution Bench judgment delivered on September 27, 2018, which had held that there was nothing wrong in passing Aadhaar (Targeted Delivery of Financial and other subsidies, benefits and services) Act 2016 as a 'money bill'.

This view was doubted by the 5-judge bench in Rojer Mathew case on November 13, 2019, observing that "majority dictum in K.S. Puttaswamy (Aadhaar-5) did not substantially discuss the effect of the word 'only' in Article 110(1) of the Constitution"

Also, reliance is placed on the holding of the 9-judge bench in the Sabarimala reference that questions of law can be referred to larger bench in review petitions.

On these grounds the petitioners, Shanta Sinha and another, seek open court hearing of the review.

The review petitions are listed before a bench comprising CJI S A Bobde, Justices AM Khanwilkar, D Y Chandrachud, Ashok Bhushan and L Nageshwara Rao on June 9. Justices Ashok Bhushan, Khanwilkar and Chandrachud were present in the original Aadhaar judgment.

On September 27, 2018, the Constitution Bench had upheld, by 4:1 majority, the constitutionality of Aaadhar Act 2016, with Justice Chandrachud dissenting.

On the question of it being passed as money bill, the majority upheld the contention of the Central Government that a bill can be characterized as 'money bill' if it incidentally covers the aspects mentioned in clauses (a) to (g) of Article 110(1) of the Constitution. The Centre contended that the Aadhaar Act has a bearing on the expenses drawn on the Consolidated Fund of India, as it is seeking to ensure that subsidies are targeted at authenticated persons.

In Rojer Mathew, while considering the correctness of including provisions affecting composition of Tribunals in the Finance Act, 2017 (which is a money bill), the CB doubted the view in Aadhaar case that a bill can be treated as money bill if it incidentally covers the subjects under Article 110.