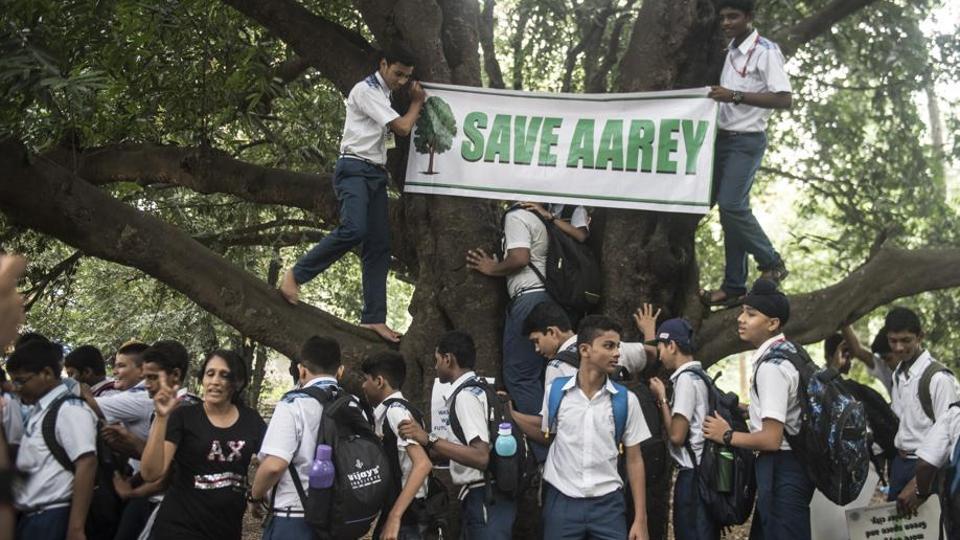 The special vacation bench of the Supreme Court on Monday ordered status quo on felling of trees in Aarey colony in Mumbai suburbs till further orders.This was after Solicitor General Tushar Mehta, appearing for Maharashtra Government, undertook that no further trees will be cut and that the legality of the tree felling which already took place can be decided by the environment bench after...

The special vacation bench of the Supreme Court on Monday ordered status quo on felling of trees in Aarey colony in Mumbai suburbs till further orders.

This was after Solicitor General Tushar Mehta, appearing for Maharashtra Government, undertook that no further trees will be cut and that the legality of the tree felling which already took place can be decided by the environment bench after the Dusshera vacation.

"Whatever has to be cut is cut, there won't be further cutting", the Solicitor General said.

The Court has also directed the release of all environmental activists detained over protests against tree cutting. The matter will be next heard on October 21.

The two-judge bench of Justices Arun Mishra and Ashok Bhushan was constituted after a group of law students wrote to Chief Justice Ranjan Gogoi seeking the apex court's urgent intervention to stop the cutting of trees in Aarey colony. This comes a day after the Bombay High Court rejected an application moved by environmentalists seeking a stay on the cutting of trees.

Senior Advocates Sanjay Hegde and Gopal Shankaranarayanan appeared for the students and activists respectively. They submitted that the issue whether Aarey is a forest or not is pending in the Supreme Court. The NGT is considering the issue whether the area is eco sensitive zone. Therefore, the authorities should have refrained from cutting down trees pending decision.

The Chief Justice of Bombay High Court had orally observed on Friday that he hoped that authorities will not start cutting the trees before the petitioners moved the Supreme Court, the petitioners submitted.

The Court said that the decision taken by the Urban Development Department to reserve the area for metro car shed (as per notifications issued on 24th August 2017 and 9th November 2017) were challenged in the Bombay High Court in a previous case.  The challenge was not entertained by the division bench then. That division bench in its judgment given on October 26, 2018 noted that there was nothing on record to show that the land was a forest.  The SLP against that judgment is pending in Supreme Court. Also, another case is pending in the National Green Tribunal seeking declaration of the area as forest and challenging the exclusion of the region from notification for eco sensitive zones issued by the Union Ministry of Environment of Forests in 2016.

In this back drop, the High Court in its October 4 decision held that the petitions cannot be entertained as the issue was already decided by an earlier co-ordinate bench.

On the next day, an application for stay of the judgment was moved stating that the authorities were taking hasty plans to cut down the trees taking advantage of the holidays in the Supreme Court. The petitioners therefore sought a stay until they move the SC against the judgment. But a special bench of the Bombay High Court on Saturday dismissed the stay application.

The authorities proceeded to cut down trees in the region amidst the curfew imposed under Section 144 CrPC to ward off protesters. Several protesters were arrested by police on Saturday and Sunday.

Over 2000 trees in the Aarey colony were proposed to be axed for the construction of a metro car shed for the Mumbai Metro Rail Corporation Ltd.

According to the environmentalists, the Aarey colony, measuring 1,287 hectares and located adjoining to the Sanjay Gandhi National Park, is a major green lung of the metropolis.