A notable feature of the guidelines issued by the Union Ministry of Home Affairs for the fourth phase of lockdown from May 18 to May 31 is the dilution of the mandatory condition for the use of 'Aarogya Setu', the contact tracing app developed by the National Informatics Centre in the wake of COVID-19 pandemic.

The directive in the guidelines issued on Sunday, May 17, states :

"With a view to ensuring safety in offices and work places, employers on best effort basis should ensure that Aarogya Setu is installed by employees having compatible mobile phones" (emphasis supplied)

It is further stated :

"District authorities may advise individuals to install the Aarogya Setu application on compatible mobile phones and regularly update their health status on the app".

These directives are in contrast with the compulsive tone of the previous guidelines issued on May 1, in which it was stated :

"Use of Aarogya Setu app shall be mandatory for all the employees, both private and public. It shall be the responsibility of the Head of the Respective Organization to ensure 100% coverage of this app among the employees".

The violation of this direction would have exposed them to criminal prosecution under Section 188 of the Indian Penal Code and the penal provisions under the Disaster Management Act 2005.

The latest guidelines also clarifies that the previous lockdown guidelines have ceased to have effect. 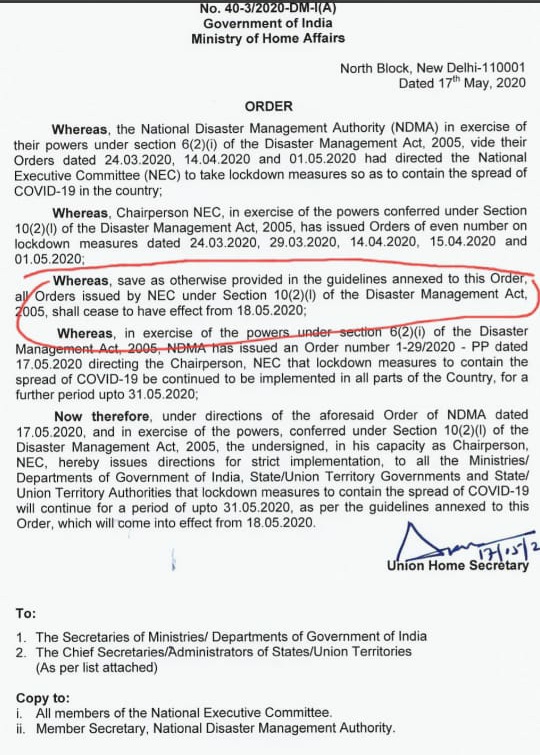 The constitutional validity of the mandatory direction for use of 'Aarogya Setu' has been challenged in a slew of writ petitions filed in the High Court of Kerala. The petitioners submitted before the Court that the mandatory condition was unreasonable and arbitrary, as all the employees do not have smart phones.

How 'Aarogya Setu' Can Be Made Mandatory When Many Workers Have No Smartphones, Kerala HC Asks Centre

Compared to the mandatory tone of the previous condition, the present condition has an advisory tone, and the employers are urged on best effort basis to ensure the use of app by employees having compatible mobile phones.