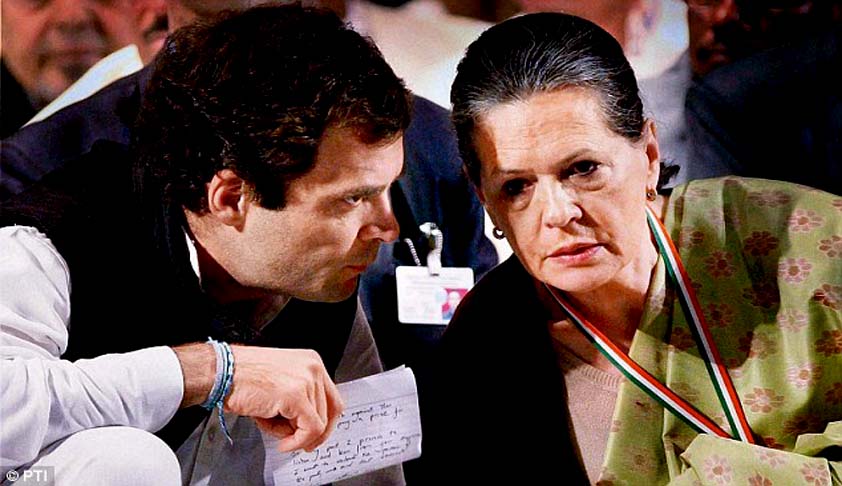 The Supreme Court on Friday dismissed as withdrawn, a plea filed against Indian National Congress, Sonia & Rahul Gandhi, seeking details of a an alleged agreement signed in 2008 between the then ruling INC-led party & Communist Party of China.A bench headed by CJI SA Bobde asked the petitioner to withdraw the petition and approach the High Court.The bench also noted that...

The Supreme Court on Friday dismissed as withdrawn, a plea filed against Indian National Congress, Sonia & Rahul Gandhi, seeking details of a an alleged agreement signed in 2008 between the then ruling INC-led party & Communist Party of China.

A bench headed by CJI SA Bobde asked the petitioner to withdraw the petition and approach the High Court.

The bench also noted that the averments thus made in the petition were somewhat absurd.

"How absurd!. You are saying a political party has entered into an agreement with China?" said the CJI.

"Within our limited experience, we have unheard of it that a political party is making an agreement with another country", the CJI added.

"We will allow you to withdraw this and file a fresh petition. We will examine what you say in the petition and if we find any false statement, we may prosecute you", Court said .

Senior Advocate Mahesh Jethmalani appeared for the petitioner and sought an adjournment in the plea in the beginning however the bench asked him to withdraw and approach the High Court.

The petitioner has alleged that high-level information was exchanged between China & INC vide this agreement.

The petition further seeks for an investigation into the same by the National Investigation Agency (NIA) under the Unlawful Activities (Prevention) Act, 1967, or, as an alternative, by the Central Bureau of Investigation (CBI).

Filed on behalf of Advocate Shashank Shekhar Jha and Founder and Editor-in-Chief of GoaChronicle Savio Rodrigues, the plea states that the "Petitioners firmly believe that the Nation's security cannot and shouldn't be compromised by anyone. Therefore, this Writ Petition has been moved under Article 32 of the Constitution of Bharat, which seeks to bring transparency and clarity regarding the agreement signed between the Respondent No. 1 and the Communist Party of China (herein CPC) which is also the de-facto government of People's Republic of China (Herein China)."

The agreement in question refers to a Memorandum of Understanding (MoU) signed during the United Progressive Alliance (UPA) Rule on 07.08.2008 and the CPC for "exchanging high-level information and cooperation between them".

"The MoU also provided the two parties with the 'opportunity to consult each other on important bilateral, regional and international developments'."

The plea goes on to refer to news reports regarding alleged multiple intrusions/face-offs between 2008 to 2013, instigated by China when the UPA was in power. However, despite demands of Petitioner No.2 in an editorial dated 18th June, 2020 to make the MoU public, it has not been done so.

It has been averred in the petition that INC signed the agreement, despite having a hostile relation with China, and hid the facts and details of the same from the citizens of the country.

Furthermore, though INC brought in the Right to Information Act during its rule, it has "failed to be transparent in this matter which is of national importance".

In light of the above, the plea seeks for an investigation by either the NIA or the CBI to be conducted into the nature of the MoU, which shall be monitored by the Supreme Court.