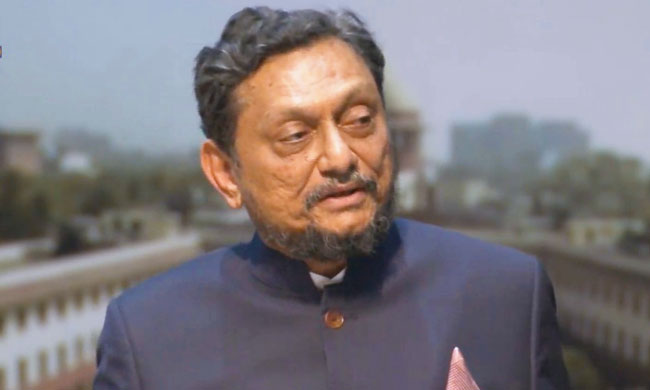 "This regime of virtual hearings via video conferencing has brought to the surface a new form of inequality, which is difficult to deal with because access to justice is now technologically-dependent. It is difficult for those who don't have access to technology. I would like to draw the urgent attention of the Law Minister who is also the Minister of Electronics and IT to see if the...

"This regime of virtual hearings via video conferencing has brought to the surface a new form of inequality, which is difficult to deal with because access to justice is now technologically-dependent. It is difficult for those who don't have access to technology. I would like to draw the urgent attention of the Law Minister who is also the Minister of Electronics and IT to see if the situation can be remedied...of course, it would be at a great cost to the government", said Chief Justice of India SA Bobde said today.

He was speaking at the Constitution Day function organised virtually by the Supreme Court.

"The Constitution gives identity to more than 1 billion people, protects their lives, rights and their destiny".

"When the pandemic struck, we were aware that the virus threatened the rule of law and threatened to completely block access to justice, and that there had to be an instant mutation. The choices that we had were either to do virtual hearings via videoconferencing or to shut down the courts completely", he said.

"Amidst the pandemic, the court dealt with different situations of migrant workers, of dead bodies not receiving burial on account of the fear of infection, inadequate hospital beds, cost of treatment etc. The court even looked into the spread of Covid in jails. We said 'Release them', including those facing incarceration in the detention centres in Assam", elaborated the CJ.
"I would also like to commend the lawyers, litigants, judges, court staff who have extended cooperation in making virtual courts possible. Of course, there are been instances of rage, depression of those staffing the system and the Supreme Court has set up a center for mental health. If the court had not been suspended, the virus would spread like wildfire among the lawyers, the litigants, the clerks and the court staff", he explained.
"It is not pleasant to announce that the Supreme Court is suffering the most. While the courts across the world are speaking of cases in single digit numbers, here, the cases have been in hundreds and thousands, of which many deal with Fundamental Rights. The courts of India have performed better than that of other countries. The Supreme Court has disposed off 14,859 cases since the lock down, all the High Courts together have disposed off 1.5 lakh cases, and the subordinate courts across the country, some 4.5 lakh. This has been possible through the cooperation and devotion to duty of the judiciary and the staff of the registry whose courage to come to the courts is exemplary. There has also been extraordinary cooperation by the Supreme Court Bar Association and the other bar associations", he continued.
Asserting that the Constitution is suprema lex, he pointed out that the rule of law, which originated much earlier, has been embodied in every aspect of the Constitution. He quoted the words of Dr. S. Radhakrishnan, in as much as the former President of India had said, 'Dharma, righteousness, is the king of kings.It is the ruler of both the people and the rulers themselves. It is the sovereignty of the law which we have asserted." "All the three organs of the State are important for securing the rule of law. The timeless principles of the Constitution, that is justice, liberty and equality, would not be possible to achieve without the rule of law", stated the CJ.
"The purpose of the Constitution is to limit the authority of the organs of the state, otherwise there will be utmost tyranny and oppression. If the legislature is free to make any law, if the executive is free to take any decision, and if the judiciary is free to give any interpretation, there will be utter chaos...The separation of powers does not contemplate any rivalry or antagonism between the three organs but only a separation of functions; there is unity of goals for all. The Supreme Court has held on several occasions, including in the landmark case of Kesavanada Bharati, that the three organs are to operate in harmony", he continued.
He expressed that over the past 70 years, the judiciary has discharged its duty as a "sentinel on qui vive". "Courts have been called upon to determine questions of the freedom of speech, the right to life and liberty, right against exploitation, freedom of religion and cultural rights, privileges, limitation of power...Adjudication of rights includes an assertion of the correlate of duties", he voiced.
He quoted Dr. B. R. Ambedkar, in as much as the latter has articulated, "However good a constitution may be, if those who are implementing it are not good, it will prove to be bad. However bad a constitution may be, if those implementing it are good, it will prove to be good"
"So there is clear exhortation to us all in the Executive, the Judiciary, the Legislature to turn out a good lot", remarked the CJ.
He pointed out that in their preface to Durga Das Basu's commentary on the Constitution, Justices Y.V. Chandrachud and S.S. Subbramani expressed that "When India's neighbours were still wallowing under political oppression and economic underdevelopment, India itself had done very well through its Constitution"
The CJ asserted that in view of the heterogeneity of personal laws, language, religion, caste, community, region, etc, the challenges to the Supreme Court of India have been unlike before any other. "However, I believe in the bright future", he said.
He concluded his speech, recounting Justice Hidayatullah's warning, in his judgement, towards breaches of law – "He had stated that if we condone an evil as a necessary evil, it becomes more and more necessary and less and less evil. We must remind ourselves of this. But I must say that the courts have learnt quickly and well"