Limit The Number Of Adjournments And Fix Outer Limit For Disposal Of Cases To Reduce Pendency:VP Venkaiah Naidu 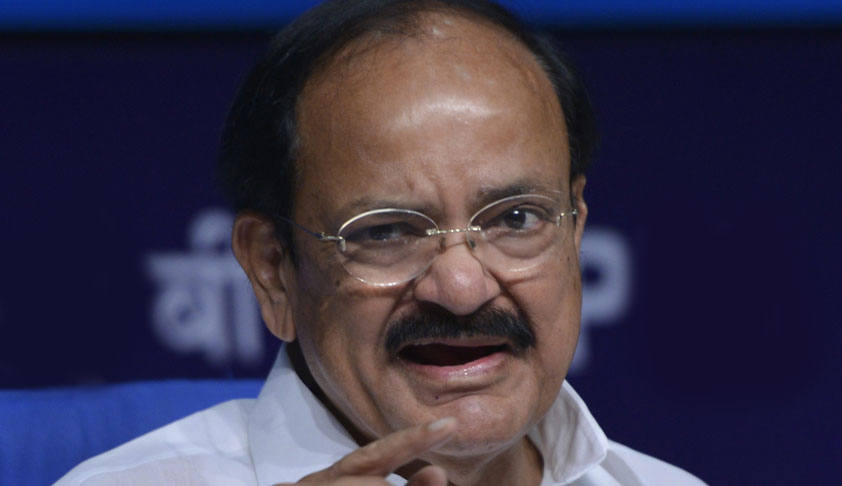 x
Vice President has called for induction of capable judges and quality lawyers besides improving the quality of legal education to enable delivery of justice in time.

Addressing the gathering at a book release ceremony, Vice President of India and Chairman of Rajya Sabha, M. Venkaiah Naidu expressed his concerns over prolonged litigation and mounting number of pending cases in the Indian judicial system, and suggested setting up of regional benches of the Supreme Court to accelerate disposal of matters. Naidu suggested various reforms to ensure...

Addressing the gathering at a book release ceremony, Vice President of India and Chairman of Rajya Sabha, M. Venkaiah Naidu expressed his concerns over prolonged litigation and mounting number of pending cases in the Indian judicial system, and suggested setting up of regional benches of the Supreme Court to accelerate disposal of matters.

"It is time to consider to evolve Standard Operation Procedures that specify the number of adjournments permissible and the outer limit for disposing of cases based on the nature of cases. Judges and advocates need to imbibe time discipline and adhere to SOPs to ensure speedy justice".

Remarking that the judiciary was burdened with 3 crore cases pending in different courts across the country with some of them pending for over 50 years, Naidu suggested bifurcation of the Supreme Court. He stressed on the need to establish regional benches at Delhi, Chennai/Hyderabad, Kolkata and Mumbai under Article 130 of the Constitution, as was suggested by the Law Commission in its 229th Report.

He also endorsed the recommendation of the Parliamentary Standing Committee on Law and Justice to split the Supreme Court into two divisions, viz. Constitutional Division and Courts of Appeal.

He urged both the government and the judiciary to quickly induct "capable judges" as well as "quality lawyers", apart from providing adequate infrastructure, to address the current crisis.

"Government has enhanced the number of judges in the Supreme Court by 10% but I am afraid it may be still inadequate".

"It would be better if judges at various levels are exposed to special orientation programmes organised by the judiciary itself on various technical and specialised branches of emerging laws and the attendant issues and processes," he added.

Remarking that "Judges and advocates need to imbibe time discipline and adhere to SOPs to ensure speedy justice," he went on to support imposition of caps on number of adjournments and time limit for disposal of cases by evolving the Standard Operating Procedures.

Naidu also suggested review of the Anti-Defection Laws to plug its loopholes and set time limits for the Presiding Officers of various legislatures to decide on defection matters.

"I would suggest that we should have special judicial tribunals which will decide the cases within a reasonable time of, let us say six months or at the most one year. I would also suggest we revisit the 10th Schedule of our Constitution, containing anti-defection provisions, to ensure a time bound disposal of such cases and make it more effective by plugging loopholes," he said.

He also recalled late Advocate P.P. Rao for propounding the doctrine of 'Common Thread' and his instrumental role in pioneering of 'Curative Petition'.

The doctrine of Common Thread propounded in the S.R Bommai's case justified imposition of President's Rule, while a Curative Petition is filed when a Review Petition for correcting a wrong committed by the Court is rejected.

"The Principle of Propriety which guided Late Shri P.P. Rao all through his forty year-long legal profession and the values of the old world he upheld are worthy of emulation by the present generation" Naidu said.

"PP had an independent mind and was not a regime lawyer. He was guided by the principles he believed in and functioned within the boundaries of law and the principles of decorum in the courts. He was a true representative of the 'Charm of the old world' and is worthy of emulation by the present generations," Naidu concluded.