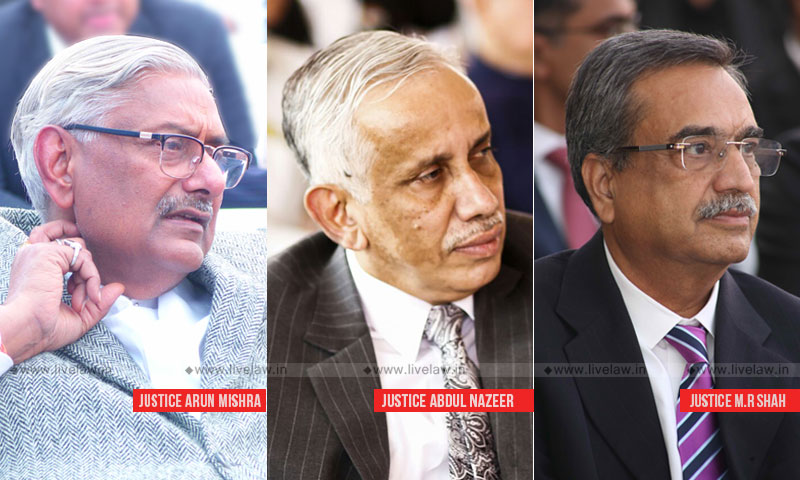 The Supreme Court on Monday sought the Centre's response on whether Telecom Spectrum can be sold/auctioned in the insolvency proceedings faced by the telecom companies.The Court posed this query while examining the bona fides of bankruptcy claims of Reliance Communications, Aircel and Videocon. A bench of Justices Arun Mishra, S. Abdul Nazeer & MR Shah also directed Solicitor General...

The Supreme Court on Monday sought the Centre's response on whether Telecom Spectrum can be sold/auctioned in the insolvency proceedings faced by the telecom companies.

The Court posed this query while examining the bona fides of bankruptcy claims of Reliance Communications, Aircel and Videocon.

A bench of Justices Arun Mishra, S. Abdul Nazeer & MR Shah also directed Solicitor General Tushar Mehta to file an affidavit responding to the issuance of contempt against officers of the Department of Telecommunications (DoT) in terms of the show cause notices issued against telecom department official who had 'passed an order' stating no coercive action should be taken against the telcos for not sticking to the Supreme Court's stipulated January 23 payment deadline.

The Solicitor General stated that the Officers had tendered an unconditional apology but the Top Court insisted to bring the same on record vide an affidavit.

"Apology is fine. But file an affidavit. We will consider it" said Justice Mishra.

After hearing the Solicitor General for DoT & counsel on behalf of Reliance Communications & Aircel on the aspect of Insolvency proceedings enunciated by the errant companies, the bench adjourned the case for further hearing on August 14.

The order on the application moved by DoT to allow telecom companies to pay off the AGR dues worth Rs 1.47 lakh crores in a staggered manner over 20 years is also awaited.

Solicitor General Tushar Mehta, at the beginning of the hearing, apprised Court of the stages of insolvency proceedings in Reliance Communications, Aircel and Videocon.

"All 3 cases are at different stages of insolvency. We raised a point that these companies that have gone for insolvency & showing a spectrum cannot go into this. Govt. is Trustee" said SG.

The Court inquired as to how the interests of DoT can be secured in light of pending insolvency proceedings of the three companies. To this, SG replied that the spectrums cannot be sold as it is not a monetary asset of any company.

Senior Advocate Shyam Divan appearing for the Interim Resolution Professional of Reliance Communications made submissions regarding different stages of insolvency and stated that the resolution plan is pending before the NCLT. At this juncture, Justice Mishra asked Divan how the NCLAT could have revived the proceedings despite payments to Ericsson. Divan was thus directed to file a copy of the the said order.

Senior Advocate Ravi Kadam appearing for Aircel submitted that his client had brought the spectrum with "upfront money" which makes it a transferable asset.

Court also allowed parties to file additional documents, if any.

On August 7, the Top Court had reserved orders in the plea by Department of Telecommunications (DoT) seeking to allow telecom companies to make payments of the AGR dues in a staggered fashion over 20 years.

The bench had also made it clear that it shall not entertain any objections for re-assessment/ re-calculation of AGR in light of the decision passed by Top Court in October 2019 and directed Reliance Communications, Sistema, Shyam Teleservices & Videocon to submit their insolvency details within 7 days.

Court noted that, in doing so it needed to ensure that the IBC was not being misused by companies in order to escape liabilities.

While warning all parties to dispense with payments pertaining to public revenue as had already been directed by the Court, the Justice Arun Mishra led bench expressed reservations regarding keeping the payment of dues pending.

"What is the guarantee that you will not escape? Some of you are foreign companies and may even go into liquidation. What is the security that you can give us?" Justice Mishra had asked.

The bench had also observed that raising demands on PSUs on the strength of AGR verdict was uncalled for. The bench pointed out that the licenses for telecos and PSUs were of different nature, as the latter was not intended at commercial exploitation.

The Department of Telecommunications (DOT) had filed a plea in the Supreme Court for modification of the order dated October 24, 2019 vis-à-vis arriving at a formula for recovery of past dues from telecom service providers.