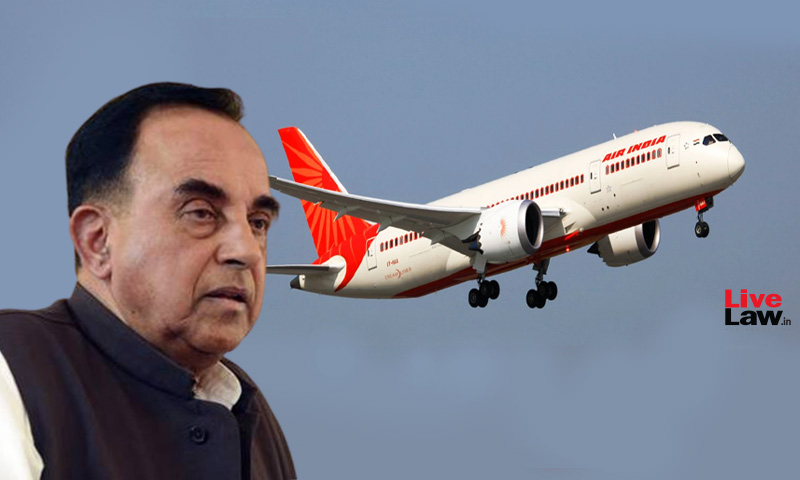 The Delhi High Court has dismissed a PIL filed by BJP MP Subramanian Swamy, seeking to quash the Air India disinvestment process.The division bench comprising of Chief Justice DN Patel and Justice Jyoti Singh rejected the argument made by Swamy that the bidding process was tailor made to facilitate Talace Private Limited acquiring Air India by entertaining a bid on behalf of...

The division bench comprising of Chief Justice DN Patel and Justice Jyoti Singh rejected the argument made by Swamy that the bidding process was tailor made to facilitate Talace Private Limited acquiring Air India by entertaining a bid on behalf of SpiceJet.

"One of the bidders, who submitted the financial bid, was a Consortium in which the lead member was Mr. Ajay Singh but in his individual capacity. SpiceJet Limited was neither a member of the Consortium nor an "Affiliate", on whose net worth, any of the members of the Consortium had relied on, to meet the financial capability criteria, prescribed under PIM."

It added that there is no material on record which would support the allegations of Swamy that Talace colluded with Mr. Ajay Singh's Consortium or was aware of the Consortium's bidding strategy.

The Bench noted that both Talace (the highest bidder) as well as Tata Sons Limited are Indian entities and therefore, no question arises of violation of Foreign Direct Investment Policy, in any event. Moreover, AirAsia (India) Private Limited has no interest in Talace.

So far as methodology of valuation is concerned, the Bench opined that the policy decision to disinvest was taken after following transparent procedure through multi-layered decision making, involving Inter-Ministerial Group (IMG), Core Group of Secretaries on Disinvestment (CGD) and the empowered Air India Specific Alternative Mechanism (AISAM) at the apex Ministerial level, with support for the entire process from reputed Transaction Adviser, Legal Adviser and Asset Valuer.

"As brought out by the Respondents, way back in June, 2017, in-principle approval was accorded by the Cabinet W.P.(C) 15240/2021 Page 16 of 16 Committee on Economic Affairs for the process of disinvestment of Air India and its subsidiaries. This was a policy decision by the Central Government, taken after due deliberations, at various levels and is not open to interference in judicial review by this Court, exercising jurisdiction under Article 226 of the Constitution of India, more particularly in the absence of any illegality or arbitrariness being established by the Petitioner, in the decision making process," the order stated.

Before parting, the Bench also took note of the fact that each day, approximately Rs. 20 crores are being invested to run the Airline by the Government. Thus, any further delay in the disinvestment process shall cause loss to the public exchequer, besides creating uncertainty amongst the existing employees, with regard to their future prospects.

Tata group had emerged as the winning bidder for Air India, the government in October last year signed the share purchase agreement with Tata Sons for the sale of the airline for Rs. 18,000 crore.

In his plea, Swamy alleged that the bid process was arbitrary, corrupt, against public interest and rigged in favour of Tata group. He also alleged that the second bidder was a consortium led by the owner of SpiceJet. However, insolvency proceedings are going on against the company in Madras High Court, it was not entitled to bid and thus effectively there was only one bidder.

Swamy has also submitted that CBI and ED are investigating Tata's joint venture with Air Asia (a foreign airline) which he says is a premeditated conspiracy to illegally grab control of air space of domestic airlines by foreign airlines violating norms of FDI and Cabinet Notes and other laws.

Solicitor General Tushar Mehta, appearing for the Central government, claimed that the disinvestment was a policy decision which was taken keeping in view huge losses to Air India. He further claimed that the decision was taken in 2017 that whenever the disinvestment takes place, up to that date the government will bear the losses and after that the date, the bidder will bear the losses.

He also pointed out that SpiceJet was never a part of the consortium and thus, the proceedings against it are irrelevant to the disinvestment process.

On the allegations pertaining to conspiracy with Air Asia Group, Mehta submitted that Talace Private Limited, which acquired Air India, is wholly owned by Tata Sons and has no relation with Air Asia. Thus, those proceedings are also irrelevant to the case, he claimed.

Senior Advocate Harish Salve appearing for Tata group had urged the Court not to keep the process pending as it involves huge transactions. Further, he stated Swamy has failed to bring on record any material to substantiate the allegations of corruption.