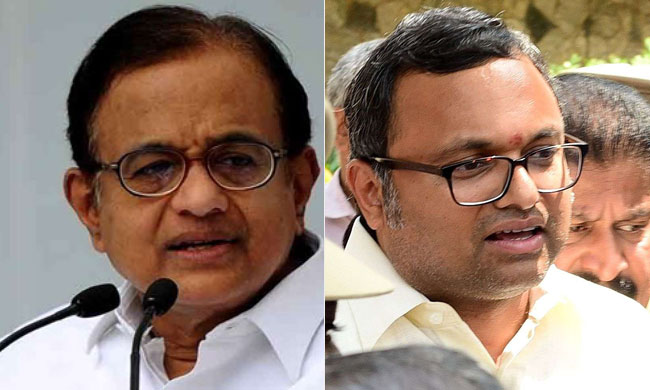 The Delhi High Court on Friday issued  notice to former Union Finance Minister P Chidambaram and his son Karti Chidambaram in the appeal filed by Enforcement Directorate against the pre-arrest bail granted to both in the Aircel Maxis case.

Appearing for the Enforcement Directorate, Solicitor General Tushar Mehta argued that the Special CBI Judge did not consider the judgment of the Supreme Court in the INX Media case while passing its order despite the same having a direct bearing on the present case.

Earlier on September 5, Special CBI Court, Delhi had granted anticipatory bail to the Chidambarams  observing that there was no possibility of flight risk or tampering with evidence as both the accused persons are public figures and have roots in the society. The Special Judge O P Saini also noted that the amount alleged to have been laundered by the Chidambarams were very paltry when compared to the allegations against other accused, who have been granted bail.  "An investigating agency should not discriminate against two similarly situated accused, as it is against the law", the CBI Court said, while allowing the bail applications on direction to furnish a personal bond of 1 lakh each and other conditions.

The Solicitor General submitted before the HC that the Special Judge erroneously based his order on the finding that the amount alleged against the accused persons is paltry and the offences they are charged with are not grave in magnitude.

'The amount of alleged laundering runs into 3500 crores', SG argued.

Justice Suresh Kumar Kait, while inquiring about the FIPB clearness and the amount alleged, pointed out that the challenge against the discharge of Dayanidhi Maran, another accused in the Aircel Maxis case, is pending in the HC. The decision of that case will have a bearing on the present case as well, observed the judge.

Therefore, the court will now hear the present application along with the case already pending against Dayanidhi Maran. The next date of hearing is November 29.

Chidambaram is at present lodged in Tihar jail following his arrest in the INX media case on August 21.

Aircel Maxis case relates to corruption and money laundering allegations pertaining to the FIPB clearance granted for the foreign investment made by Malaysia based Maxis company in Tamil Nadu based network company Aircel in the year 2006. It is alleged that P Chidambaram, who was the Finance Minister then, had received kickbacks for clearing the Rs 3500 crores Aircel-Maxis deal, and the proceeds were routed through the companies associated with his son Karti.

Both the CBI and Enforcement Directorate have registered cases in relation to the transaction under Prevention of Corruption Act and Prevention of Money Laundering Act respectively. The ED filed the complaint on June 13, 2018. CBI had filed chargesheet in July 2018.