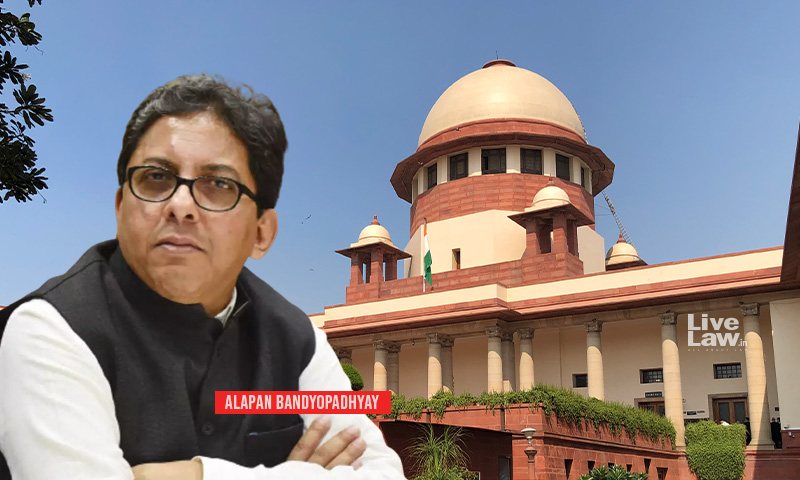 A bench comprising Justices AM Khanwilkar and CT Ravikumar reserved the judgment after hearing Solicitor General of India Tushar Mehta, who appeared for the Central Governemnt and Senior Advocate Dr Abhishek Manu Singhvi, who appeared for Bandyopadhyay.

The Solicitor General assured the bench that no precipitative action will be taken against Bandyopadhyay till the Court delivers the judgment.

Alapan Bandyopadhyay had created headlines in May, following his refusal to attend a meeting chaired by the Prime Minister in Kolkata in the wake of cyclone disaster. Soon after that, the Central Government recalled him to the Delhi. Before that order taking effect, the civil servant tendered his resignation. Later, disciplinary proceedings were initiated against him, which he challenged before the Kolkata Bench of the CAT. The CAT Principal Bench passed an order in Centre's application to transfer Bandyopadhyay's application from Kolkata to New Delhi. The transfer order was set aside by the Calcutta High Court. While passing the judgment, the High Court made certain adverse remarks against the Union Government and the CAT Principal Bench.

The Centre's submissions before the Supreme Court were two-fold : (i) HC lacked territorial jurisdiction; (ii) HC's adverse comments were unwarranted.

"The Calcutta High Court has no jurisdiction over the order passed by the Principal Bench of the Central Administrative Tribunal at Delhi", the SG said. Referring to the decision L Chandrakumar vs Union of India, the SG submitted that it is is territorial High Court which can exercise jurisdiction over a Tribunal.  The High Court committed error by entertaining the matter on the broader concept of cause of action by saying that underlying dispute arose in Kolkata. The concept of "part of cause of action" cannot be invoked while dealing with the challenge against an order passed by a Tribunal.

The Solicitor General submitted that this has a question of serious ramifications, as "disgruntled officers", after retirement, can get cases filed in far away jurisdictions only to trouble the Union by creating artificial cause of action.

SG takes objection to adverse remarks made by the High Court

The Solicitor General also took objection to the adverse remarks made by the High Court against the Union of India and the CAT Chairperson.

"Your Lordships have always said that the High Court in its observations needs to be sober and circumspect. Personal opinions and political views do not have any place while exercising judicial functions.With due respect to the office of the constitutional court, this was not expected", the SG submitted.

The SG said that he was taking serious exceptions to the observations of the High Court such as the Union's modus operandi "reeks of mala fides" and the CAT Principal Bench was "overzealous" to cater to the fiat of the government and paid "obeisance to the diktat of the Union of India".

"Diktat of Union of India? We moved an application in accordance with rules and the Chairman invoked the statutory power. Is the High Court accusing the Chairman, who is a former High Court Chief Justice", the SG submitted.

The SG also expressed surprise at the High Court's observations regarding violation of federal structure. "Where does federal structure come into picture?It is a service matter where the Chairman just transfers the matter from one bench to another. He hasn't touched upon the merits and is only deciding transfer. These are observations coloured with certain political overtones. These should have been avoided", he added.

Senior Advocate Dr Abhishek Manu Singhvi, appearing for Bandyopadhyay, conveyed to the bench that the adverse remarks could be expunged.

"Your lordship can rectify the observations without hurting anyone", Singhvi submitted at the outset.  On the question of territorial jurisdiction, Singhvi submitted that Bandyopadhyay was a person who was always a resident of Kolkata and belonged to West Bengal cadre in IAS and was posted there throughout his service. After retirement also, he is residing at Kolkata. The disciplinary proceedings were initiated after his retirement.

Singhvi referred to Rule 6(2) of the CAT(Procedure) Rules and Section 15 of the Administrative Tribunals Act to argue that the application was maintainable before the CAT Kolkata Bench. He referred to the decisions of the Supreme Court in Brij Mohan and Sadhna Kundu cases. The reliance of L Chandrakumar is misleading, as the said decision has not taken into consideration Article 226(2).

The concept is that Union of India is present throughout the country. It is not that every order of the Union should be challenged at New Delhi only.  The High Court can entertain a writ petition if a "part of cause of action" arises within its jurisdiction.

Responding to Singhvi's submissions that the transfer order was passed by the CAT Principal Bench in a hasty manner, the SG pointed out that the High Court also delivered the judgment within three days of filing of the writ petition.

The Calcutta High Court bench of Justices Sabyasachi Bhattacharyya and Rabindranath Samanta had expressed strong reservations to the manner in which the principal Bench of Central Administrative Tribunal (CAT) favoured the Central government in its attempt to transfer a case moved by Alapan Bandyopadhyay, former Chief Secretary and incumbent Chief Advisor to the Chief Minister from the Calcutta to New Delhi.

The bench with dismay had observed that,

"The entire modus operandi adopted by the Union of India reeks of mala fides. It is unfortunate that the Principal Bench of the CAT nurtured such efforts by passing the impugned transfer order, thereby paying obeisance to the diktat of the Union of India, which has been repeatedly held by the Supreme Court and various High Courts not to be a favoured litigant. Rather, the responsibility of meting out justice and serving the cause of justice is on a much higher pedestal for the Union of India than an ordinary individual litigant."

Setting aside the transfer order, the Bench had observed,

"The order of the Principal Bench not only violates the legal right conferred on the writ petitioner under Rule 6 of the CAT Rules, 1987, read with Sections 35 and 36 of the 1985 Act, as well as the petitioner's fundamental right of equality before the law, as enshrined in Article 14 of the Constitution, which is the grund norm of the Indian legal fabric".

The Court further observed that such an action even by a quasi-judicial authority 'leaves a bad taste in the mouth' and also poses a threat to the federal structure as envisioned by the makers of the Constitution of India.

It was also noted that it is mandatory for notice to be served to the concerned party pursuant to Section 25 of the Administrative Tribunals Act, 1985 (1985 Act).

"The term "desire" used in Section 25 cannot confer unfettered authority on the Chairman to exercise such power according to his whims or fancy but has to be read mutatis mutandis with the prior requirement of notice "to the parties". Thus, it is implicit in Section 25 that notice and hearing must mandatorily be given to the parties and the Chairman's "desire to be heard" has to be qualified by reason and application of judicial mind", the Court observed further.

Bandyopadhyay had moved the High Court challenging the order of the CAT's principal bench dated October 22, 2021 allowing Centre's transfer petition in the case filed by Bandyopadhyay before the Kolkata Bench of CAT.

Bandyopadhyay was embroiled in a tussle between the Modi government and Mamata Banerjee's state government back in May 2021. The central government initiated action against him after he failed to be present to receive Prime Minister Narendra Modi at the Kalaikunda airbase in West Midnapore.

His tenure as the Chief Secretary of West Bengal was cut short after the Centre in May 2021 had asked him to report to New Delhi. Soon after, Bandyopadhyay resigned and an inquiry was initiated against him by the Centre.