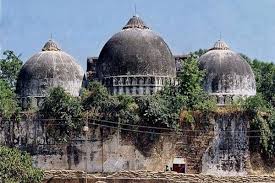 The All India Muslim Personal Law Board has decided to reject the 5 acres land proposed to be allotted to it for building a mosque in Ayodhya.

"Mosques are essential for religious practice of Muslims. Building the same Mosque at some other site in situations like this, is also not permissible as per Islamic Law," a statement from the AIMPLB read.

A five judges bench of the Supreme Court had, on November 9, in a unanimous decision held that the disputed land in Ayodhya belongs to the Hindu deity Ram Lalla. At the same time, the Court held that an alternate plot of 5 acres must be allotted to the Sunni Waqf Board for construction of mosque. This direction was passed invoking powers under Article 142 of the Constitution. The Court observed that the destruction of Babri mosque in 1992 was a violation of law. The act of placing idols beneath the central dome of the mosque in 1949 was an act of "desecration", observed the Court.

"All litigants protecting Babri Masjid, including Sunni Wakf Board, have always reposed trust in our representative capacity for various issues of Muslims including the present one. In that capacity, we on behalf of the community at large, make it clear that the 5 acre land, as directed in the present judgment, will neither balance equity nor repair the damage caused in the country. Accordingly, on behalf of the Muslim community, we decline to accept the said 5 acres of land to be allotted in terms of judgment dated 09/11/2019," AIMPLB said.

The Board also said that it had contested the Ayodhya Land Title Dispute case to "secure" the fundamental values of the Constitution viz., "acceptance of equality of all religious faiths" and that the same could not be compensated by allotting an alternate land.

"We feel that the restitution by granting 5 acres land where fundamental values have been damaged to the extent of causing national shame, will not in any manner heal the wounds caused. Even otherwise the effect of this direction would amount to shifting the mosque from one place to another by judicial order without any provocation by the community, which always tried to protect this Mosque."

In its closing remarks, the board said that it hoped that the government will ensure protection of all of its religious structures that had been encroached upon and will do justice to them.

"We expect, the system would recognize equal rights of the Muslim Community in various fields including for protection of our religious structures, graveyards, educational institutions and more importantly eviction and use of all the Wakf properties that have been unauthorizedly occupied by different people/entities including the government instrumentalities."