'All Reservations May Go And Only EWS May Remain; But That's A Matter Of Policy' : Supreme Court In Maratha Quota Case [Day 9] 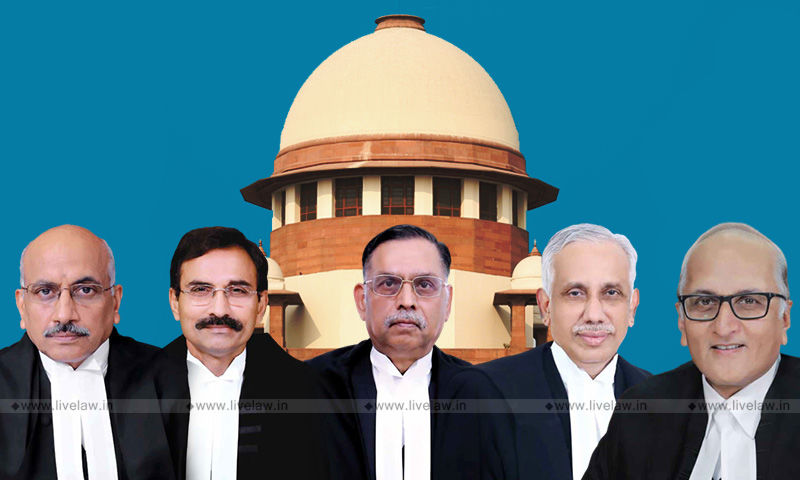 On the 9th day of the proceedings pertaining to the challenge to the Maharashtra SEBC Act, 2018, a Constitution Bench of the Supreme Court observed that it was for the Government to take a decision on whether caste and reservations should go.A 5-Judge Constitution Bench of Justices Ashok Bhushan, L. Nageswara Rao, S. Abdul Nazeer, Hemant Gupta and S. Ravindra Bhat remarked that...

On the 9th day of the proceedings pertaining to the challenge to the Maharashtra SEBC Act, 2018, a Constitution Bench of the Supreme Court observed that it was for the Government to take a decision on whether caste and reservations should go.

A 5-Judge Constitution Bench of Justices Ashok Bhushan, L. Nageswara Rao, S. Abdul Nazeer, Hemant Gupta and S. Ravindra Bhat remarked that these were policy matters and were in the domain of the Parliament as well as the Legislature. It was further noted that this could be the beginning of all reservations going, with only quota for Economically Weaker Sections remaining.

"This may be a beginning, all reservations may go and only EWS may remain, but these are all policies", Justice Ashok Bhushan, the presiding judge of the bench, orally remarked.

Appearing for SCBC Welfare Association in an Intervention Application, Pingle submitted that "caste" as an elephant in the room had to be addressed, and that it was being being politicised with the Indra Sawhney judgement being utilised as a ground for extending reservations.

"Endeavour should be made to remove caste-based reservations in a phased-manner", stated Pingle, to which the Court responded that while the ideas were "radical and good", it was for the Government to take a decision on dismantling caste and reservations.

"That is for the Parliament and Legislature. When the Constitution was enacted, the object was a caste-less and egalitarian society. This may be a beginning, all reservations may go and only EWS may remain, but these are all policies", noted Justice Bhushan.

Pingle then submitted to the Court that 30 years had passed after Indra Sawhney and that if a mistake was made, then generations of people would suffer.

"Since this case has a larger magnitude on the social life of the country, it may be appropriate to consider all the cases which are pending and then take a holistic view. Over-reservation is anti-reservation", averred Pingle.

Divan submitted that there was no need to reconsider Indra Sawhney and that the 50% limit should be retained.

"We are more equal now than we were 70 years ago. The focus needs to be on other forms of affirmative action. If the 50% limit is breached there will be political pressure not to reduce reservations. Once it's breached, it will become impossible to backslide."

Divan further raised the point that Constitutions and constitutionalism were about balancing, and that the essence of the 50% limit was that it balanced the aspirations of different elements of society and the interests of those who were not gaining from reservations.

He concluded that the SEBC Act had to be struck down for having breached the 50% limit and for having no real justification for doing so, and that the Gaikwad Committee material was not adequate.

Sancheti commenced his submissions by informing the Court that there was not only political domination, but dominance in other fields as well.

"See the statistics. Marathas comprise 40% posts in the open/general category. That itself is enough to show that there is adequate representation. They have awarded marks out of 25 and based on marking system, they claim that Marathas are backward. If you follow this marking system, then everybody would be backward, even the so-called open category."

In response to the Court's observation that submissions had been made on the poor living conditions of Marathas, Sancheti submitted that the Commission had gone to the most backward areas of the State to discern the same.

"The survey must cover the entire population and it must cover all castes and groups. We are talking about relative backwardness within the State. Backwardness is a relative concept, not an absolute concept", concluded Sancheti.

Sankaranarayanan began his arguments by stating that the contours of federalism as a feature of the basic structure had to be drawn and then one had to see if the challenge fell within those contours.

"There are six cases which involved a basic structure challenge which the Court allowed – Kesavananda Bharati, Indira Gandhi, P. Sambamurthy, Chandrakumar, Minerva Mills and the NJAC judgement. In all these cases, the principles on which the Constitutional amendment was struck down were exclusion of judicial review, free and fair elections, independence of judiciary".

Sankaranarayanan submitted that if the Court had to look into a Constitutional challenge today, it had to discern whether the insertion of Articles 338B, 342A, 366(26C) upset the gentle balance between the State and the Centre.

In response to the Court's question on why there was a sudden need to unify the Centre and the State Lists in 2017, Sankaranayan stated, "The only guess I can hazard is what Dr. Dhawan said that repeatedly we have had caste groups blocking roads, causing violence and State Governments being put to sword. This kind of terrorism and civil strife is perhaps why the Parliament feels it is best to centralise".

It was also averred that a challenge to a Constitutional amendment had to be so extreme and unconscionable that it would shake basic structure, and that the 102nd amendment did not do that.

"After 342A, there is one list. Usage of 'Central' is to re-emphasise, clarify and get around Indra Sawhney. There is no need to disturb it or the 50% limit. High Courts have consistently applied this rule. Only the government has breached it to extend an olive branch in order to placate various groups."

"The arguments have not addressed the validity of the SEBC Act which has to be tested on the Indra Sawhney judgment and the law on the date of the particular Act. There has been no argument to show how the SEBC Act is valid and how the High Court judgement is consistent with Indra Sawhney".

He further submitted that 50% was an inviolable rule, and the submission that the limit should be breached due to changing social dynamics was untenable on facts.

"50% limit on reservations has been given a certain amount of legal stability and certainty. I shudder to think what will happen if this is removed. It is like a dam without which there will be a flood of populist theories in election. Ultimately there are limits to power. Whatever the legislature wants to do in terms of affirmative action, it can do but the 50% line should not be crossed", concluded Datar.

Matter will continue tomorrow. Attorney-General KK Venugopal and Solicitor-General Tushar Mehta will be providing their Reply to the submissions.